The Edmonton food scene in 2022 was a year full of tension. While this blog is primarily about restaurants, it is impossible to ignore the ballooning disparity between those who can eat out and those who can eat at all. It was reported that Albertans have the highest rate of food insecurity in Canada, while food bank usage in the province more than doubled the national rate of increase.

On the restaurant front, several long-standing restaurants closed, some due to declining revenue, while other independent restaurants were able to embrace opportunities to expand. Blue Plate Diner, an 18 year veteran, shuttered over the summer, while The Nook, Pho Boy, and Ono Poke all closed after five or more years in business.

Despite the losses, it was a pleasant surprise that so many small restaurant groups were able to grow their footprint in our community, and offer more unique choices for diners all across the city. These included: El Corazon and Leopard in Glenora; Takam Market at MacEwan University; Hayloft and Woodshed Burgers in Cameron Heights; Seoul Fried Chicken, Northern Chicken, and Birdog on 104 Street Downtown; Pal’s in Old Strathcona; and additional locations for The Colombian and Remedy Cafe in Parkallen and the University of Alberta campus, respectively. 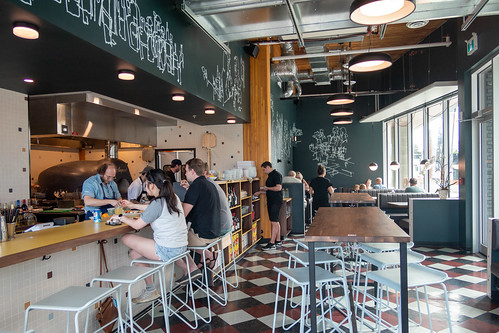 Leopard was among the new additions to Edmonton’s food scene this year (photo credit: Mack Male)

It’s also worth noting that Windermere in particular had a banner year in attracting hospitality brands. The chain-loving spirit in Edmonton was in full force with the openings of California Pizza Kitchen and PF Chang’s. But those splashy outposts were joined by independents Black Pearl, Hello Mochi, Flame & Barrel, and Japonais Bistro (to open in 2023).

As inflation continues to increase, the reality of operating food businesses will be even more challenging. But after talking to many restaurant owners over the year, my takeaway was their gratitude towards their loyal supporters in these times. I am hopeful that this theme will continue into 2023.

You can check out previous year in reviews here (though I missed last year!).