After four years on the organizing committee of Eat Alberta, Mack and I had decided to let a new group of individuals take the reins. One year later, it meant we could, for the first time, enjoy the day as participants!

Eat Alberta, started in 2011, promotes hands-on learning about how to prepare local food. Held at NAIT, the Eat Alberta model has always involved engaging instructors drawn from our community, initiating connections that can continue past the event itself.

As we knew from our involvement, certain tracks (tickets are sold for pre-set groupings of classes) tend to sell out right away, so we made sure to get a jump on our preferred track right away. We were rewarded with two tickets to the Foothills track. Priced at $150 each (unchanged from 2014), I know some still think tickets are steep. But given individual cooking classes at other venues are upwards of $100-$140, the fee, which covers the cost of four workshops plus two plenary sessions, breakfast, lunch and a wine down, is more than fair.

We started off the day with a keynote from Takota Coen of Grass Roots Family Farm. He spoke about his operation, which not only utilizes a permaculture philosophy for their vegetation crops, but also promotes the practice for their animals (for example, the cohabitation of cows and pigs ensures even the cow manure doesn’t go to waste – the pigs root through for nutrients the cows are unable to digest). To help finance some of their long-term perennials, which they hope will provide food for decades to come, Grass Roots employed an interesting multi-year Community Supported Agriculture model, where investors would reap their share not over one growing season, but over several years. Takota definitely piqued my interest – I’m sure exploring the farm in person would provide even more perspective.

Our first workshop was with Chef Allan Suddaby, who we were fortunate to work alongside with during our years organizing Eat Alberta. Since then, Allan has become the Executive Chef of Elm Café and all of its properties, which include District Coffee Co., Burrow and Little Brick. We’ve always known Allan’s passion for food and knowledge sharing, but we never had the opportunity to experience it firsthand until his egg cookery class. 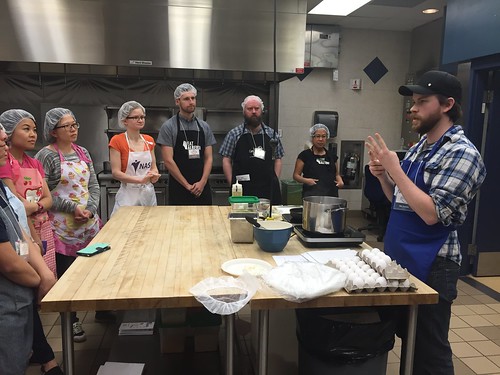 Allan shared tips and tricks on how to properly hard boil, poach and fry an egg – seemingly basic, but essential skills to master. To fry eggs on a less than non-stick pan, try using parchment paper – it’s better than Teflon! And perhaps most revelatory for me – Allan demonstrated how easy it was to make mayonnaise from scratch: whisk an egg yolk with a splash of vinegar, get it started with just a bit of oil, then work in up to a cup of oil. Magic! 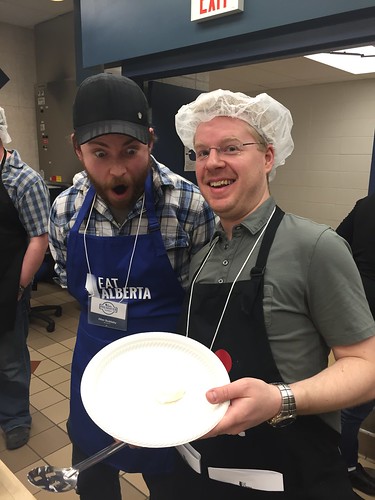 Next, we moved onto mastering dumplings with Ray Ma of Honest Dumplings. You may be familiar with Honest Dumplings from local farmers’ markets; they specialize in handmade dumplings with creative flavour combinations using local products. Although Mack and I have made our own dumplings before, we’ve never attempted creating the dough from scratch. 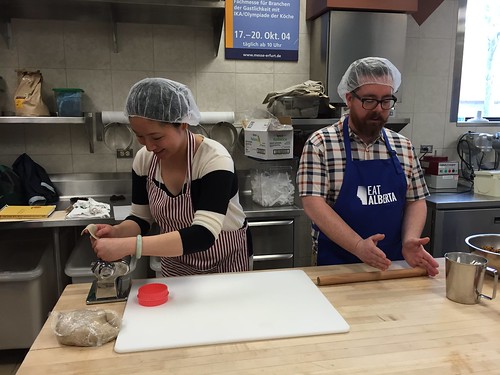 Ray was a great teacher, and she made the dough recipe seem very approachable: 1 cup of water + 1 cup of all-purpose flour (instead of water, some vegetable juice can be substituted for colouring, or pliable ingredients, such as chives, to stud the wrappers). After kneading for 7 minutes, the dough will need to be chilled for 30 minutes or overnight. Then, using a pasta roller, working from 0 to 6 settings, the dough is rolled out and cut into rounds to be filled. That morning, we made vegetarian and meat dumplings, but the latter – a quinoa maple pork belly, were definitely our favorite! 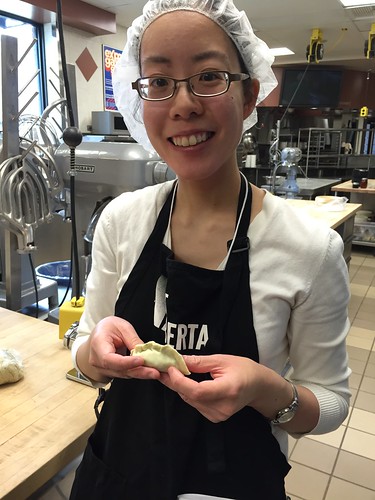 After lunch, we headed back into the kitchen for a lesson on the ramen egg and miso broth with Chef Wendy Mah. Wendy is the chef behind the popular pop-up Prairie Noodle Shop (mark your calendars: she announced that the date of their next supper is June 20, to take place at NAIT/Ernest’s). 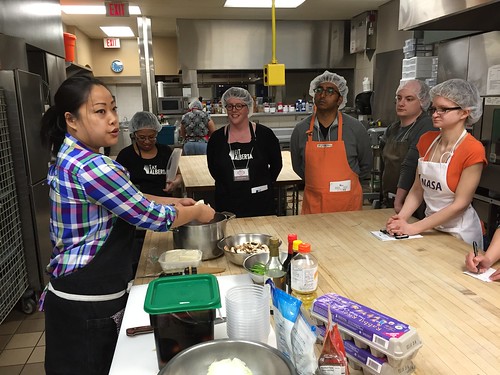 No doubt most in the class were familiar with the instant version of ramen, but it would have been ideal if Wendy started the class with more of an overview of ramen (different bases, composition, etc.). When Wendy was providing some of the ingredients for the soup or eggs, I know I didn’t know what wakame was, for instance. She also blew through the proportions for the ramen egg pickling liquid, assuming we would all find our own combination of the soy, Chinkiang vinegar, mirin and water, and was surprised to hear we all followed her recipe (given it was the first time for most, if not all, of us, it shouldn’t have been). That said, I liked that Wendy had an “Asian mirepoix” that served as the base of her vegetable broth – suey choy, Chinese chives and mushrooms. 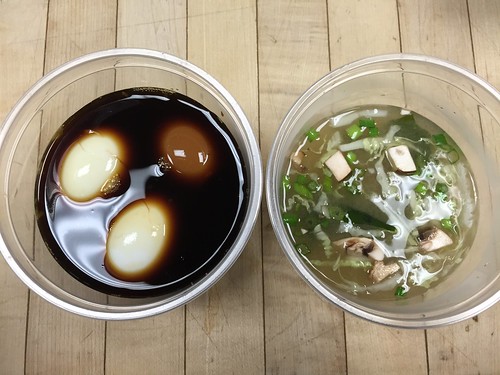 Our ramen eggs and miso soup

Our final session was the perfect cap to the day – a cocktail presentation with Evan Watson of Three Boars. It was only fitting that we started the class by making a drink to sip throughout – an Old Fashioned, made with a dash of spring cherry bitters that Evan had created for us to take home, and Alberta Premium whisky (known for being 100% rye). 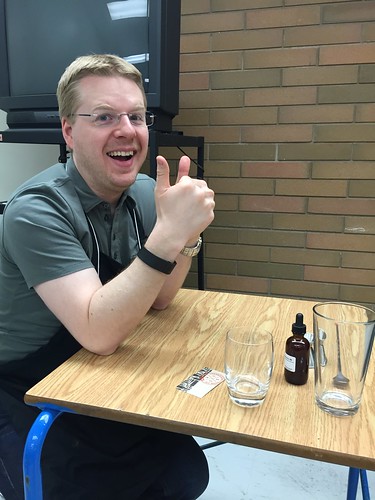 Although the class deviated from its promised focus on how to use local ingredients, it was still a very informative session. Evan is an encyclopedia of cocktail knowledge, and obviously takes his role as an educated bartender very seriously. The session was not only a primer on the history of cocktails, but also on many of the spirits that are mixed into cocktails. If you have a chance to sit at Evan’s bar, make sure you do. 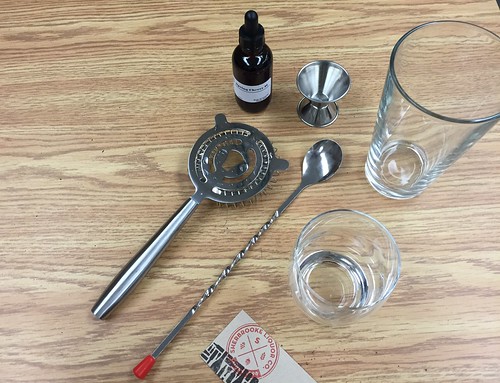 Tools of the trade

The afternoon plenary featured Jennifer Cockrall-King and Eva Pang, who started a discussion about the role of food writers in the Edmonton food scene. Mack thought it was a topic that felt out of place within the context of the day, but it did generate some interesting questions from the audience.

We had been looking forward to the wine down, as we knew Allan was still involved in producing the tasting boards. He didn’t disappoint, putting together another varied and beautiful celebration of local bounty. 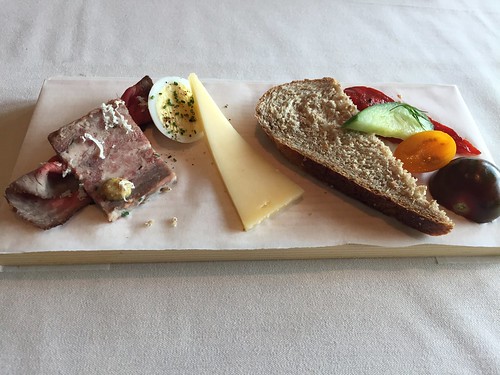 Given Mack and I know how the sausages are made, so to speak, we have to commend the organizers for what looked to be a seamless event. Everything was well-organized, and the attendees we spoke to were having a great time. I would say the classes I attended could have been improved with handouts of some sort, containing tips, recipes, or resource lists, as I only walked away with the notes I made on my own (and I know I probably missed some key points). Alternatively, as one presenter said, the content may be shared online at some point.

But overall, we’d have to say bravo! And given the direction Eat Alberta is looking to move in the future, we want to wish the team the best of luck. Thanks to the organizers, volunteers and presenters who made it a great day.