With today’s return to winter, it seems even more distant, but before my trip to Boston, there wasn’t any better excuse than a gorgeous spring day to cross the river on foot and finally try Farrow’s much lauded sandwich creations. 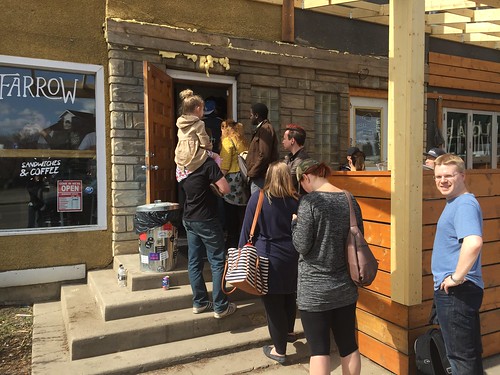 When we arrived at around noon, the line was more than half a dozen deep, spilling out onto the sidewalk. The predominant aroma of bacon, wafting through the open door, kept us firmly rooted in place. The interior of the sandwich counter is predictably straightforward – sandwich art and a few window stools (though everyone ahead of us chose to eat al fresco on the picnic tables outside, or on the raised patio of its neighbouring sister restaurant, Three Boars). I will say I enjoyed Farrow’s simple line and carabineer chit system, to efficiently carry order information to the kitchen on the other end of the counter. 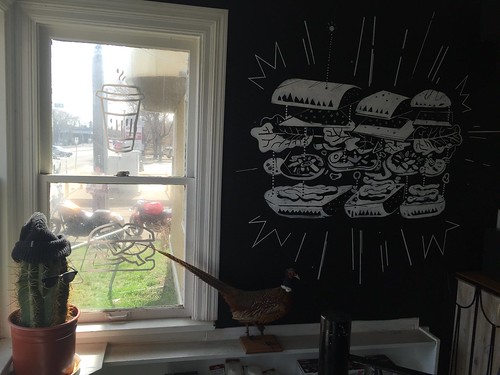 The chalkboard menu proclaimed that one of the four varieties had already sold out for the day. Mack and I both ordered the “grick middle” ($7.25), a name no doubt inspired by their fast food counterparts across the street. But the comparison stops there. 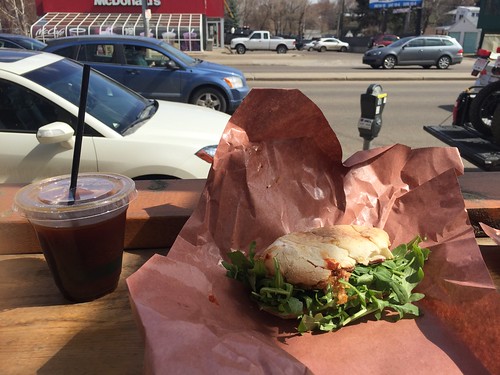 Our butcher paper-wrapped packages concealed a classic but well-made combination of ingredients – crackling bacon, a yolky fried egg, cheddar and a tangle of fresh arugula – you won’t find that at McDonald’s. But my favourite part of the sandwich was actually the bread – squishy and yielding, it let the “middle” sing. Consumed outdoors with a cup of cold brew coffee alongside it, Farrow provided us with the perfect low-key brunch. As a bonus, Farrow has a loyalty card – record 12 sandwiches on a punch card and the next one’s free!

We spent some more time exploring the businesses in “The Bridge District” (that name never took off, did it?), including dessert at Menchie’s and shopping at The Red Pony. It was a nice reminder of what awaits us on the other side of the river, which increasingly, seems to be anchored by Farrow. Get yourself to Farrow soon – it meets the hype and then some.

One thought on “Sandwiches Worth Seeking: Farrow”