The precautions arising from the increasing number of COVID-19 cases in Alberta are significantly impacting the food and hospitality industry.

This week, in an effort to support social distancing measures, recreation centres, libraries, and some local attractions closed to the public, with schools and post-secondary institutions following shortly, closing to students. While there isn’t yet an outright ban on restaurants and bars in Alberta, there is data showing that behaviours have changed. OpenTable released information that shows that over the last weekend in Edmonton, the number of seated diners at their restaurants were down more than 40% compared to the same weekend one year ago.

As a result, many businesses have begun shifting their business models to accommodate people choosing to stay home. Some establishments, including Otto, Love Pizza, Prairie Noodle, and Chartier, have closed their dining rooms entirely, opting for take-out or delivery orders only. Other restaurants who traditionally haven’t promoted or offered take-out, have started doing so, such as Nineteen and Corso 32.

Lastly, there are restaurants that have elected to close temporarily, including Royale, Wildfred’s, Huma, and King Noodle House.

For those out there looking for ways to support the industry in these uncertain times, Linda Hoang wrote a great post outlining ways to do so. 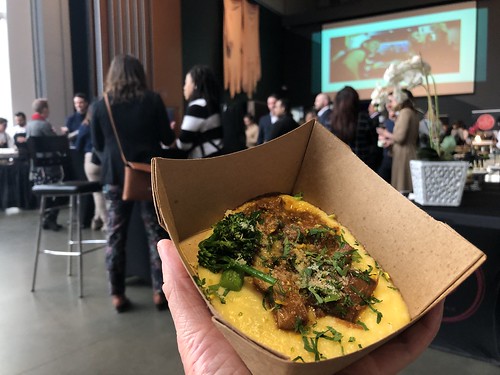 Short rib and polenta from Braven