My friend May was intrigued by the idea of Haus Falkenstein, a small restaurant near Westmount that holds the Guinness World Record for serving the largest variety of pan-fried schnitzels (347, if you were wondering). An article in the Journal back in January reminded the public that the restaurant re-opened after rebuilding from a fire next door, but other than that, there hasn’t been too much buzz about the place. We met up there for dinner a few weeks ago on a Friday night to check it out for ourselves.

Located in a nondescript strip mall, Haus Falkenstein would have to be sought out; it’s not easily stumbled upon otherwise. It was about half full when we arrived, with several large parties on hand.

Décor is kitschy, with clothing and beer mugs on display, and a full wall dedicated to their favourite soccer team. It contributes to the overall charm of the family-run restaurant which started in the small town of Lougheed, southeast of Edmonton. 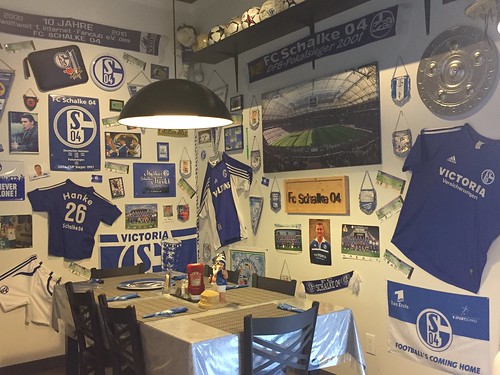 May and I were both a bit overwhelmed by the menu, even if it’s been a bit reduced for every day service to only 67 varieties. They range from more traditional schnitzels with fresh lemon, or fried onions and mushrooms, to more creative options topped with shrimp, eggs and cheese, or ham and pineapple. I decided to keep things classic with the Jäger cream schnitzel

($18.95 with fries), topped with a mushroom-bacon cream sauce. May was a bit more adventurous with her order of the FC Schalke 04 schnitzel ($21.45 with potato salad), topped with homemade curry sauce.

The menu promises freshly cut, pounded, and fried schnitzel, which necessitates some patience. The wait was reasonable though (made easier with a simple salad starter, included in the price), and we were rewarded with hot, made to order plates. As expected, the portion size was generous, but not untenable; as the schnitzel had been prepared very thin, the meat itself wasn’t as heavy as I anticipated, crispy with a nice light breading. The Jäger cream sauce, however, was on the salty side for me, and I much prefer fresh to canned mushrooms. The menu reasons that prices and food waste would be higher if they relied on fresh mushrooms, but that’s a choice they made. 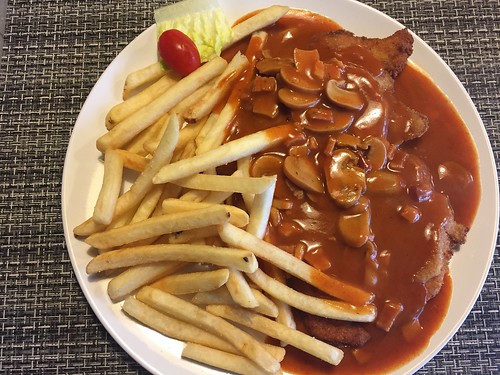 I actually enjoyed the flavour of May’s curry sauce much better, a nice balance of sweetness and a touch of heat. 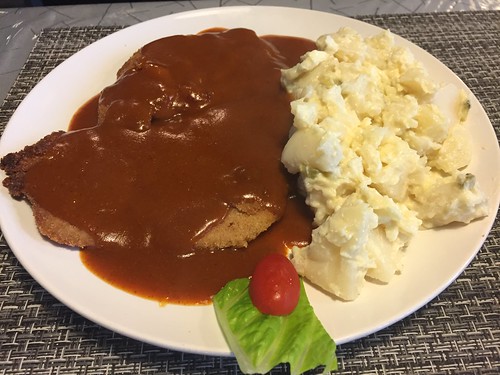 We both agreed that in the future, we’d opt for the potato croquettes instead, as our neighbouring parties had done. The fries didn’t remain crispy for long, and while May didn’t mind her potato salad, it was nothing special.

Service was fine, if perfunctory, though I appreciated that the server asked us how we heard of Haus Falkenstein. She told us it had been full immediately after the Journal piece was published, but only just steady since then. They had recently run some radio ads, but were not certain how else they could increase traffic to the restaurant. It’s not a new challenge in the food business, especially with regards to keeping interest alive in a saturated market. With their central dish seen by some (including me) as an occasional indulgence however, they may have more difficulty securing consistent, repeat business than some other establishments.

That said – they do have a schnitzel for every craving, so I know I’ll be back at some point, with more than a few left to try.