Over the years, Mack and I have been fortunate to visit many of the farms from which we source our food, including Riverbend Gardens, Bles Wold, and Irvings Farm Fresh. In June, we were able to add another to that list – Sunworks Farm.

Although our primary chicken and egg supplier is Sunshine Organic, because they’ve become a part-time vendor in the winter incarnation of the City Market, we often find ourselves at the Old Strathcona Farmers’ Market between October and May. Sunworks Farm has been a staple at that market since for more than 15 years; owners Ron and Sheila Hamilton are a fixture for regulars – Ron tempting passing shoppers with sausage samples and Sheila tending to customers behind the busy counter. Since 2012, their meat and egg products have also been available seven days a week at Blush Lane down the street (in addition to 3 other Edmonton markets and 1 Calgary market). So just how have they managed to grow their business? A few weeks ago, we were invited to learn more about Sunworks from Ron, Sheila, and Issac Fregoso and tour the farm along with a group of other food bloggers. 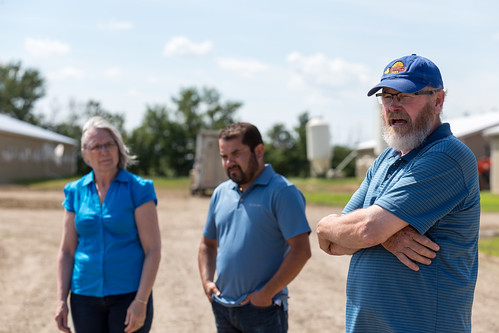 Located about an hour southwest of Edmonton, Sunworks occupies about 400 acres, raising chickens, turkeys, pigs, and beef year-round. When they started back in 1992, Ron shared that he and Sheila raised animals primarily to feed their own family; they had learned about unconventional farming practices and the possibilities of holistic management. This snowballed as friends also wanted their products, and eventually, this led to vending at a farmers’ market in 1998. And while they have grown in that time – from 80 chicks to 130,000 chickens this year – their values have never waivered. Sunworks Farm has been certified organic since 1997, and certified humane since 2005.

I was actually most interested in seeing their chicken coops. Back in May, I had the chance to visit a conventional egg farm – just how different would Sunworks be?

Sunworks receives their chicks about 3 hours after hatching. In the summer, they’re raised in a barn until they have enough feathers to handle colder nights outside (of course, birds are raised wholly indoors in the winter). 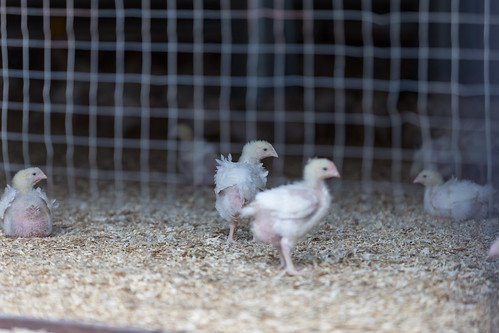 When they’re ready, laying hens and meat birds are relocated into moveable shelters, shifted daily so the chickens can access fresh grass. Nesting boxes line the walls of the shelter, and fresh water is always available. Even with 350 chickens per shelter, the space is roughly double what conventional birds have access to. 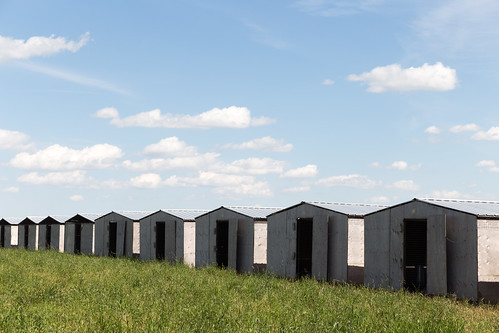 Sunworks has quota for 5,000 laying hens, and harvest about 300 dozen eggs a day. Their hens start laying after about 20 weeks, and are able to produce for one year before being processed as soup hens. 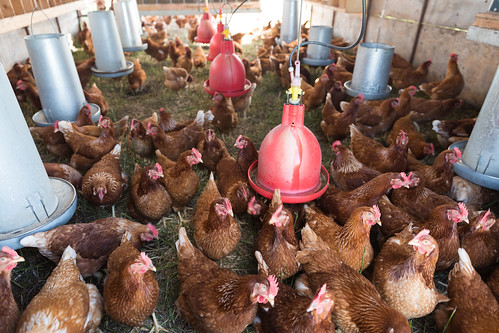 Through experience, they’ve found that the plywood walls are cooler than plastic siding, and a roof is necessary on the back end of the shelter to keep out predators like coyotes and owls. When I asked why the shelters were built so high (unlike other mobile shelters that are lower to the ground), Sheila remarked that besides helping with heat management, they’re also more human friendly – all of their eggs are hand picked. 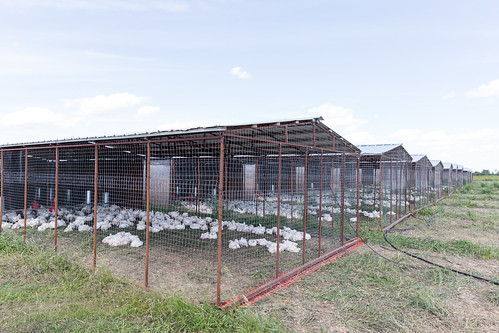 We did notice a couple of chickens who had “flown the coop”, and were just outside of the shelters. These birds had been pecked and will fully recover after a few weeks apart. 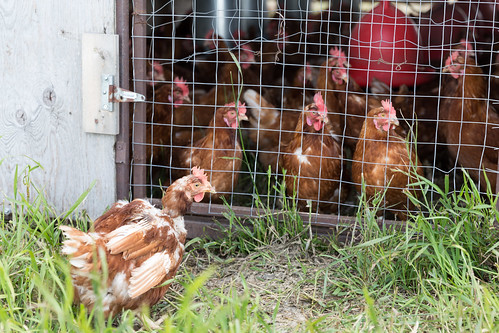 While we couldn’t visit their pigs as they are raised on a separate piece of land, we were able to see the cattle from a distance (they retreated, of course, as our group advanced). Ron said they source their cattle from four different family producers; the breed is less important to them than being able to support other farm families. At present, they have about 65 cattle. They are grass fed their whole lives, supplemented with alfalfa pellets in the winter. Ron believes this produces a leaner product – I can attest to that; we’re big fans of their beef. 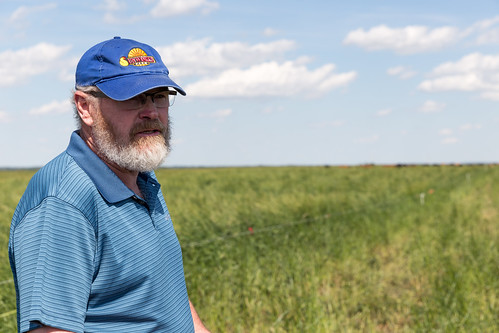 Ron with his cattle in the distance

Like the chickens, the cattle are moved daily so they have access to fresh grass. The other benefit of relocating them frequently is to ensure their manure is spread around as well – Ron remarked that it can take between 50-100 years to create a layer of top soil. Though the land wasn’t in great shape when they moved here 25 years ago, he indicated that much has changed even in that time. It’s important to them that the land is returned in better condition for the next generation. 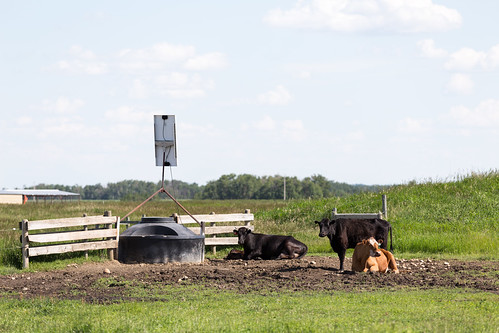 In 2015, Sunworks was able to open their own meat processing facility on site. They can process up to 3,500 birds a day at 1,000 birds an hour. Ron and Sheila are hands on every step of the way – Ron hangs each bird, while Sheila does the “dispatching” – she stuns each bird to ensure they don’t go into the scalding tank live. 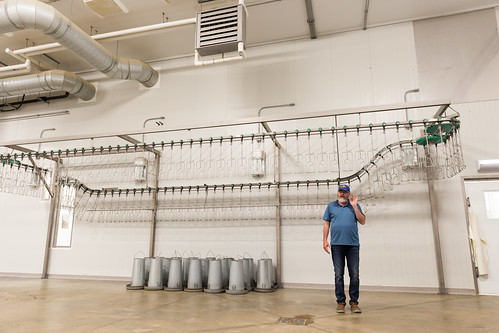 They are supported by a team of people who help with the cutting, packaging, and processing of the value-added products. They don’t use liquid smoke or heavy cures for their sausages and deli meats, and Ron shared that his current favourite product is their turkey ham. 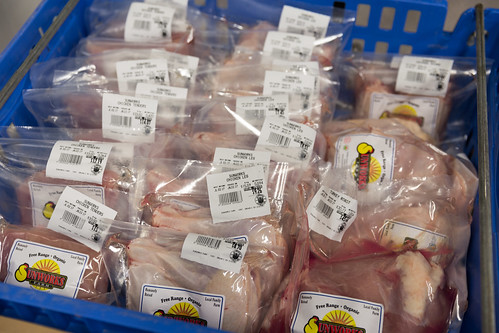 To end our visit, we were treated to a five-course dinner featuring various Sunworks meats, prepared by Chef Kevin Zellweger of the Quarter Section Food Company. They run a catering operation and is in the process of opening a bakery in Leduc.

We nibbled on a delicious assortment of Sunworks charcuterie, Sylvan Star cheese and freshly baked bread before moving on to a salad spiked with some of the tastiest crumbled bacon I’ve had in some time (from Sunworks, of course). 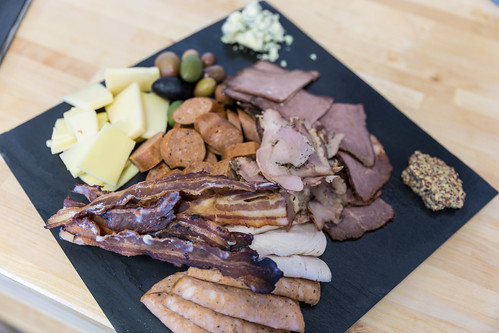 Chef Zellweger also prepared chicken leg confit atop asparagus and mushroom risotto, but the resounding favourite was the beef wellington – medium rare and gluten-free to boot. 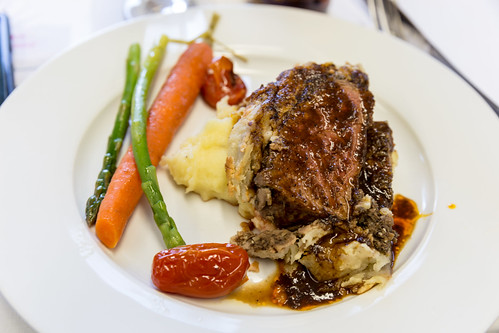 We had also spied the triple chocolate mousse when in the cooler earlier on in the tour, but it was even more appealing plated, served with flecks of edible silver. 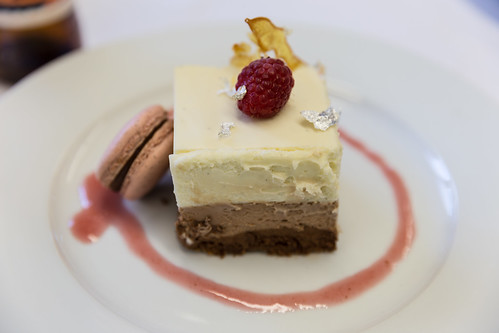 If Ron and Sheila’s generosity wasn’t enough already, it extended into a parting gift containing several packs of sausage to take home (including Mack’s favourite – chicken garlic and rosemary sausages).

Thanks again to Ron, Sheila, and Issac for hosting us, and to Jacquie for organizing this opportunity! Sunworks will likely open their doors for a family-friendly public tour in September, so keep your eyes on their Facebook page for details.