In mid-May, the Art Gallery of Alberta announced an initiative called “all access evenings”, offering free admission to the gallery between 5-8pm every Tuesday and Wednesday night. This replaces their previous promotion of once monthly free admission evenings; museum officials hope this will encourage even more people to take advantage of the cultural institution.

In conjunction with this, the gallery’s in-house restaurant, ZINC, has developed a special “tapas Tuesday” menu to entice patrons to include a meal along with their visit. All of the items are priced under $20, and though most dishes can be found on their regular lunch or dinner menus, a half dozen dishes are exclusive to Tuesday evenings.

In early July, I met up with Mack after work on a Tuesday night for a bite to eat and a walk through the gallery. Signage signifying the dinner deals would be helpful to their cause, either outside the restaurant or at the gallery desk; the menu wasn’t visible until it was presented to us at the table. 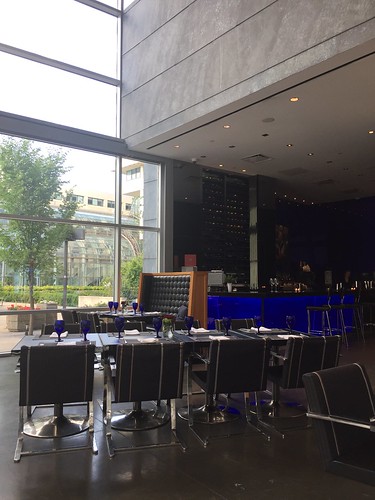 Linda wasn’t a huge fan of the mac, but we both enjoyed how creamy it was – it’s a quality many other local versions surprisingly lack. This incarnation featured lots of bacon, mushrooms, and kale, and left us satisfied. 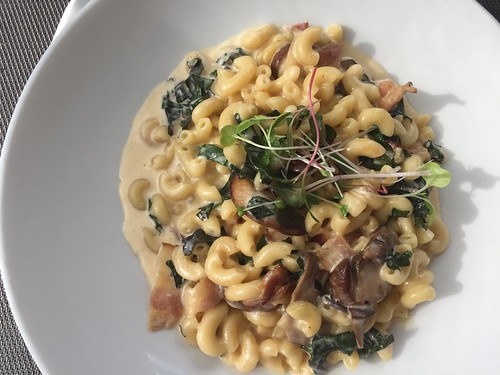 I ultimately ordered the prawns because my favourite dish at ZINC remains their prawns over risotto, and this didn’t disappoint. The prawns were well prepared (as always), and we liked the punchy flavours of the accompanying tomato ginger chutney. 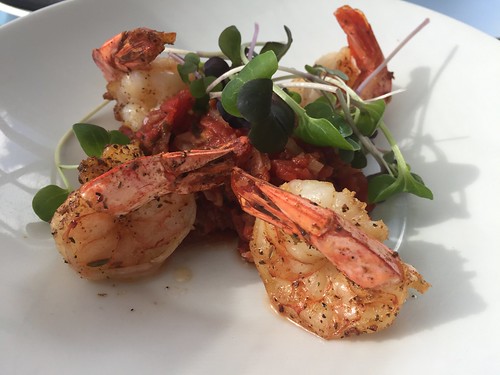 We expected slider sized pulled pork sandwiches, but instead, were each presented with a full-sized burger. Mack loved the soft, pliable pretzel bun, and we both commented on the generous portion of pork. It’s notable that the locally-sourced Bear and the Flower Farm pork is not doused in sauce so it can stand on its own, though it was paired with cabbage for texture. Chef David Omar confirmed that they are taking a loss on this dish with the hopes that it will bring diners in. 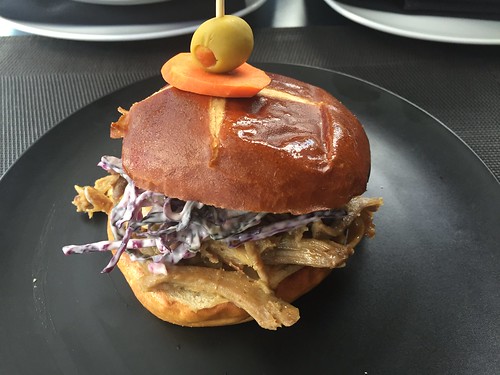 During our stay, there were only four other tables occupied. While ZINC is a beautiful space, with its vaulted ceilings and grand windows overlooking City Hall, the atmosphere may be too formal for more casual diners seeking to share a few small plates. If ZINC is serious about attracting a different crowd, could they consider carving up the dining room to include a few communal tables or feature some less conventional seating? Or (recognizing that this is easier said than done), set up some makeshift seats in the foyer just outside of ZINC, and perhaps reduce the menu offered in this space to just a handful of items (potato skins, pulled pork, sausage, a feature cocktail and beer)? It’d help make ZINC much more approachable, which seems to be one of the motivations behind the idea of “tapas Tuesdays”.

At any rate, we did enjoy our night out – we walked off our meal with a spin through the gallery (in time for Canada 150, most of the current exhibits feature Canadiana, including my favourite of the bunch, Gretzky is Everywhere). Hopefully this promotion does encourage more Edmontonians to consider visiting the gallery – and to take a chance on the restaurant as well.