I’ve wanted to be more intentional with exploring the areas just outside of Edmonton, so at the end of April, Mack and I planned an overnight excursion just south of our city.

Last year on our way to Calgary, we stopped over in Lacombe. They had a charming Main Street lined with well preserved historic buildings, and we stretched our legs in a few of the small shops after lunch at Cilantro and Chive. We didn’t have time to hit up all of the notable businesses, so we made a note to return.

Sweet Capone’s has received some press for selling out of their specialty cannolis on a daily basis. A few months ago, they moved into a larger space just a half block down from their original location on Main Street. 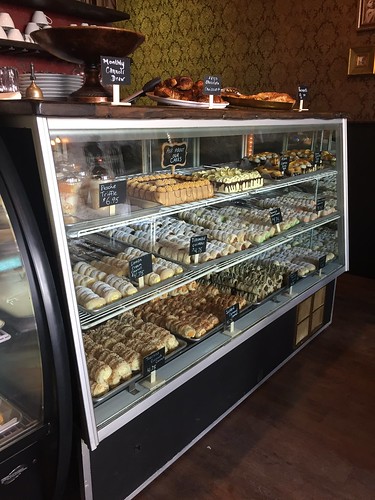 On this trip, we were finally able to give them a try ourselves. The pastry was lightly dusted and perfectly flaky, and we preferred the vanilla to the artificial-tasting lemon cream.

Blindman Brewing has been helping to raise the profile of Lacombe through its craft beer. Located in an industrial area of the town, Blindman offers a lively, comfortable taproom where visitors can sample their various brews.

At least on that day, most of the patrons appeared to be regulars, treating the taproom as a place to meet up with friends for a pint. In addition, Blindman offers on-site sales, so many folks ducked in for growler refills or to pick up a case or two of beer. 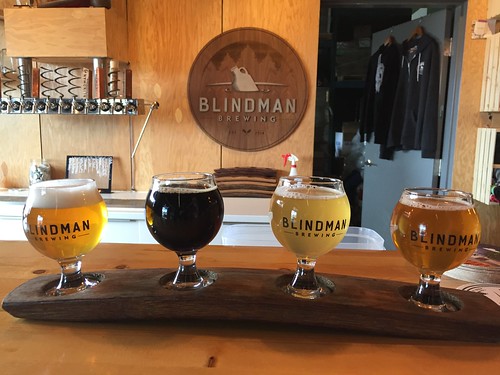 Flight of beer at Blindman Brewing

We were both surprised at just how many varieties Blindman produces. On that day they had nearly a dozen varieties, most of which we hadn’t seen before. Of the types we tried that day, Mack’s favourite was the New England Pale Ale, while I preferred the light, inoffensive Saison Lacombe Printemps (I’m not much of a beer drinker most days).

Next door to Blindman sits Old Prairie Sentinel Distillery. In operation since January, they’ve been overwhelmed with demand.

At present, they offer four varieties of vodka and gin, with their most unique product being the Pickled Pepper Vodka, which was made to be mixed with Clamato for a quick but flavourful Caesar. They hope to add rye and rum to their roster soon, in addition to a gin for "juniper heads". Most of their bottles are being distributed in Lacombe and the surrounding communities, but there are plans for wider distribution – Eau Claire was mentioned as the model small distilleries hope to emulate. 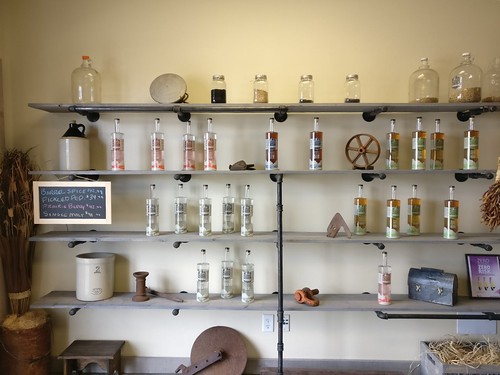 Although Old Prairie Sentinel doesn’t yet have a tasting room (it’s in the works), the few minutes we spent in there with Rob Gugin were enlightening. His passion for spirits is contagious; we’ll definitely be back when the tasting room is in place.

Before leaving Lacombe, we stopped by Elizabeth Lake just before the rain came.

It’s a small lake adjacent to a university and a residential area, so it’s not really worth seeking out, but I liked seeing the exercise equipment integrated along the natural paths. 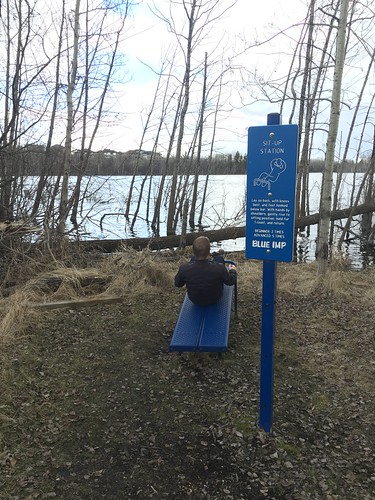 Mack humoured me at the sit-up station

They’re apparatuses we’ve seen in Toronto and Ho Chi Minh as well – it would be great if Edmonton would consider them for some of our park spaces, too.

On our way towards Pigeon Lake, our resting place for the evening, we detoured to a couple of farms.

Pik-N-Pack is made up of three member greenhouses in the Lacombe area that Edmonton farmers’ markets consumers would be very familiar with: Doef’s, S4 Greenhouses, and Gull Valley Greenhouses. They process, package, and market their products under the Pik-N-Pack label for wholesale purposes (you can also find these at Save On Foods, among other grocery stores). 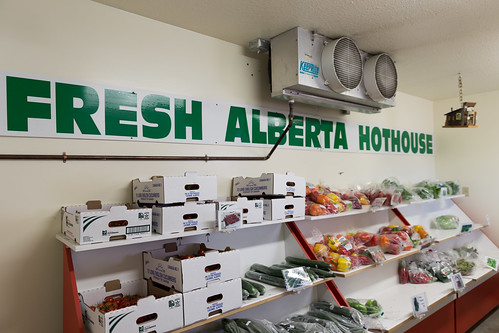 However, Pik-N-Pak’s warehouse also operates an honour-based self-serve store, open daylight hours Monday to Saturday. It’s amazing to me that stores like this still exist, but based on a sign posted on the door of the store, it’s likely they’ve experienced some issues with theft. 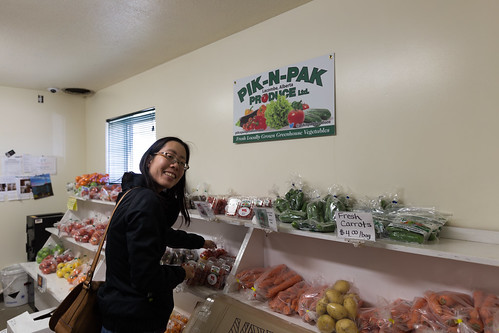 Picking out some goods!

We picked up some tomatoes, peppers, and potatoes for the road home, but they also had cucumbers, eggplant, hot peppers, and carrots on hand.

Near Pik-N-Pack is the family-run farm Brown Eggs and Lamb. They also have an honour-system store for their eggs.

In addition, the on-farm store has a good selection of meat proteins, dairy products, and value-added products produced in Central Alberta. We bought a jar of Red Deer made Chai Wallahs honey, creamed honey enhanced with a blend of spices so consumers can easily produce a cup of chai at home. 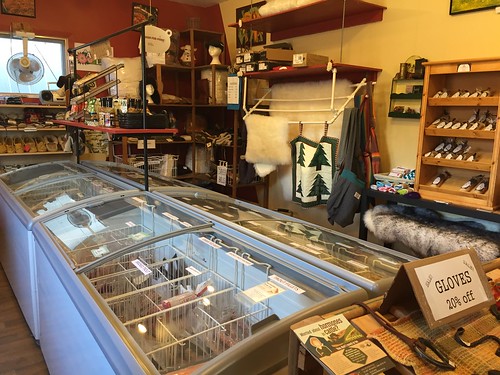 Brown Eggs and Lamb is actually hosting a customer appreciation day in July, so if you’re hoping to explore more of the farm (as Sharman did last year), make sure to mark your calendar for a road trip!

I’ve been very fortunate to have been a part of a few off-season work retreats to the Village at Pigeon Lake over the years. It’s only an hour away from the city, but the pace of life seems much more relaxed. Mack and I stayed at the Village Creek Country Inn, a basic but well-kept hotel. I particularly appreciate that the hotel is adjacent to several other amenities in the "village", including restaurants, a grocery store, gift shop, and clothing boutique. 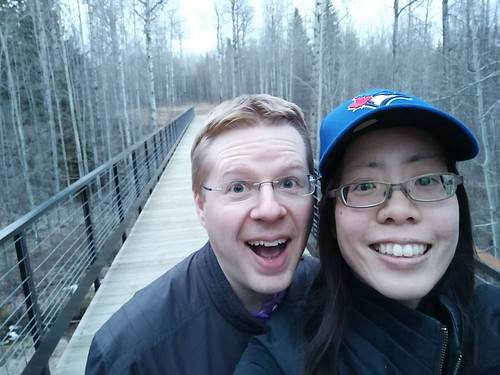 Happy to be back in the village

We ended up at Chef N’ Pigeon Lake that night, as the more well-known Eco Café was closed for a tasting event. I didn’t mind, as our experience at those work retreats with the catering from Chef N has been very positive. Their "uptown country" menu in the restaurant was more extensive than I expected, ranging from burgers and steaks to chicken and dumplings and steamed mussels.

I ordered the hot turkey, a fun take on turkey dinner: pulled turkey overtop a stuffing waffle, doused with gravy and coleslaw and a side of cranberry sauce. My only complaint was that the coleslaw should have been served on the side, but otherwise, I enjoyed the diner-style comfort food. 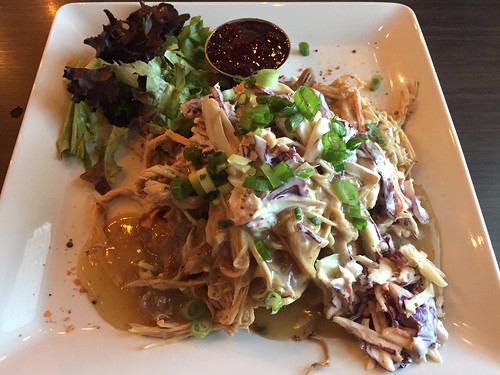 Mack went ahead with the 8oz signature farmer burger, with sauteed mushrooms, Sylvan Star gouda, house-made bacon, crispy potato hay and garlic mayo. The patty was impressively juicy and flavourful, and though it was definitely a five-napkin burger, he said it was worth the mess. 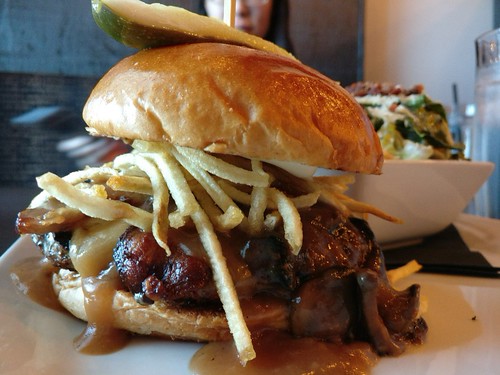 The only hot breakfast option in the village, we stopped at Daisy McBeans the next day. Their homestyle breakfast menu isn’t extensive, but features all of the classics you would expect. 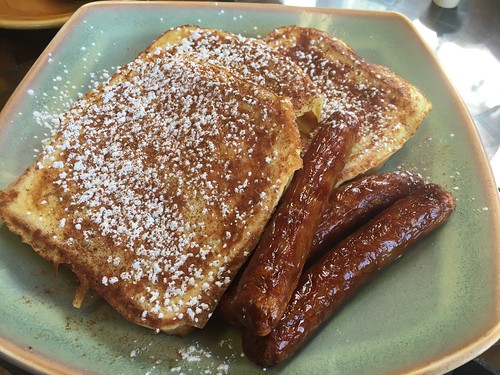 Portions were large – I barely finished my French toast and sausage, but it is the kind of place you can linger all morning without worry.

We eventually made our way to Pigeon Lake Provincial Park, comprised of day use areas and camp sites. 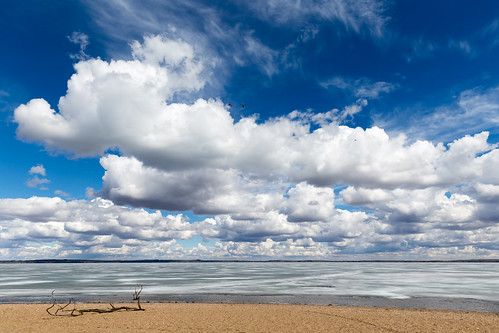 Pigeon Lake in the spring

The weather was spotty (rain clouds soon rolled in), explaining the likely reason of why the trails were so quiet, but I did appreciate having most of the area to ourselves that day. 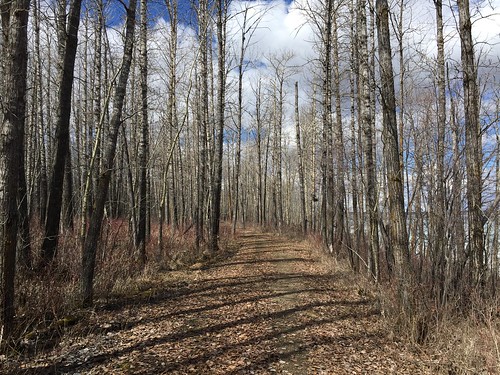 The trails connected us to the yurt options now available at Pigeon Lake, described as "comfort camping" by Alberta Parks (also more commonly known as "glamping" – glamour camping). They do provide convenience – beds, a fridge, and of course, ready-made shelter, but the price per night ranges from $120-165 per night – a little steeper than I would have expected. 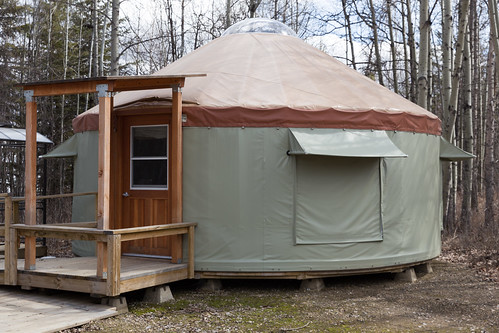 We ended up taking the backroads to Edmonton, which, in addition to encountering less traffic, meant the potential for more photogenic scenes like this one. 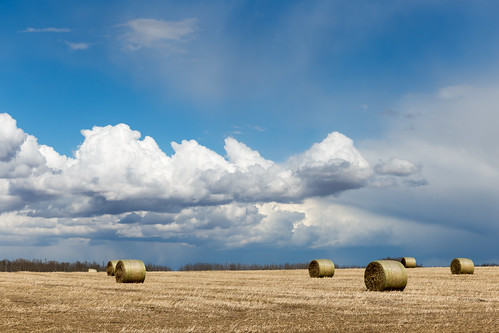 While many may overlook Lacombe and Pigeon Lake in favour of the mountains, they’re worth considering for those who are time-conscious, or just looking to further explore their backyard.

6 thoughts on “Exploring Our Backyard: Lacombe and Pigeon Lake”