It was kismet for the 2017 season of Eats on 118 food tours to start at the end of April. My office just relocated to 118 Avenue this week, so I thought the tour would be a great way to acquaint (or reacquaint) myself with some of the eateries I’ll be frequenting more.

Wild Heart Collective (the same folks behind the 124 Grand Market, among other placemaking events) was brought in by the Alberta Avenue Business Association to run a pilot of food tours in September 2016. The four tours in four weeks were so successful that they decided to continue in 2017. It appears to be a good decision so far; the first tour of the season was so popular Wild Heart had to open up a second seating to accommodate those interested. 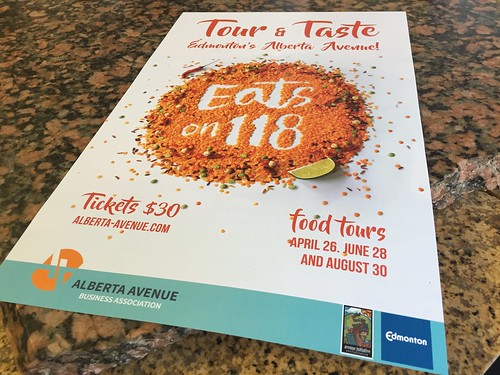 As with most food tours, the hope for participating restaurants is that patrons will return on their own after the guided introduction. Happily, Business Association Executive Director Joachim Holtz shared that many of the restaurants that participated last fall did notice an uptick in traffic following the tours.

On this tour, the $40 ticket would include tastes at three restaurants that we would reach by foot. As I mentioned in a recent post however, the value for organized tours is not found in the food alone, but in the information or access provided by the guide. In some ways, the buy-in from the Business Association (and the connections they can bring) has resulted in a solid foundation for Eats on 118; all three restaurants were enthusiastic and well prepared for their showcase.

Mack and I joined about two dozen others for the first seating on Wednesday evening. Kirsta Franke was our tour guide. 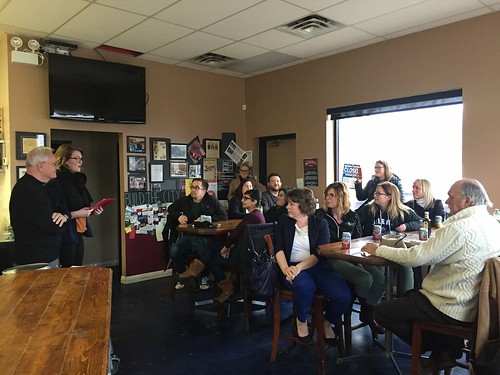 A welcome from Kirsta and Joachim

We began at Battista’s Calzones, an Alberta Avenue gem. Battista Vecchio has been in business for six years, and his handmade calzones have been featured on Food Network’s You Gotta Eat Here. But you have to visit in person to understand why Battista’s Calzones is worth seeking out. Hot out of the oven, the dough is soft and yielding, encasing savoury combinations ranging from all-beef meatloaf (my favourite) to prosciutto, artichokes and truffle oil (Battista’s favourite). 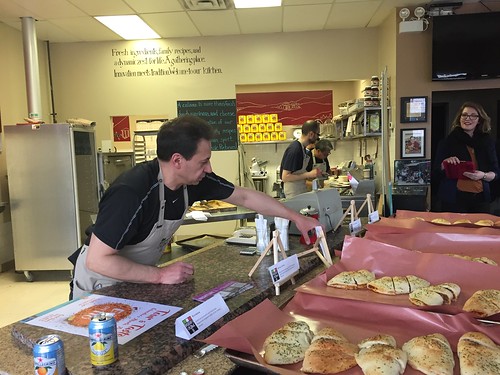 That night, everyone had the chance to sample two calzone flavours. Though I could have easily finished a whole calzone, it was probably wise of the organizers to limit this appetizer to only part of a calzone so we’d be able to pace ourselves for the other establishments.

Our second stop was on the next block at T & D Noodle House. A family-run restaurant open for more than two years, T & D is named after its proprietors Thien and Diep. Their daughter Laura (who also happens to serve on the Business Association Board of Directors) offered us a warm welcome. She served up one of their most popular dishes – chicken, beef, and spring roll combination plate. 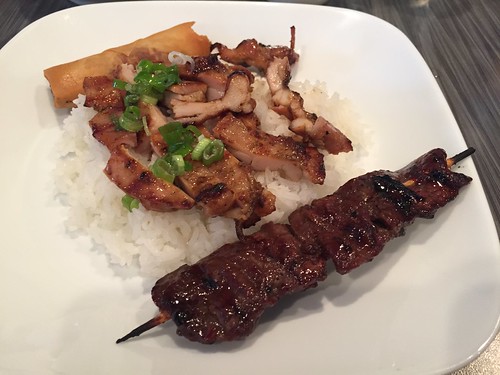 Everything was well-prepared, but I was really hoping for a sample of their pho. One of the things I’m still mourning with our office move is not being within walking distance of Chinatown’s Pho Tau Bay any longer (my go-to for quick lunches), so I’ll be back to T & D to see if they’ll work out as an adequate stand-in.

Our final visit was another neighbourhood favourite – El Rancho. Open for thirteen years, El Rancho has been a part of the Avenue’s revitalization efforts. Last year, restaurant owner Dora Arevalo founded a street festival that celebrated Latin food, dancing and music; expect the event to return again this July.

Although Dora was away in El Salvador last night, her hospitable staff ensured we were well-fed and happy. Each table was provided with a platter of chorizo, beef, and chicken tacos to share. Although we’ve been to El Rancho many times, we typically stick with their pupusas and flautas, so it was great to be reminded of their other menu options. The chicken tacos were by far our favourite. 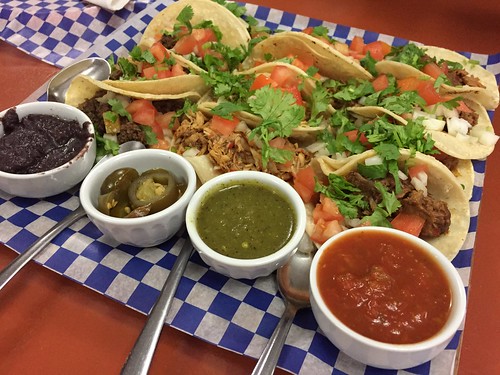 Mack and I agreed we were served just enough food to be comfortably full – any more and we would have had to bag leftovers!

It sounds like the Business Association recognizes the assets they have in the neighbourhood, and have found a good way to highlight them. I hope these initiatives do encourage ongoing return visits to an area that is often overlooked.

Thanks to Wild Heart and the Alberta Avenue Business Association for organizing a fun evening! If you missed it, there are two additional tours to come on June 28 and August 30, 2017 – tickets are now available, and are likely to sell out fast.