It’s been a while since Mack and I have made the effort to visit a new restaurant in its first week of operations, but in early March, Grandin Fish and Chips fit the bill when we didn’t want to wander too far for some fried delights.

Fish and chips-focused joints aren’t new to Edmonton: Joey’s, Back Home, Sir Winston’s, and Brit’s are familiar, and for some, institutional. But Grandin Fish and Chips is a modern addition to the scene, and dares to offer fresh seafood on its menu.

Sister restaurant and block neighbour The Common adopted a patio to enhance the busy vehicular traffic corridor, while Grandin Fish and Chips features full, unvarnished windows that allow passerby visual access into the space. There’s nothing more beckoning on a cold evening than seeing a warmly-lit, bustling dining room from the outside. 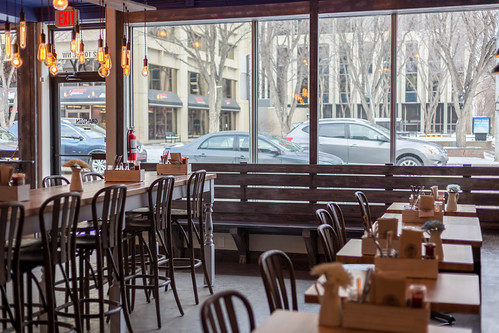 When we stopped in that Saturday afternoon around 4pm, we were the only patrons in the restaurant (business soon picked up with the early dinner crowd). We had ample time to marvel at the tasteful and minimalist décor, including the fantastical white and navy wallpaper, wood furniture, Edison bulbs, and a "living" wall designated for customer photos. The soundtrack was light and fun, and mixed upbeat classics from The Beach Boys and the Monkees, among others. 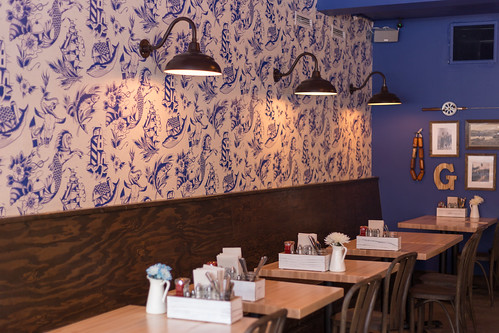 We kept our order simple that day – cod and chips ($16 for one piece) for each of us would provide a good representation of their primary offering. While we didn’t sample their other items such as fresh oysters, seafood chowder and salad Nicoise, a few of my fellow bloggers have done so with mostly positive reviews. Grandin sources their seafood from Sysco-owned Fin’s and Effing Seafoods, and prides itself on serving fresh products.

We were on the tail end of order at the counter lunch service (table service begins at 5pm). Our food arrived pretty quickly, served on aluminum pie plates and disposable liners printed with the wallpaper design – a straightforward and elegant presentation. 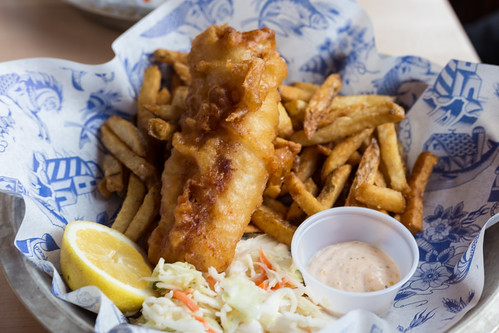 The cod was nicely prepared, with a well-seasoned batter that actually adhered to the fish. The accompanying tartar sauce had a nice punch of acidity, and the coleslaw was dressed with a light hand. But we couldn’t stop raving about the crispy and addictive chips; for that reason, Grandin is perhaps too dangerously close to us.

Of course, the cost at Grandin is a consideration – the same price for a one piece meal might garner you two pieces at one of the old standbys. Still, there’s something to be said for quality and a refreshed, modern take on fish and chips. We’ll be back.