Running from March 10-19, 2017 this year, Downtown Dining Week remains the last event offering prix fixe (fixed price) menus in Edmonton. Given the number of restaurants that have opened Downtown over the last few months, it’s a great way to test them out with a lower overhead cost.

I took advantage of the two new additions to the roster – Atlas Steak + Fish (in the Grand Villa Casino) and Crash Lobby Bar (in the renovated Grand Hotel, now known as Crash Hotel). They were both offering deals too good to pass up.

First up, I met up with Linda for lunch on Friday at Atlas. The casino was quiet at noon, but it was obvious the word was out about the Downtown Dining Week specials as the restaurant was half full. Our server was clearly a bit panicked – he was being run off his feet as he shared that they weren’t expecting it to be as busy as it was. I understand that it may be difficult for new Downtown Dining Week participants to predict the potential uptake in business, but given this is likely the introduction for many to the business, I wonder why restaurants would risk leaving a poor first impression.

At any rate, Linda and I were excited about the $15 two-course lunch, particularly because it was our first time at the restaurant. Atlas has the gleam of a modern day steakhouse – the leather and wood banquets that you would expect, but reflective ceiling accents and statement light fixtures that you wouldn’t. I also appreciated that there was a generous amount of space between the tables – something that is becoming more rare with most new establishments. 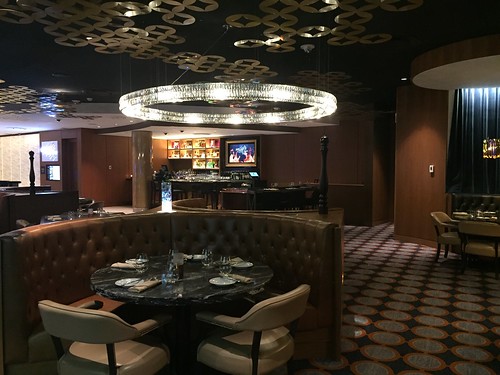 The bread course we started with was noteworthy – there are few things more comforting than warm bread. Atlas serves their house-made dinner rolls warm in cast iron pans, brushed with blue cheese butter and sprinkled with coarse salt. Thankfully for me (not a blue cheese fan), the flavour wasn’t so pronounced, and I was able to enjoy them. 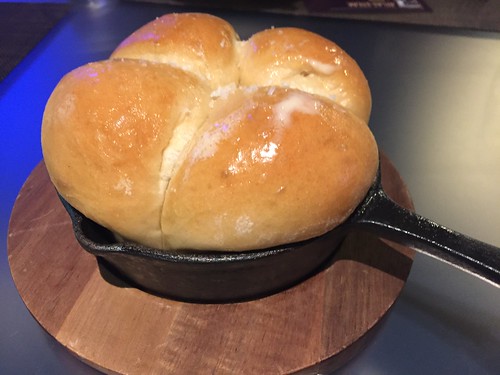 Linda selected the salad appetizer – the house salad with mixed greens, daikon, beets, carrots, almonds, goat cheese, and white balsamic dressing. It was certainly an aesthetically pleasing plate, but Linda was hoping for more substantial beet flavour, instead of beet curls as a garnish. I ordered the squash soup with spiced oat crumble and cherry balsamic. The squash had been smoked in their special Josper oven (what they use to prepare all of their steaks), and the smoky flavour was definitely notable. It was a very smooth puree, but I did appreciate the added texture from the crumble. 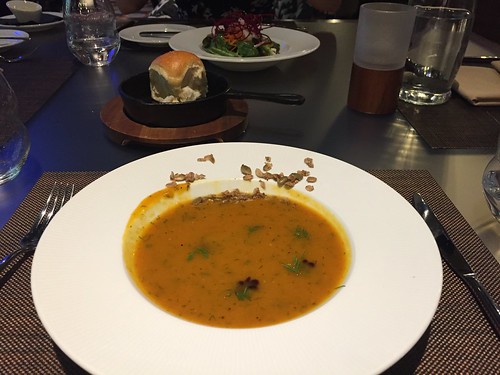 For mains, Linda was swayed by the off-menu prime rib special. I found it to be a tad too fatty for my taste, but she didn’t mind it as much. I opted for the spaghetti carbonara with Josper smoked pork belly, garlic, parsley crumbs, grana padano, and poached egg. The egg was perfectly soft poached (and beautiful in presentation), but as I typically prefer my carbonara creamier, I would have chosen a more traditional preparation of coating the pasta with the egg. 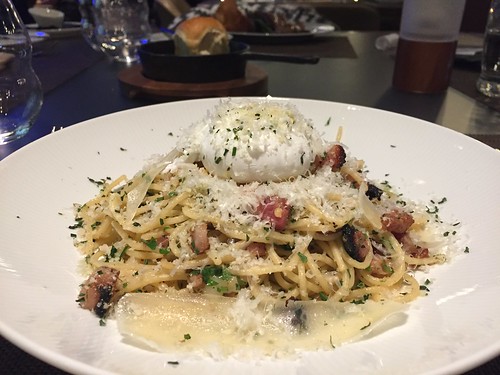 Service was spotty; we had to flag down the server on multiple occasions – for a soup spoon, for the bill, to pack up leftovers. Again, I think he did his best in the understaffed circumstances. Based on the food alone, I’d consider returning, but I would hope for better service on future occasions.

Downtown’s former Grand Hotel has been undergoing full-scale renovations over the past few years. First came Denizen Hall, which opened in the hotel at the end of 2014, offering relaxed pub fare alongside restored retro arcade games. Then, Crash Hotel, with its initial phase of 25 rooms and refurbished lobby tavern, followed suit two years later. Urban Sparq Hospitality (who also run Knoxville Tavern, The Pint and Beercade) operates both Denizen Hall and the Lobby Bar, but has wisely chosen to distinguish them in feel and food. While Nate Box (of Elm Cafe) had been asked to create the menu at Denizen, Nathin Bye (formerly of Wildflower Grill and Ampersand 27) was brought in for Lobby Bar.

The space of the Lobby Bar (which shares the same entryway as the the hotel front desk) definitely resembles its sister restaurant, with identical wood paneling, leather banquets, and some of the same furniture. However, it is brighter, smaller in size and more open, with a reflective tin ceiling and a focus-pulling bar. And though two screens were tuned to the Oilers broadcast during our visit, the sound was muted in favour of a pop/dance soundtrack. 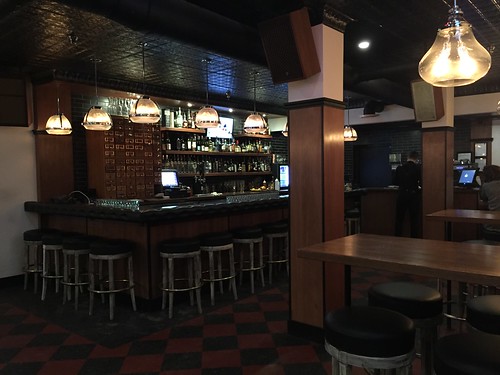 Mack and I stopped by on Sunday night to take advantage of the $28 three-course offering. Two of the three dishes could be selected from their regular menu, so it was a great way to sample several of their dishes in one shot.

As mentioned, the menu is quite a bit different than the comfort food-oriented fare found at Denizen Hall. The dishes at Crash Lobby Bar are more refined, less likely to require a deep fryer, and follow the trend of small plates meant to be shared. We did so with our four dishes.

The pork n’ beans was not something I would have expected to find here – sweet and sour honey scented shoulder, served alongside a trio of beans and kale. Everything was well prepared, and the pork was nicely flavoured. 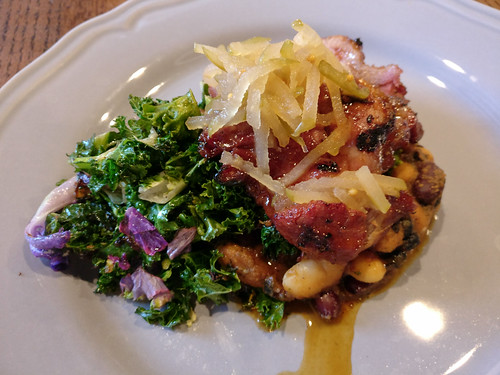 The meatballs, a mixture of beef and pork, looked promising, were unfortunately on the dry side, even when doused in the tomato sauce bath. 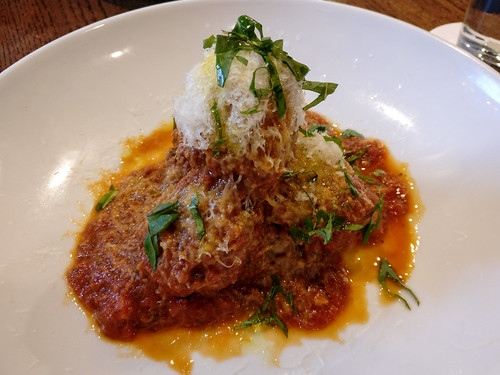 My favourite dish of the evening was the Crash take on beef and broccoli, with a 72 hour braised Alberta beef short rib. I loved the subtly sweet glaze, and the meat was perfectly tender and moist. The smoky, crispy house-made hickory sticks sealed the deal for me. 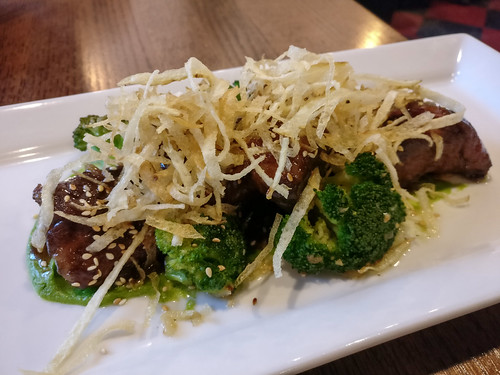 Mack’s favourite was the Crash burger, topped with aged cheddar, braised short rib, and a perfectly cooked sunny side up egg – it may have been messy but it was worth it. He also appreciated the deep fried pickle on the side. 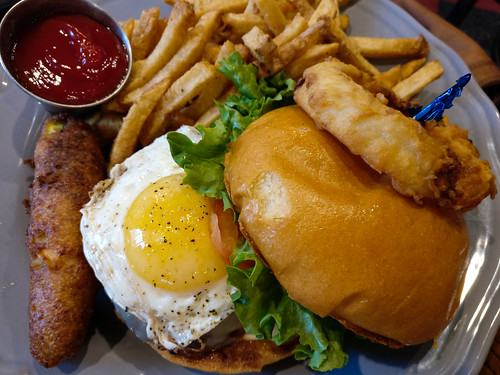 Our third course was the dessert of the day, a cookies and cream cheesecake with a house-made berry compote. It was rich and satisfied our sweet tooth, but in some ways felt like an afterthought when compared with the previous courses. 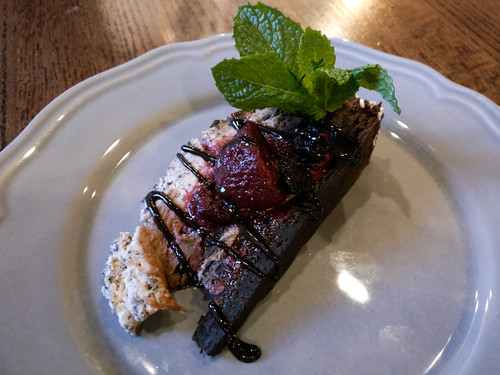 Service was good – the space was only about half full, but we were well taken care of. I certainly had a better overall experience at Crash Lobby Bar than at Atlas, and wouldn’t hesitate to return again.