Edmonton’s second no tipping restaurant just opened quietly in the west end with much less fanfare than the first. When Café Linnea launched this summer, there was much buzz about the imported concept of building gratuity into their prices, with an end goal of providing servers with more predictable wages. In some ways, the adoption of this philosophy is even more revolutionary with Grain of Rice, given Asian restaurants are stereotypically known for extremely competitive pricing, sometimes to their detriment. Mack and I stopped by this past weekend while running errands in the area.

Located on the far west end (in the same complex as the Save On Foods on 215 Street; GPS failed us by several blocks), Grain of Rice is operated by the Phung family. Son Tony Phung decided to help his parents rebuild years after their restaurant was destroyed by fire, but instead of recreating exactly what was lost, introduced some ideas to help make their business distinct.

The menu was trimmed from hundreds of items to a much more manageable size of a dozen or so dishes, with rotating specials to keep things interesting for regulars. Grain of Rice also sources meat from local producers, which, coupled with their no tipping policy, accounts for their higher prices. While some diners will undoubtedly balk at the idea of paying more for similar style dishes in other parts of the city, I think it’s reasonable if higher quality plates and good service are delivered in return.

Grain of Rice occupies the end bay of the strip, the interior benefiting from access to lots of natural light. The dining room is clean and minimalist, with the vibe of a fast casual restaurant. I liked being able to see into the kitchen as well, which seems to continue the restaurant’s theme of transparency. 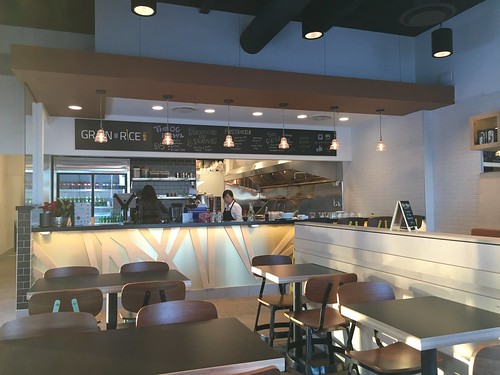 The menu features many popular Vietnamese and Chinese dishes, including vermicelli bowls, peaches and shrimp, and wor wonton soup. Mack decided on the classic beef and rice noodles ($17), while I had to try their pho ($15).

Food arrived in good time, steaming hot. Mack was impressed by the portion size of his plate, and noted that they did not skimp on the beef. I would have liked to taste more smokiness in the noodles, but overall Mack enjoyed the dish. 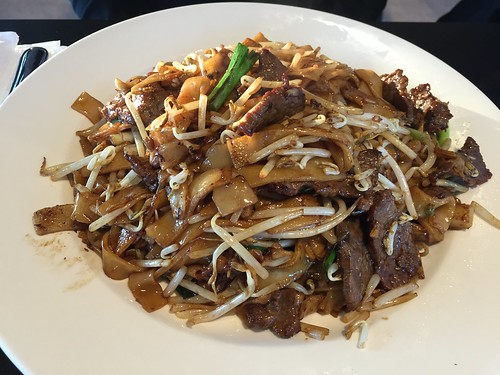 The pho, on the other hand, could have used more meat (and personal preference, cilantro!). The rare beef was pretty tender, and the meatballs were tasty, but I very quickly ended up with a bowl with broth alone. And though Pho Tau Bay will also reign supreme in the broth department for me, the aromatics in the soup was notable. 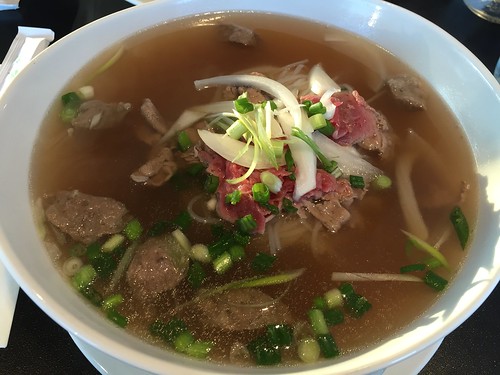 Grain of Rice is still in their "soft opening" phase, so I imagine tweaks will continue to be made in these next few weeks. But I really support the philosophy behind the restaurant, so I wish them all the best.