This is the third post about our trip to BC back in October. You can read about our Kelowna and Penticton highlights as well.

While we didn’t stay in Oliver (we chose to overnight in Osoyoos instead), we ended up spending some time there at some key attractions.

Our Penticton bed and breakfast hosts convinced us that the Festival of the Grape was worth attending, and since it fit in with our plans to head south, we built it into our itinerary. 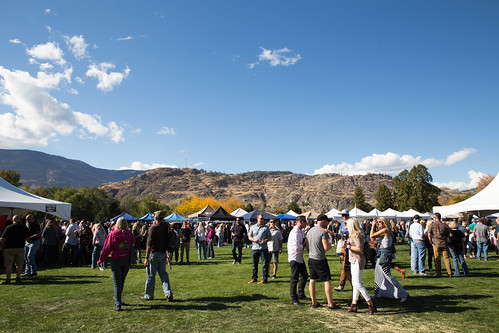 Located in Oliver, the "wine capital of Canada", the festival was celebrating their 20th year. 60 wineries from the area were represented, in addition to a number of food vendors. It was an efficient way to sample from new wineries (favourites that day included Pipe Dream gamay and Kismet pinot grigio) in a beautiful setting. I also couldn’t resist the sparkling apple wine from meadery Meadow Vista. 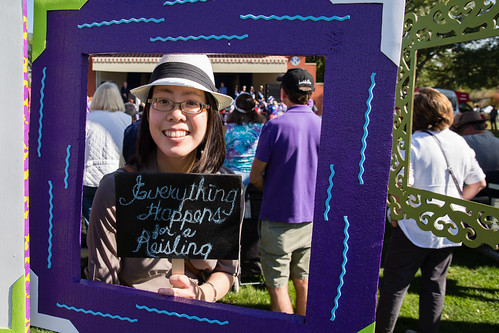 The grape stomping competition was also a lot of fun, with lively competitors that had travelled from as far as Saskatchewan to compete. 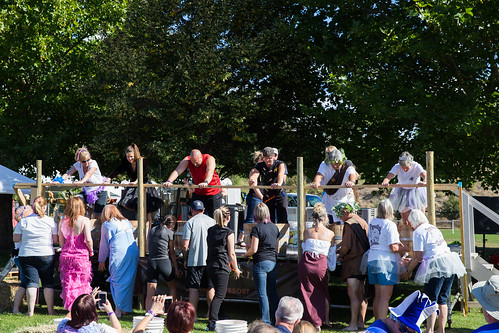 It’s doubtful we would have ever come across one of Oliver’s few food trucks without Jennifer’s handy guide. We managed to get to Hammer’s House of Hog, parked at Lions Park in Oliver, on his last day of his season. 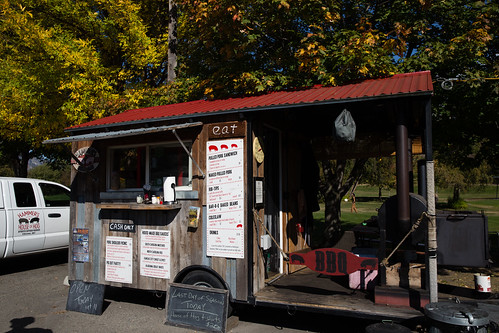 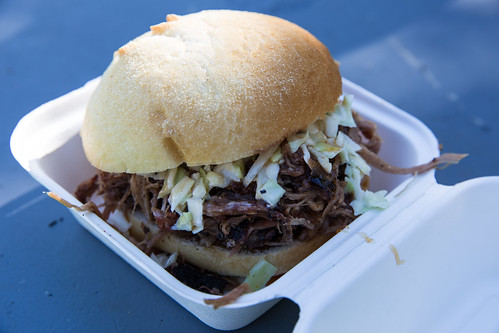 Looking for a more physical activity, we chose to hike up to McIntyre Bluff, a fairly recognizable South Okanagan landmark and a sacred place for the area’s Indigenous peoples. 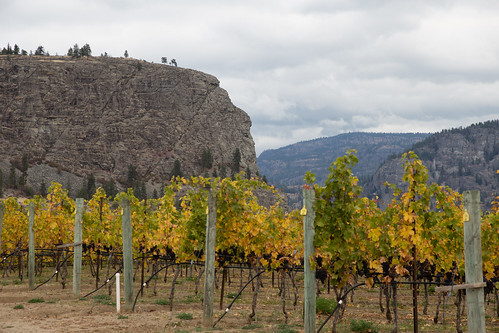 View of McIntyre Bluff from Covert Farm (can you spot the “face” of the rock?)

Being the inexperienced hikers that we are, it took us close to 4 hours to complete the 10km round trip. While the trail itself was clearly marked, distance markers would have been great so we could better pace ourselves. 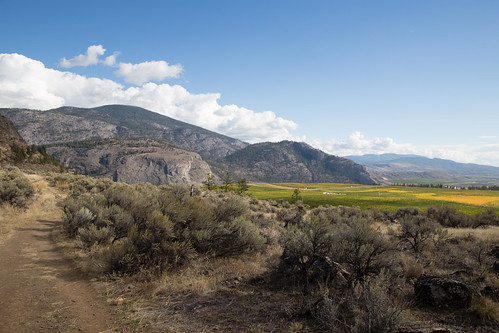 The trail itself traversed some varied terrain, from rock faces painted a dazzling red from the sagebrush to mossy, shaded meadows layered with pine needles to barren, dry desert. 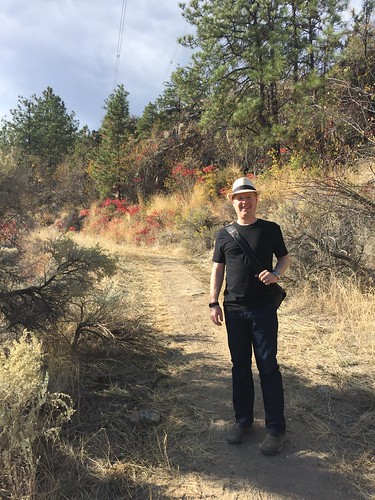 The payoff was better than we expected, offering sweeping views of Oliver and the adjacent Okanagan river. We were also able to see Covert Farms, located at the base of the bluff from above (we chose to tour the farm separately the day after). 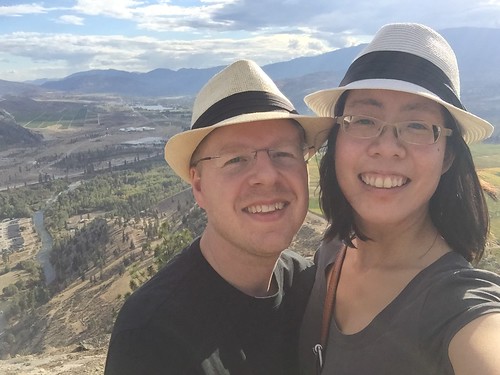 We decided not to do a multi-winery tour during our trip, and instead chose a few wineries we would visit and tour in a more in-depth way. One of these was Covert Farm in Oliver. The tour price is on the high side at $49, but we lucked out and ended up with a private tour. Campbell Kearns was our knowledgeable and passionate guide, and ended up spending two hours with us along the way. 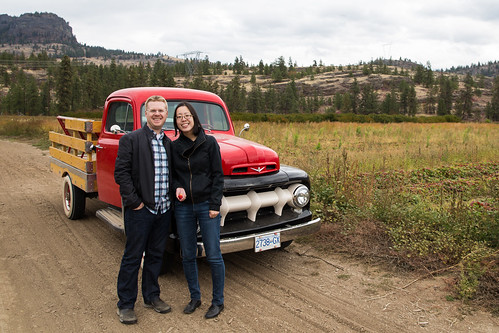 We had fun riding in the beautifully restored truck

Covert combines a number of agri-tourism aspects on their 700 acre property, including tours, children’s programs, on-farm dinners, and a u-pick, and will be looking at collaborating with Indigenous communities to develop a forage/hike up to McIntyre Bluff. 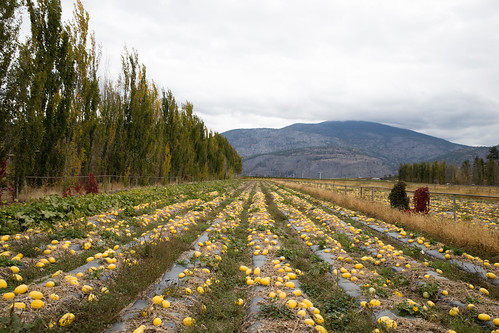 He introduced us to their Scottish Highland cattle, who are actually protected by a small herd of alpacas (we didn’t know they had been domesticated for this purpose). The manure is helpful for fertilizer, since Covert is a certified organic operation. We also visited the small u-pick area of the property, featuring a small orchard, tomatoes, and strawberry patch. Campbell told us the strawberry variety actually bears fruit twice a year, and they’ve been able to pick strawberries as late as December. 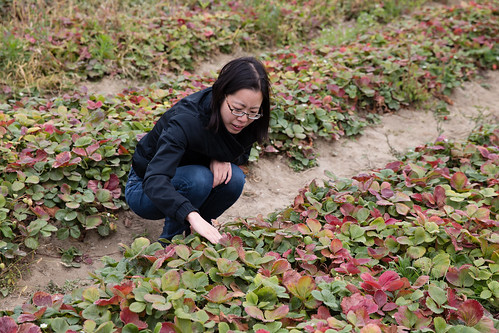 They had to drag me away from the strawberry patch

We spent the bulk of the tour learning about the organic practices they employ on their 25 acres of vines. To mitigate weeds, they plant competing crops such as vetch, which also have the added benefit of fixing nitrogen in the soil. To dissuade birds from feasting on the fruit, they planted fields of sunflowers (the unintended consequence from this was that it ended up attracting more birds than they’d ever seen before, but it opened up the skies to their predatory friends). Recognizing that they do lease about 300 adjacent acres to Sandhill, which is not certified organic, Campbell was careful to say that Sandhill is expected to be respectful of the land. One of the technologies that Sandhill does employ are propane-powered fans, which automatically kick in when frost is a possibility to sweep the cold draft up and away from the vines. The cost to run a single fan for one evening is $800. 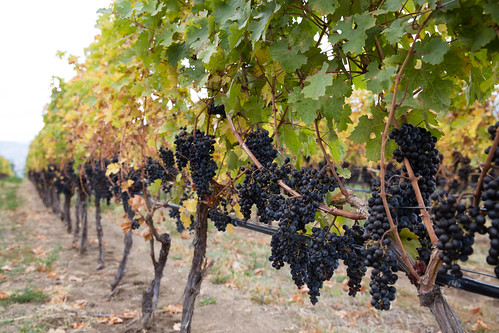 During the tour, we also had the chance to sample some of their wines, though many of their varieties had sold out for the year already. They paired the wines with a lovely cheese and charcuterie board. 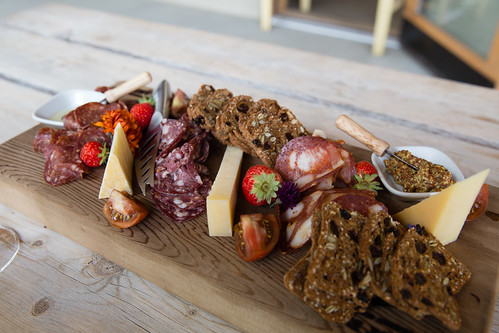 While we chose not to stay in Oliver, we found there were many reasons to linger!