There’s a new full-service food and entertainment option in town! Back in September, Cineplex opened its first Rec Room in South Edmonton Common, the first of many planned for the country. In fact, after a second outlet is completed in Toronto next year, expect a third to follow some time in the summer at West Edmonton Mall (in the former Ed’s space). Though this first location happens to share the same parking lot as its theatre big brother, this may not always be the case, and besides some Scene Card branding on site, the visual connection is subtle.

At 60,000 square feet spread out over two floors, the Rec Room has been created as a destination. With more than 140 amusement games and crowd-pleasing music, it appeals to an adult crowd (like Chuck E Cheese for grown ups), but they’ve taken the concept even further. They have incorporated some nostalgic elements – there’s a small bowling alley upstairs and several retro games like pinball and Pacman. 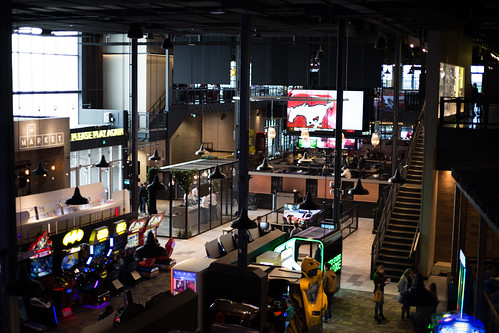 However, they’ve also done their research to stay on top of trends; hence, they also offer axe-throwing and virtual reality (curiously, considering the current market in Edmonton, they don’t feature escape rooms). 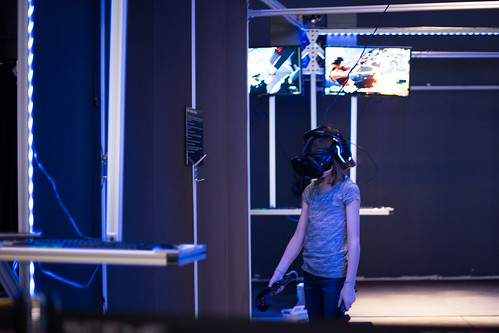 In addition, I was surprised to find out they have a 225 seat auditorium and another stage in the main restaurant where programming is planned 7 days a week – everything from hockey on the big screen to karaoke, trivia nights and comedy shows.

The food at the Rec Room – divided into three distinct “restaurants” – mirrors its philosophy on entertainment. The nostalgia can be found in comfort food classics: a casual food bar called The Shed offers a poutine bar and a “sweet emporium” with gourmet doughnuts that can be injected with liqueur. 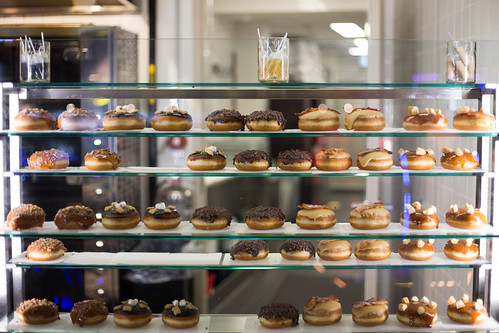 Doughnuts at The Shed

But they also stay on-trend with The Loft and its wood-fired pizzas (wood-fired anything continues to be hot) and the chef-inspired cocktails at the Rec Room’s main restaurant, THREE10 (named for the three territories and ten provinces of Canada). 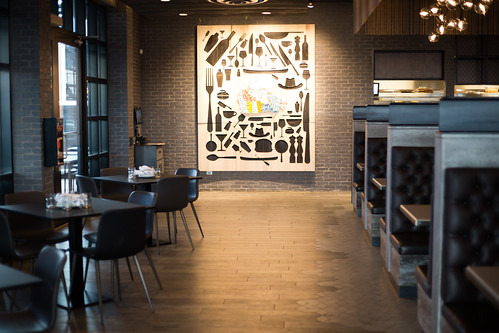 Mack and I were invited by the Rec Room to try the food at THREE10 over the weekend. Arriving for a late lunch on Saturday afternoon, we found the crowds still relatively sparse. By the time we left prior to the dinner hour though, it was starting to fill up. We were told that line-ups are frequent on weekends, and private rooms have been completely booked into the new year. And although minors are permitted as long as accompanied by an adult, based on customer feedback, they are considering adult-only hours.

Mack and I were impressed with THREE10’s beer list – it was nice to see several Alberta beers on offer, including Alley Kat and Yellowhead. On the cocktail front, we were a tad disappointed with our drinks. The restaurant boasted its recognition of seasonality, so it was unfortunate that we were recommended the strawberry basil lemonade – it was an easy drinking vodka-based cocktail, but one that should be retired until warmer times. The “new fashioned” that Mack sampled wasn’t quite as smooth as he was hoping for, with its mace-nutmeg syrup and rootbeer bitters. 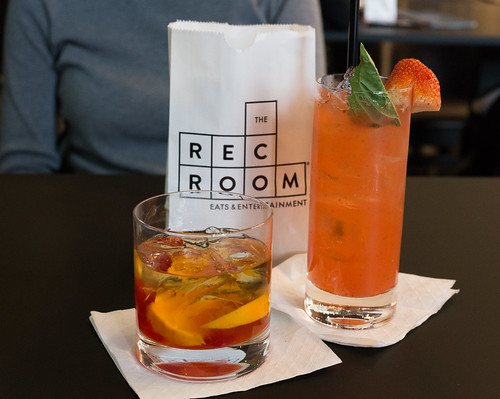 The menu at THREE10 is said to be “inspired by Canada’s vast and varied landscape”, meaning primarily that it strives to appeal to many tastes. It features some conventional plates (steak frites, pork chop, half chicken), but they also have nearly a dozen starters to consider.

The applewood smoked bacon maple jam ($11) was a tasty combination of melted double cream brie and an underlay of smoky, sweet jam. Served with crostini, this was a great shareable appetizer. 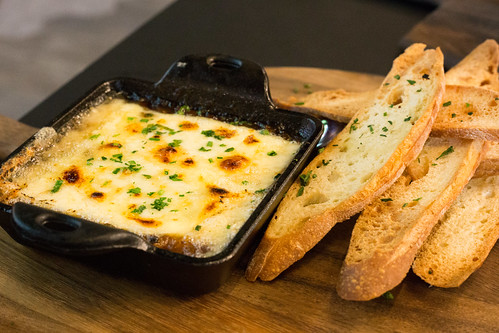 Similarly, the popcorn fried chicken ($13), served with a chipotle BBQ sauce, was really satisfying. The morsels were lightly battered, and paired well with the moderate kick of the sauce. 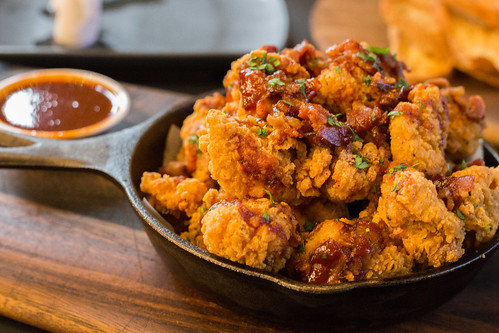 For larger plates, we selected two dishes suggested by their staff. The pickle brined fried chicken ($24) is prepared as described – before being dredged and fried, it is marinated in a pickle juice brine. We didn’t expect the brine to impact the flavour of the meat as much as it did, and unfortunately, it didn’t quite work for our palates. I was also hoping the house biscuits would have been flakier and more layered than simple drop biscuits. 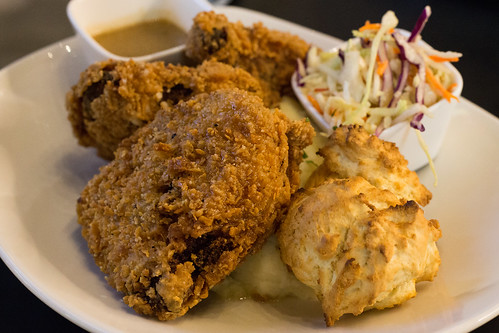 The organic BC salmon ($26) fared better, served with a bed of whipped potatoes, sautéed spinach and crispy shallots. The fish was cooked nicely, and as a whole, it was a refined plate that I wouldn’t have originally expected to find here. Reflecting their aforementioned seasonality however, they could have substituted root vegetables for the asparagus. 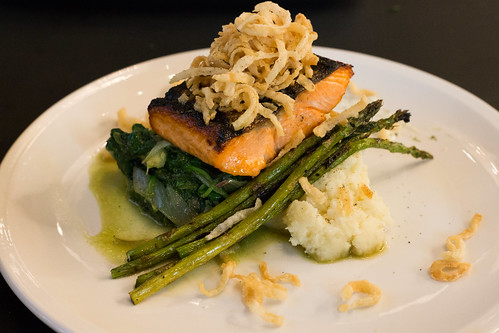 We didn’t have room for dessert, but continuing the theme of fun and games, the sweets menu is printed in the form of a paper fortune teller. 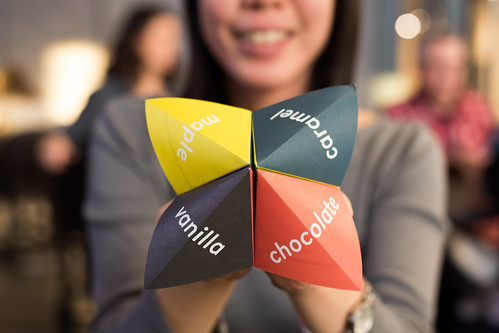 Although we’d likely return to THREE10 on future visits to The Rec Room for their appetizers, I’d prefer to round out my meal next time with a stop for poutine and a doughnut from The Shed, or perhaps a pizza from The Loft. The breadth of choices offered under the same roof at The Rec Room are what make the complex unique.

Before we departed, we took a spin through the amusements. Games are activated through credits purchased on an RFID bracelets, as opposed to using tokens, which can be cumbersome. For $20, 120 credits can be purchased, and most games we played cost between 4-6 credits per person. 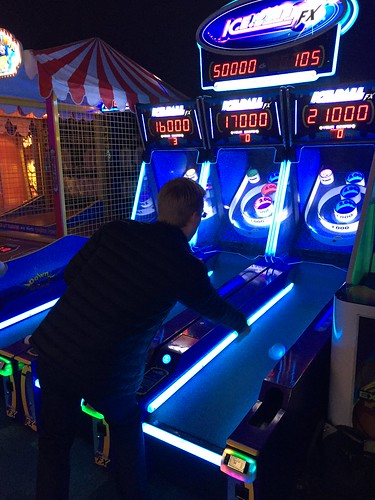 We had fun racing Mario Karts, playing a Skee ball equivalent, competing at basketball, and conquering Fruit Ninja and Crossy Road on big screens, among other games. 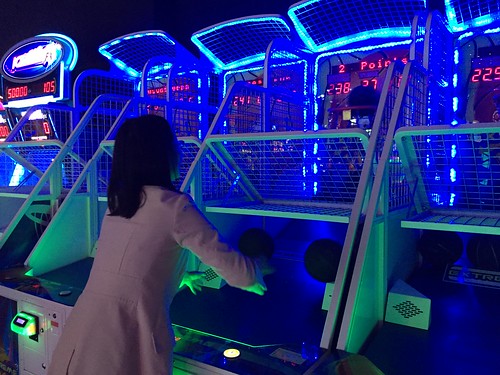 Hoops are my go-to amusement

Points achieved are recorded on the same RFID bracelet for convenience, and after a quick tour through the redemption room, it’s clear the prizes are much better than those found across the street at Chuck E Cheese. 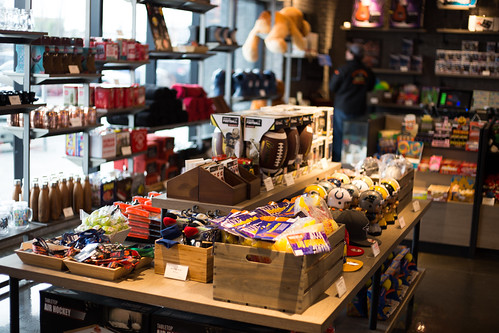 If you’re needing a break between errands at South Edmonton Common (especially during the busy Christmas season), consider stopping at The Rec Room for some games and a bite to eat.

Thanks again to The Rec Room for hosting us!