Two weeks ago, I had the privilege of attending the 2016 Gold Medal Plates, hosted at the Shaw Conference Centre in support of the Canadian Olympic Foundation. It’s been an incredibly successful fundraising event, having raised more than $11 million dollars for Canadian athletes since 2004. The culinary competition operated by Gold Medal Plates has become a benchmark for chefs in cities across the country, the preparation alone pushing chefs to refine their techniques, enhance flavour profiles and find the perfect beverage pairing. Those crowned at the local or national level are widely recognized for their achievement, and winning dishes can often be sampled at those restaurants for a taste of what judges deemed the best that year. Personally, I’d only read the results of the competition, and had never experienced it firsthand before this year.

Each of the ten competitors were tasked with crafting a dish and pairing it with a Canadian wine, spirit or beer. Unlike “mystery box” challenges that currently fuel reality television, chefs here are able to polish their dishes for weeks, meaning execution becomes the most crucial factor instead of thinking under pressure. Even in this year’s sample, it was wonderful to see the array of proteins showcased, and the diversity of cooking styles presented. If anything, it speaks to how fortunate we are to have such a rich food scene in Edmonton. 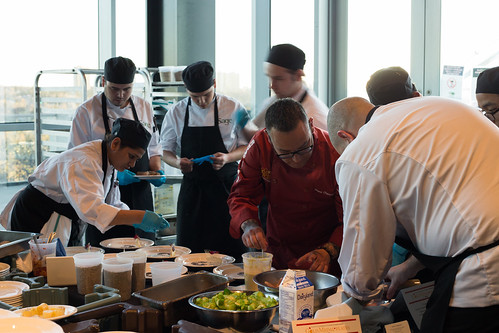 Chef Shane Chartrand and his team from Sage

Before the start of the competition, I chatted with Mary Bailey and was thankful for her advice (as a senior judge, she’s well versed in the tasting component). She said I needed to hustle, or I might not get to all ten stations. She was absolutely right; I picked up the last dish just before the closing bell. 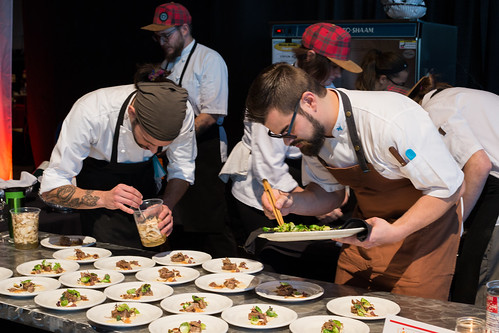 I was also glad to run into Teresa who was also in attendance that evening. It was fun to experience the event with someone else who was new to Gold Medal Plates, too.

My favourites differed somewhat from the judges’ selections. Mary had said this would likely be the case – the audience choices never seemed to converge with the official winners. My top pick was by Sage’s Shane Chartrand. His coal smoked albacore tuna was such a revelation that I actually paused mid-bite to savour it; the texture and flavour imparted was incredible. The sablefish also had a pronounced charcoal essence that I appreciated. 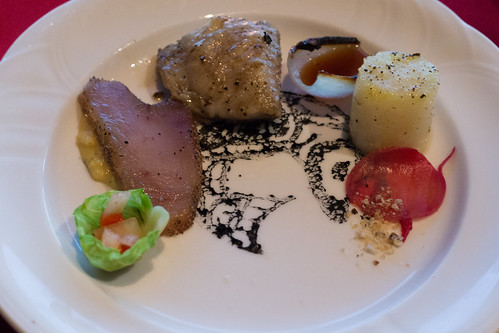 Charcoal and smoke from Shane Chartrand

I also enjoyed the dish prepared by Have Mercy’s Lindsay Porter. Her Alberta corn stone ground grits with shrimp, smoked Mangalitsa pulled pork, chanterelles and pecans was comfort food with refined flavours. Unlike some of the other plates, all components complemented one another well. 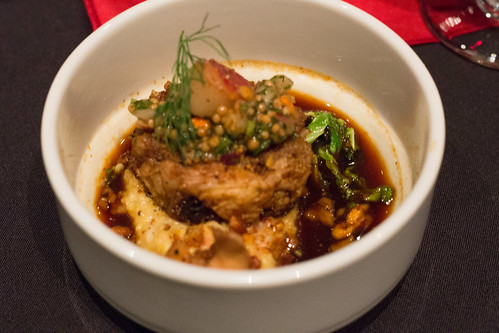 Corn grits with shrimp and pulled pork from Lindsay Porter

While dishes were meant to be paired with a beverage, one of my other favourites was actually a drink. The Caribeau cocktail from Chartier, a combiation of Fallen Timber Saskatoon mead, Alberta Premium rye whisky, birch syrup, Saskatoons, and spices danced on my palate, the hint of fruit balancing nicely with the spirit base.

The winners, as selected by the judges, were:

The first place winner of Edmonton’s Gold Medal Plates will compete in the Canadian Culinary Championship finale in Kelowna on February 3-4, 2017. I wish Chef Hanson the best of luck as he represents Edmonton! 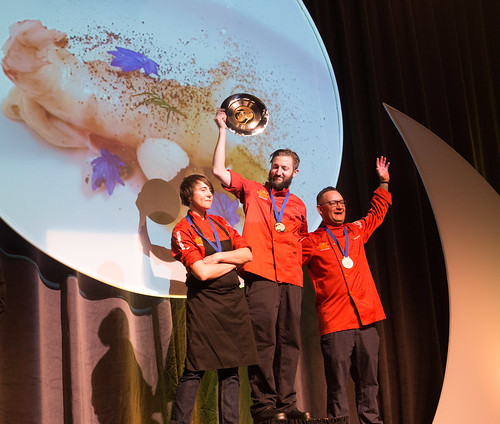 The “gold medal” portion of the event refers also to the Olympic athletes in attendance, ambassadors of how the funding raised can lead to success. Gold medalists from the recent Rio games, Rosie MacLennan and Erica Wiebe, were among the nearly three dozen athletes present. Being the Olympics junkie that I am, I couldn’t pass up the opportunity to fangirl and snap a selfie with Erica. She was extremely sweet and gracious. 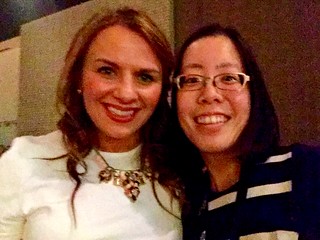 The athletes also like a good party, as evidenced by the finale that evening. Led by Alan Doyle of Great Big Sea, the athletes piled on stage for a raucous rendition of “The Weight”. My sister, a huge fan of kayaker Adam van Kouverden, would have appreciated his enthusiasm at the mic.

Thanks to the organizers of the Edmonton Gold Medal Plates for having me!