Before the Rush game on Friday night, Mack and I walked over to The Burger’s Priest to see if this Toronto transplant could live up to all of its frontier hype. The Burger’s Priest is among the latest of fast casual premium burger joints to invade our city, following in the footsteps of places like Fatburger, Five Guys and Smashburger. Promising a higher quality product, it does seem Edmontonians are willing to pay a premium for burgers classed a cut above fast food chains.

I’m sure it’s been just as busy since day one, but a combination of a long weekend and its newly-minted status meant it was a packed house. Being the polite Canadians we are, though, the table turnover was reasonably quick, so most who ordered weren’t left awkwardly waiting for a seat (otherwise, I was certain to flashback to our stress-inducing experience at Shake Shack in Manhattan).

As with the conversion of any other former dentist’s office or optical shop into an eatery, The Burger’s Priest is a compact space. But they’ve made the most of it, leaving a majority of the windows uncovered and incorporating as many seats as possible along the walls. Mack was saddened that like most of the businesses along the 109 Street strip, The Burger’s Priest also opted to hive off their Jasper Avenue entrance in favour of the door that predictably faces a parking lot. 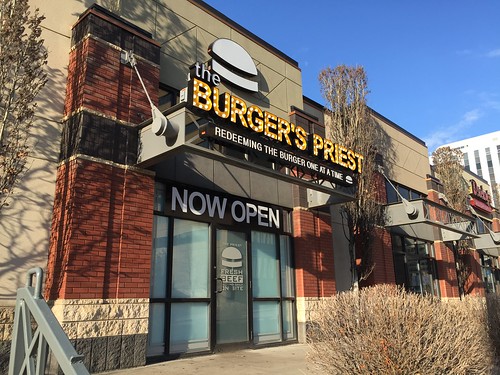 The Burger’s Priest offers a menu of ten different burgers (one vegetarian option), fries, milkshakes, fresh-baked cookies and ice cream sandwiches. I did find the tongue-in-cheek names amusing (the “Red Sea” is a cheeseburger with chili on top, while Lethal Weapon partners “Riggs & Murtaugh” inspire the name of their black and white shake). Mack and I didn’t hesitate before ordering – we knew we had to try the “Vatican City” ($11.99), double cheeseburger served between two grilled cheese buns. We also opted to share fresh cut fries ($3.69).

We didn’t have to wait long before our order was called up, piping hot and labeled to distinguish between Mack’s burger with all the fixings and my own. Unwrapped, in all its glory, the Vatican City was definitely a photogenic burger, the melted processed cheese calling back to adverts we’ve all been conditioned on. The patties themselves were juicy (The Burger’s Priest prides itself on grinding its beef on-site), but the seasoning could have been more consistent throughout. I also could have done with just a single layer of meat, so as to better emphasize the grilled cheese buns. 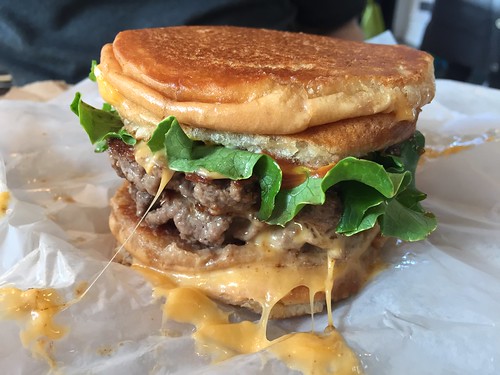 In all honesty, Mack and I both went into the experience hoping to find an Edmonton version of our Portland revelation – the YouCanHasCheeseburger from Brunch Box. $6 for a burger bookended by two Texas toast grilled cheese sandwiches – no pretense, just a well-made burger. But we didn’t find that solace in Vatican City. 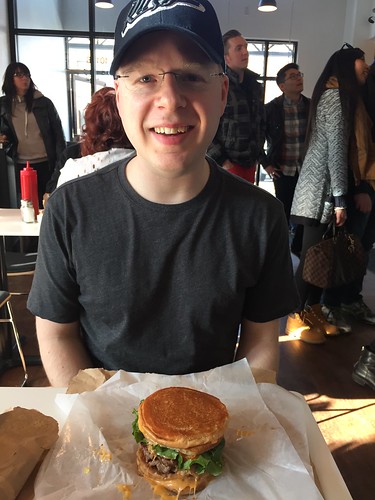 Mack about to dig in

The fries were fine but nothing special, and one order was more than plenty for the two of us – I’m not sure how an individual could finish a single order of fries on their own. 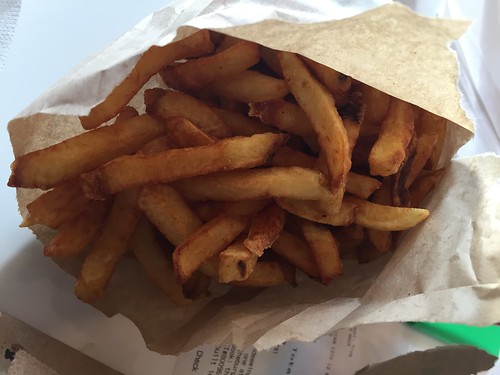 So although we didn’t find a burger that met our Portland standard, it will be handy to have a grilled cheese sandwich burger option in the neighbourhood. And even better, it’s one we’ll have to walk to, in order to build up an appetite…and to walk it off afterwards.