Before our gala dinner, we joined a small group inside the clubhouse kitchen for a VIP session with Chef Bob Blumer. Known as the energetic host of shows such as Glutton for Punishment and World’s Weirdest Restaurants, we were hoping Bob’s humour and enthusiasm would come through. In the end, we thought he had planned the perfect cocktail hour session, featuring recipes for both a drink and a nibble. 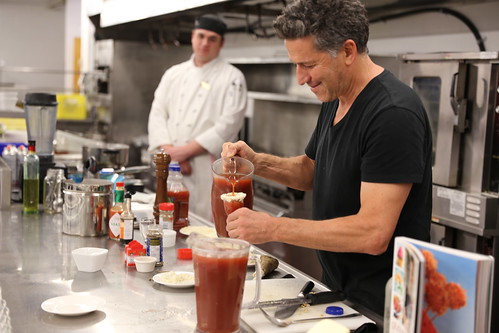 Bob’s cocktail of choice was a caesar, made with a lemon vodka and a special rim. For additional kick, Bob recommended using honey and freshly grated horseradish. Mack, who is definitely a caesar fan, gave it a thumbs up. 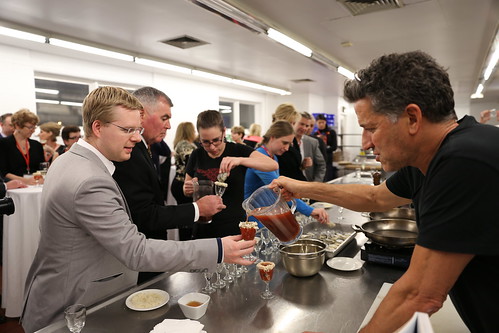 For his cheeky shrimp on the bar-b, Bob continued the spicy theme with pan-fried chipotle-rubbed shrimp. Served with a cilantro dipping sauce, it was a tasty one-bite appetizer. And how is the dish related to its name, without reference to a grill, you ask? Simply serve the shrimp accompanied by what else – a Barbie doll. 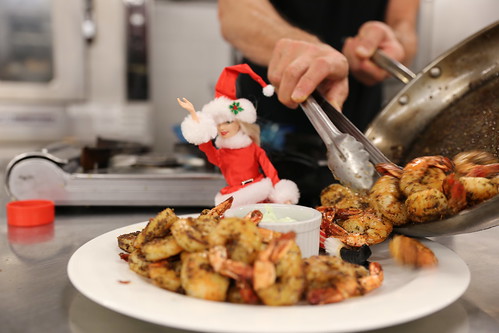 Shrimp on the Bar-B

For his final trick, Bob attempted to sabre a bottle of champagne, a trick he had taught fellow presenter Chef Lynn Crawford earlier in the week. Unfortunately, he must have had a faulty bottle, as his several attempts failed. It was a little nerve wracking to watch – a few of us were convinced the bottle would shatter before the end. 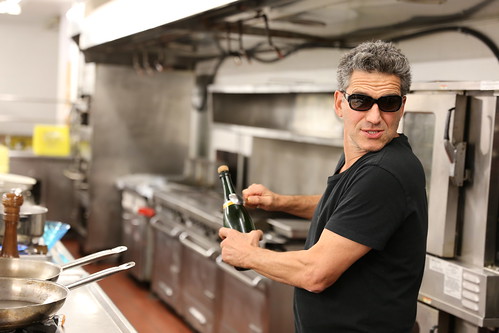 Thanks to Bob for a fun start to our Christmas in November evening!

We headed back to the main lodge for the gala dinner. With everybody dressed up, it was a good time for photo ops. 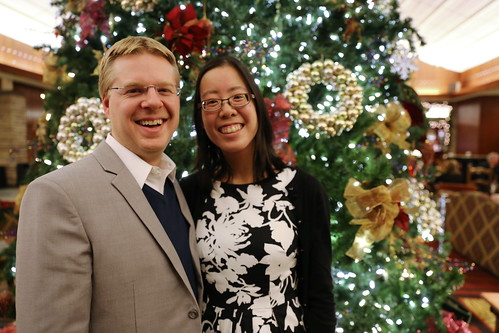 Santa was even on hand to make sure adults weren’t left out of the seasonal pose. 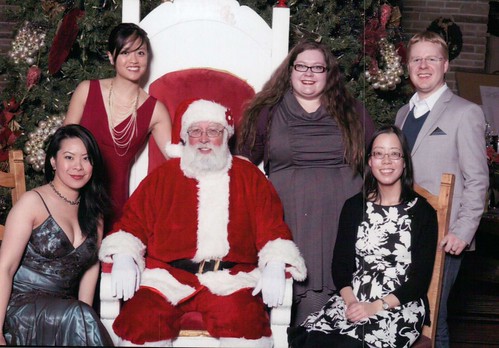 With Diana, Vincci and Brittney (aka the Gastropost crew)

Jasper Park Lodge had pulled out all of the stops, decking out the reception hall in sumptuous linens and holiday colours. 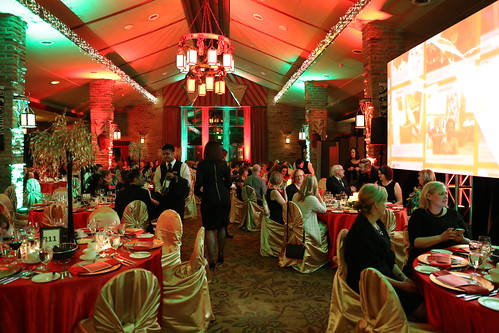 They had also organized great entertainment. The Willows, a trio based out of Toronto, sang a series of retro-inspired Christmas songs that lent a classic lounge feel to the room. 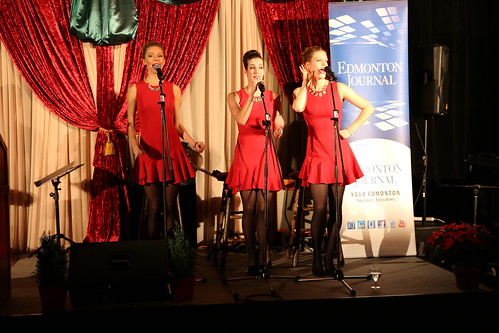 Dinner, unfortunately, was a little less consistent than our banquet lunch earlier in the day. The mountain foraged mushroom ravioli was pretty good, topped with braised beef short rib, but the buttermilk brined Alberta pork tenderloin was dry for most around our table (though I recognize tenderloin would be a difficult cut to prepare well for such a large crowd). 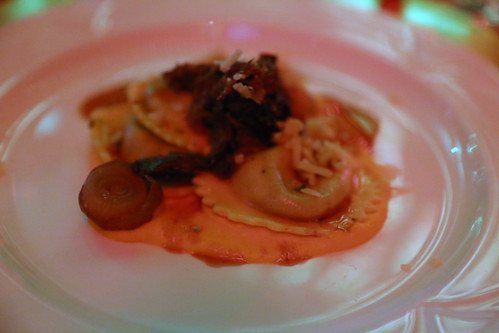 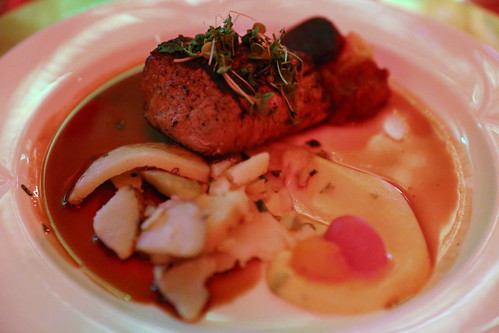 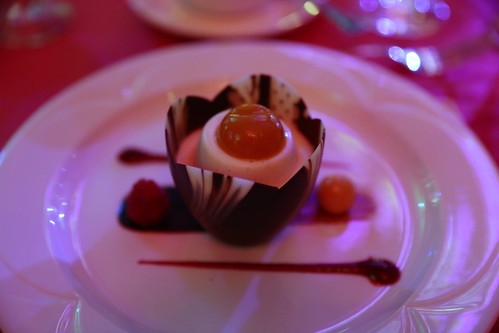 Before the dance closed out the evening, guests were treated to an “impromptu” Chopped-style competition, with teams drawn from attendees and presenters. 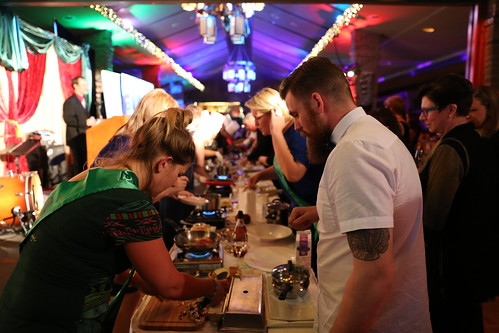 Chef Lynn Crawford (dressed as Santa) was the judge, and as the competition progressed, she narrated the proceedings for the crowd’s amusement. As you would guess, it was more than a little chaotic, but I had to respect the contestants. Cooking under the tenure of celebrity chefs isn’t easy, and they did it with good humour and grace under pressure. The winner of the contest was the team led by Charcut Chefs John Jackson and Jessica Pelland (the latter of which has actually won Chopped Canada). 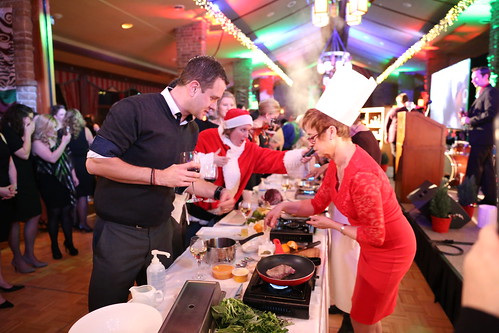 A live band came on to close out the night, but Mack, Brittney and I had other ideas. We had spotted a games room in the basement of the lodge, and had time for a few rousing games of air hockey. 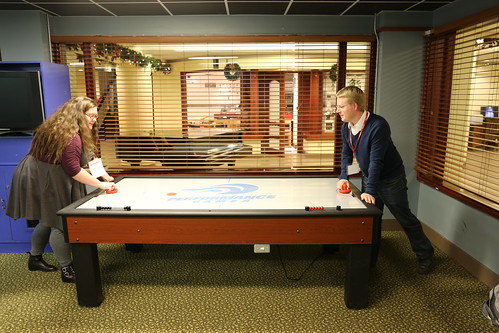 Back in our room for the night, we realized the staff of the hotel had been by for turndown service. It was the first time we’ve experienced this service, and though it wasn’t necessary, the Jacek truffles were a sweet surprise. 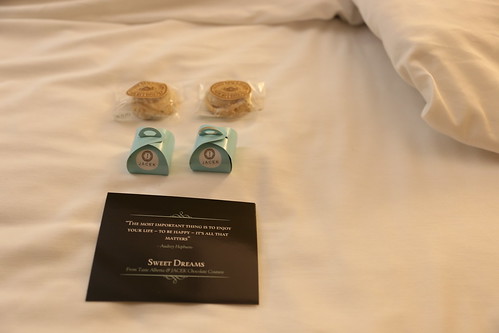 It was a fun day full of learning, food and big personalities. We were glad to rest up for the last day of sessions.