When I first heard about Dîner en Blanc, I was entranced. It started in Paris 25 years ago, as a way for François Pasquier to meet with friends, all dressed in white so they could find one another. From there, the idea spread to cities around the world, from Singapore to South Africa. The photos of hundreds, sometimes thousands of people dressed in white were romantic, ethereal, almost surreal. I loved the idea of gathering in a public space, turning al freso dining into a shared experience. And after reading about the first Diner en Blanc in Calgary last summer, I thought, why couldn’t this happen in Edmonton?

Last October, my query to the Dîner en Blanc officials informed me that someone had already taken the initiative in bringing the event to Edmonton in 2014. What I didn’t know at the time was that it was, in fact, a Vancouver-based company that had purchased rights to Diner en Blanc in Western Canada. That company worked with locals Christina Ignacio-Deines and Nestor Turcyzk of Connected Entertainment to organize it in Edmonton, but what had originally seemed like a grassroots function was quickly getting top-heavy.

After the Edmonton date was officially announced, it became even more clear that it was an event I was only meant to attend as a participant. Although they were aiming for a crowd of 1,200, we heard from multiple people who weren’t able to secure an invitation. It also wasn’t particularly transparent how attendees were ultimately selected, though personally knowing one of the hosts was probably your best bet (this was how we ended up on the list). As such, there was definitely an air of elitism associated with Dîner en Blanc right from the start.

In the weeks leading up to July 17, we had already spent $161 (covering our membership, participation fee and two meals without alcohol). As more information was released about the specifications of what we were required to bring with us, we realized the true price of admission was closer to $300. We ended up purchasing a clear, Diner en Blanc-approved umbrella, white pants for Mack to complete his white ensemble, renting white chairs and linens from Special Event Rentals, and, as we were in the pedestrian group, a dolly so we could more painlessly transport our items to the site. 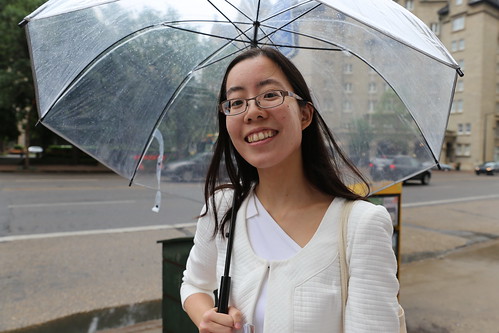 On the evening of July 17 (I thought Thursday was an odd day of the week to choose, but it is standard for all DEB events), Mack and I headed to Telus Plaza, our set meeting place. Being among the pedestrian group (as opposed to one relying on bus transportation), arrival time didn’t seem as vital, as people seemed to trickle in. It was a bit chaotic, as everyone sought out their table leaders, but it worked out fine. 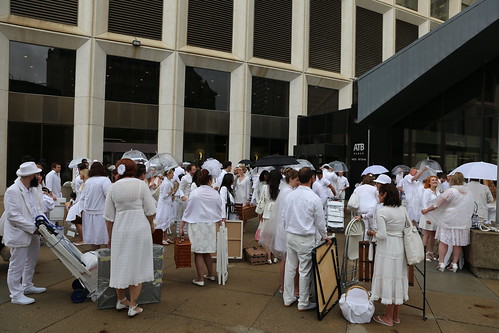 Just before we set out, we were finally told that Louise McKinney was indeed our final destination. Though I am the type of person who would have preferred to know this information in advance, I have to admit, the reveal was an integral part of this event. 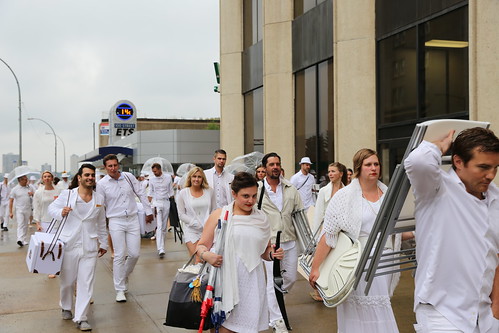 Our dolly was the best investment

When we arrived to a fenced-off portion of Louise McKinney in front of the Shumka Stage, we were directed by our table leader to set up in a particular row. After doing so, we picked up our food from the Century Hospitality tent, “designer water” from the Evian tent, and observing that others had started their meals already, attempted to stay as dry as possible through dinner (and though it wasn’t explicitly forbidden, one would think the tents some brought took away from the sightlines). 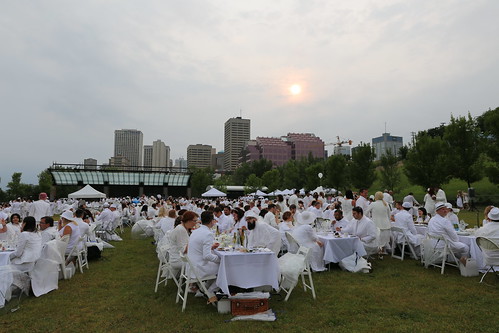 A bit of sun

Special guest acrobats from Cavalia were on-hand to kick off the festivities (the napkin waving opening), but after that, as no one was sure about the pacing of the event, it seemed most were eager to finish their food. A rough schedule could have been outlined, or at least, announcements (through the speaker system, as weak as it was) that we were on the right course. 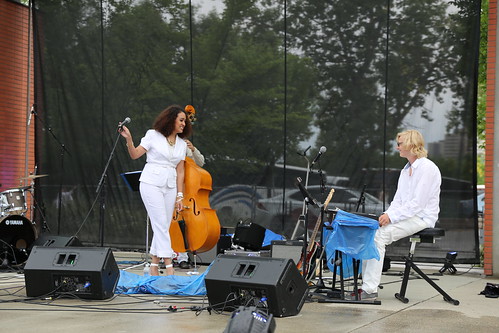 It was really unfortunate that the weather didn’t cooperate – it really would have been a different event had it stayed dry. We were probably lucky the rain wasn’t worse. And while it’s true that the participants soldiered through regardless, by the end of the night, it wasn’t pleasant being both wet and chilly. 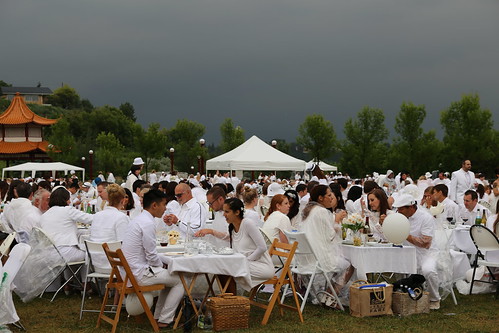 For an outdoor picnic, I was surprised at how little emphasis seemed to be placed on the food. Some people had brought wonderful spreads, and our own prepared meals were full of flavour. What seemed to be more on display, however, was the fashion. I guess the opportunity to dress all in white attracted a crowd I wasn’t used to seeing, or at least those who took the time to source everything from white capes to fur coats to fascinators. 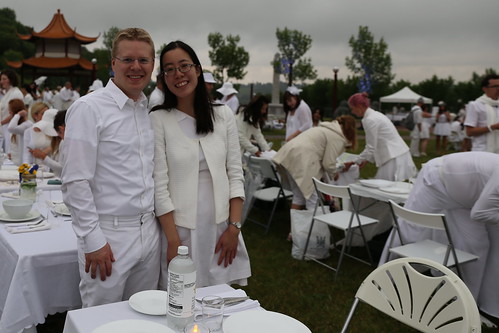 Dressed in our whites

There had been ample time for socializing, and because of the lack of information about the itinerary, our area had seen more than a few pairs depart by the time they announced that soon it would be time to light the sparklers. They moved this tradition up about an hour because of the impending rain, not a moment too soon. But even this defining DEB moment lacked coordination – without an announcement from the stage, groups across the field started sporadically lighting their sparklers. It was a great way to cap off the night, but really could have been timed much better. 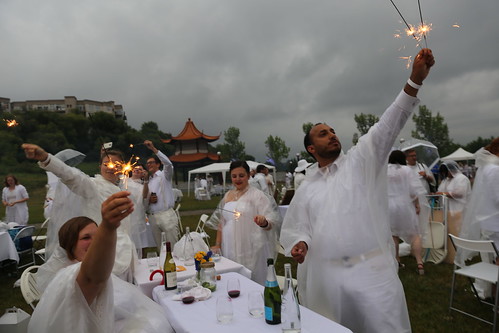 Let there be light!

The wind and rain picking up, we packed up to go. Though the instructions were to take our garbage with us, no one did so, leaving an unsightly pile clustered around the few permanent bins around the park (and had this really been an expectation, could they not have chosen a lighter weight water container than glass bottles?). There was also a ton of confusion about the on-site rentals drop-off point (a privilege that we paid additional dollars for). None of the volunteers seemed to know where to direct us, and we eventually left our rentals near the stage. When walking out of the park, we encountered the Special Events Rentals truck. Had we not had our name checked off, we would have been charged a late fee.

I recognize this was the first year of Dîner en Blanc in Edmonton, so some hiccups were to be expected. But – after shelling out nearly $300, one would expect a well-organized affair, particularly with the event’s association with a company that has already hosted numerous DEBs in other cities. And though it was a spectacle of sorts, and novel to have been a part of the inaugural event in Edmonton, it’s unlikely Mack or I would participate in another Dîner en Blanc.

Mack, Liane and Robyn also wrote about their experiences.