With the number of restaurants that have joined the dining scene in Edmonton over the past six months, it sometimes feels like I’ll never catch up! And because Mack and I don’t typically gravitate towards recently-opened establishments in moments of spontaneity, I find we usually have to plan in advance to make sure we end up at a new spot. That was the case with The Glass Monkey, where Mack and I had dinner on a Saturday night in March.

Located in a Lendrum strip mall, The Glass Monkey replaced Jack’s Grill in December 2013. When it opened, its claim to fame was perhaps that Chef Darcy Radies (formerly of The Blue Pear) was involved in the menu development, which for me elevated my expectations for an innovative and creative menu, under the restaurant’s gastropub concept.

Walking in that evening, we found a fairly packed dining room. I had made a reservation a week prior on Open Table, however, so wasn’t worried. When greeted by the hostess, she first indicated that she needed to grab an “extra chair” for our table. Then, we were led to a windowless corner, seated at a table adjacent to a bar-height four-top, which made our placement even more claustrophobic. I recognize the choice of tables at that time was slim, but needless to say, we weren’t off to a good start.

Unfortunately, the menu choices didn’t remedy things. First off, wines were pricey, averaging at least $15 per glass. It was also somewhat surprising that The Glass Monkey doesn’t offer a cocktail menu. Following the lead of other cities, restaurants in Edmonton have begun to adopt quite quality cocktail programs (Woodwork is perhaps the best example). Though cocktails alone aren’t deal breakers for younger diners, given the comments from the previous owner of Jack’s Grill relating to challenges of attracting younger customers, it does seem like an oversight. The crowd definitely seemed to skew older that night, but that could have been an anomaly.

The Glass Monkey has a fairly large food menu, but it felt scattered and unfocused. It’s rare for us not to be swayed by small plates, but nothing from that section of the menu enticed us. It probably didn’t help that the chefs decided to retain a number of dishes from Jack’s Grill – it would be difficult for any restaurant to develop a new identity when beholden to its previous incarnation. We ended up ordering pub standards – burgers and pizza.

I was given a temperature choice for my sirloin beef patty. Though I requested medium rare, the burger arrived well done, no pink to be seen. Thankfully, it was still quite juicy, and the generous amount of Sylvan Star Cheese was a nice accompaniment. I should note that the fries were a delight, crispy and thicker than the shoestring style so popular these days. 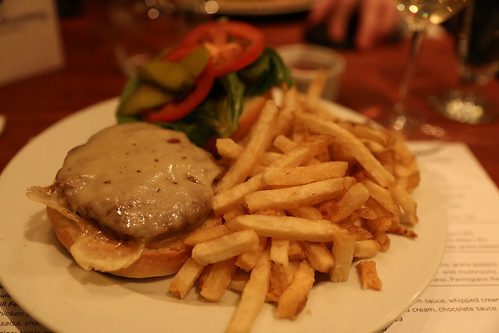 Mack’s Hawaiian pizza ($17) featured a crisp crust, and nicely smoked pork. He would have preferred more pineapple, however, as it was shaved very thin. 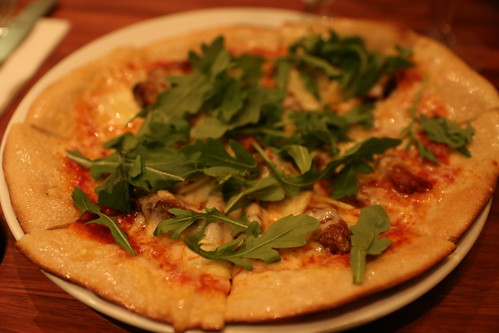 Service was fine – our server was courteous and professional, and in spite of the demands of tending to many tables, managed to be present.

While the food itself was fine, overall, our experience at The Glass Monkey was disappointing. With so many other new restaurants still left to visit, I’m sure it will be some time before we consider returning again, especially since the menu didn’t leave us wanting more.