Mack and I were in the west end running errands over the weekend when hunger pains hit. We ended up right by Swiss 2 Go (17104 90 Avenue), a sandwich shop I had heard a lot about, so took it as an opportunity to finally set foot inside.

Situated right across from West Edmonton Mall, it’s a humble storefront that would be easy to miss. Swiss 2 Go is essentially a takeout counter, with a handful of tables for those seeking to dine in. 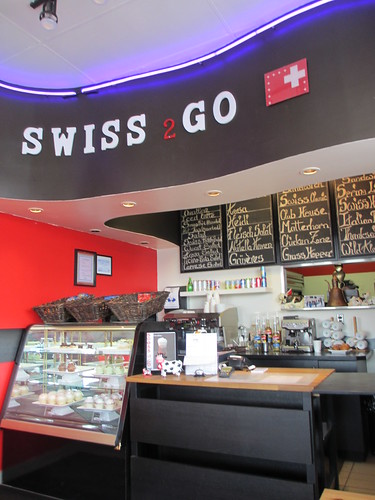 The menu focuses on sandwiches, though soups, salads and homemade desserts are also available. The current menu has fifteen different sandwich varieties to choose from, all an upgrade from those typically found at a deli. Their Italian Bride, with prosciutto, roasted red pepper, sun dried tomatoes, bocconcini and basil was even recognized by Avenue Magazine as one of the Best Things to Eat in 2013.

It was clear that owner Drita Keller cares deeply about the ingredients used in her creations. She shared with us that she continues to import cheeses and meats from Europe because of their consistency and quality, and it was evident that the vegetables used were crisp and fresh.

The sandwiches were made fresh to order, and when they arrived, I wasn’t sure how I’d be able to pack it down to take a bite! My Thanksgiving ($7.99/regular) sandwich, with smoked turkey, brie, romaine and red pepper was loaded with texture, the mild and creamy cheese letting the turkey take the wheel. Mack similarly enjoyed his Matterhorn ($7.99/regular), containing banana peppers, avocado, cilantro and alpine style dried beef. 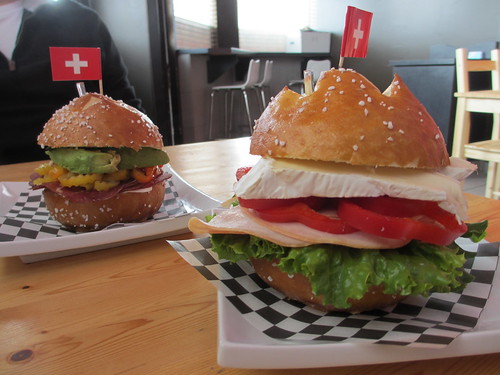 While the combination of ingredients was unique, what set the sandwich apart was the house-made pretzel bun, studded with kosher salt. Given we haven’t yet found a local supplier who offers pretzel buns similar to those found at Calgary’s Rustic Sourdough Bakery, this might be the closest we’ve ever come. During the week, Drita said they run through so much bread that they may be baking up to ten times a day!

If you’re in the area, make it a point to stop by Swiss 2 Go. You won’t be disappointed.