Growing up, hot pot was very much a family affair. It was a way, with comparatively less effort than cooking, for my Mum to gather us all around the dining table. Sure, she’d have to source ingredients in Chinatown (fresh vegetables, meats, tofu), then prep them for consumption, but it was definitely one of her go-to meals on nights she didn’t feel like spending too much time in the kitchen.

For a brief period of time in high school, hot pot restaurants were the birthday venue of choice, given they could easily accommodate large groups (and given the appetite of some of those teenage boys, the buffet-style offerings were ideal).

Since that time, hot pot has been something I’ve enjoyed exclusively at my parents’ house. As a result, it’s been easily over ten years since I’ve stepped foot inside a hot pot restaurant in Edmonton.

Cue the local hot pot revolution, with two new restaurants opening up in Chinatown within six months of each other, located less than a block apart. And not only are they reinvigorating the hot pot scene in the city, but they are also injecting new life into the area.

Both Urban Shabu and 97 Hot Pot have brought the trend of individual hot pots to Edmonton. I have to say, when I first heard of this set-up, I really balked at the idea of reducing a communal experience to an individual one. What I didn’t take into account at the time, however, was that the seduction of convenience and control would win me over, too.

97 Hot Pot moved into a storefront in Chinatown that had been vacant for years. The owners overhauled the space with eye-catching signage and a brand new interior. It’s bright, clean and welcoming, and if this trend continues with other businesses, will hopefully help chip away at the stereotypes that continues to plague the neighbourhood as a whole. In addition, it was refreshing to see the number of younger patrons dining in that night – based on my own high school experience, it’s not surprising, but it does give me hope for Chinatown’s immediate future. Last month, I had dinner at 97 Hot Pot with Maria and Roxanne, and learned firsthand what all the fuss was about. 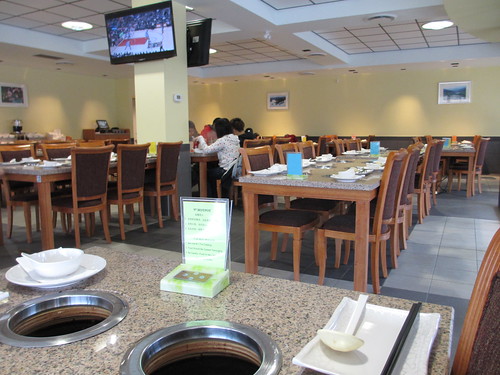 All of the tables had built-in induction burners meant to accommodate individual pots. As a result, instead of the circular tables to accommodate larger parties at communal hot pot restaurants, all tables were rectangular. Although we still ended up sharing everything, it was a nice change not to have to reach for the pot, or to argue over who put in that last tofu or meatball. Individual hot pots will do much to smooth over family conflicts at the dinner table, heh. 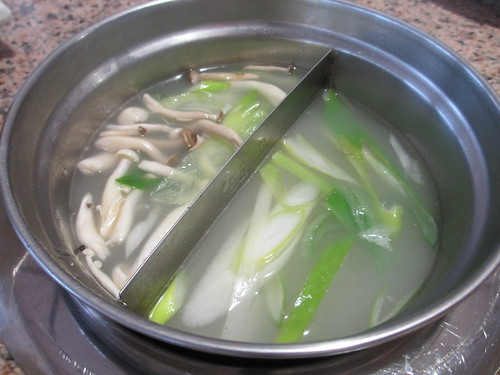 97 Hot Pot charges $25.95 per adult, and $12.95 per child aged 3-9. Choosing a soup base other than the basic chicken broth adds $2 to that cost, as does opting for the choice of two broths in a divided pot. In addition to the selection of about one hundred different raw and fresh meat and vegetable items, salads, cooked dishes and desserts are also included in the per person cost, making this one of the most value-laden buffets in the city. It also differentiates the dining out version of hot pot from its home-based cousin; it isn’t economical for a family to purchase the kind of variety that can be found at a restaurant, and when a group of picky eaters is present, the range of options should satisfy everyone. Our only minor quibble with the ordering system was that it wasn’t logical – specifying “1” vs. “2” or “4” would yield seemingly random amounts of food.

Given the breadth of choices, I was happy to see that 97 Hot Pot didn’t sacrifice quality for quantity. The greens were crisp, and the sliced meats were fresh. I easily consumed a half pound of sliced lamb that night. 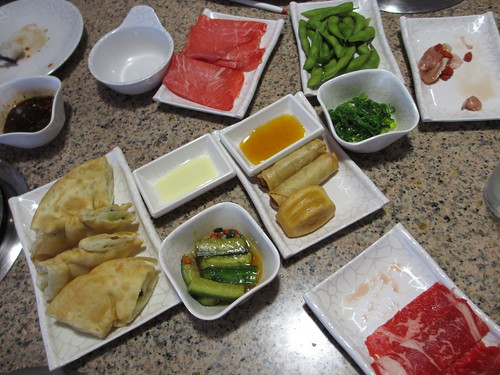 Spread part one (I forgot to take pictures later on, unfortunately)

97 Hot Pot introduced me to the oddly translated “fresh meat and seafood mash” – blended meat and herb mixtures served up in plastic sleeves. Using a plastic spoon, the meat is meant to be dropped into the boiling soup to create meatballs. They were darn tasty, and like the cooked dishes, really added value to the meal. 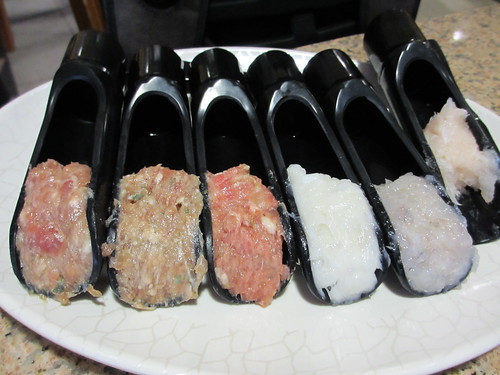 We spent the better part of two and a half hours at 97 Hot Pot. Although the menu indicated that only two hour stays were permitted, we never felt that the service staff were trying to push us out. Refills on soup and water were timely, and orders were taken and delivered in a punctual fashion. Dessert was a bonus, and the sweet soup (tong sui) was notably well-prepared. 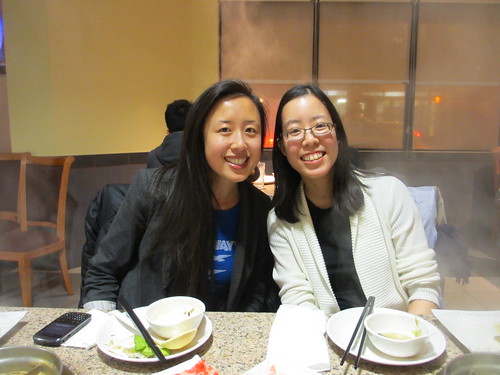 Maria and I amongst the steam (from now on, I will be making more frequent visits to hot pot facilities during the cold weather months – the chicken soup sauna was like a gift for my winter-disparaged skin)

I had a great experience at 97 Hot Pot, and would not hesitate in recommending it to those new and familiar with this type of dining. I really am hopeful the additional traffic to Chinatown from both new hot pot ventures will turn the tide in the area, and spur even more development in the neighbourhood.