Kasey Ramen Grows With Help from the Community

In just 16 months, upstart Kasey Ramen has transitioned from a home-based business offering ramen kits to hosting pop-ups in an Edmonton restaurant.

Kasey Ramen proprietor Allen Gao has had a keen interest in food for years. “Since high school, I’ve had friends over and cooked food for them,” said Gao. “It’s my way of showing that I care about them.”

After graduating from the University of Alberta in 2020 with an environmental engineering degree, Gao was unable to secure a job in his field. So, while working in engineering-adjacent positions, he started to further explore his passion for food.

“Ramen was the one food that stumped me,” said Gao. “All other times I could crack open a recipe and make it work. But I couldn’t crack ramen. And ramen was one of my favourite foods growing up.”

Gao then stumbled upon a YouTube channel called Way of Ramen that changed everything for him. “Ryan Esaki was the first person on the internet making really good videos of how to make ramen,” said Gao. “Through Way of Ramen I was able to discover a whole community of online ramen makers doing it professionally or at home.”

In November 2020, Gao made his first ramen kits under the Kasey Ramen banner (“Kasey” is the sound of the initials in Gao’s Chinese name, “Kechao”). He gave 15 kits out to friends as samples, and sold 15 more to individuals he was connected to on social media. Once it grew to a point where he was selling to people he didn’t know, he knew he had to move into a commercial kitchen.

In September 2021, the folks behind District Café offered him in-kind use of their bakery space to make his noodles. A month later, he was connected to Ark Café, which had commercial kitchen space available for rent. Both businesses now serve as pickup locations for his ramen kits, which sell out every week within hours of being posted online.

“The limiting factor was actually being able to make enough noodles,” said Gao. “Prepping at District has allowed me to grow exponentially. I did 40 servings a week in September, and then 60, and now I’m doing 150.”

Kasey Ramen will host its first pop-up at District Cafe on March 27 and 28. “I’m excited to serve people and see people eat the ramen,” Gao said. “I’ve only seen online feedback, and sometimes it’s difficult when it’s just through a screen.”

Gao defines ramen as “any noodle dish that has some sort of Japanese flavouring, like soy sauce or salt, that has some sort of alkaline noodles.” His approach involves pairing his scratch-made noodles to the soup being served. For instance, for a recent kit that included ground pork instead of pork slices, Gao made a softer, chewier noodle, so it could better grip the sauce.

After Gao was laid off from his job in November 2021, he focused on Kasey Ramen full-time. While he is the sole employee, he credits the support he has received from friends and family, from designer Ivy Mak, who creates each kit’s illustrated instruction sheet, to his girlfriend Shannon Wong, who bakes the treats offered alongside each week’s kit. Still, he acknowledges the challenges of making such a business sustainable.

“The last thing I want to do is sacrifice my integrity to make a bad product,” said Gao. “I could see how it could be tempting to use the shortcuts that some restaurants use. I feel like for me, the entire brand is about accessibility and craftsmanship.”

Gao hopes to host one pop-up a month, but will continue with the ramen kits when possible. Ultimately, he would like to open his own restaurant, and help further educate diners to want better ramen. And though it hasn’t been easy, he couldn’t imagine doing it anywhere else.

“It’s really scary to think about my own ramen shop, but in a city like Edmonton where the community is so supportive, I am not afraid of failing.” 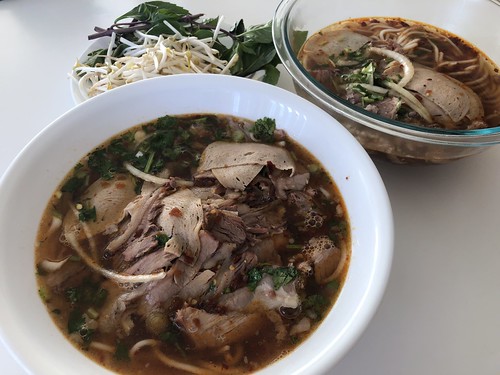