When the news broke in March that the City Market would not be returning to its outdoor home on 104 Street this year, reaction was mixed. While some were excited about the idea of a permanent, year-round space, others grieved the loss of something that has become a summer tradition for many.

The City Market was one of the reasons why we decided to move to 104 Street, and I had already been looking forward to showing Emily how our front step transforms every Saturday. There’s no question the setting of 104 Street will be hard to replicate elsewhere; the combination of historic facades, mature trees, independent businesses, and residential concentration all helped create the welcoming and lively atmosphere that attracted visitors from across the city. 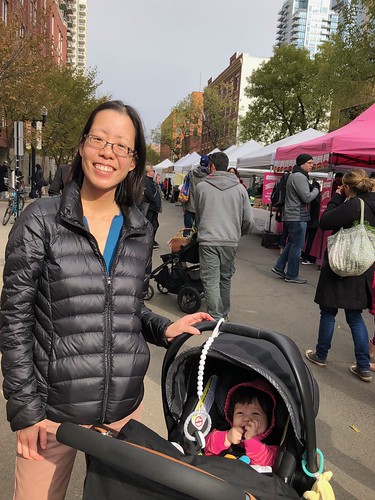 That said, I recognize that the success for outdoor markets is very much weather dependent. Although rain, sleet, and snow has never deterred our family because of our proximity to the market, we acknowledge that many vendors rely extensively on fair weather customers. The last few years have also seen rough inclement conditions, including several windstorms that resulted in early closures as precautionary measures.

So although I’ve slowly come around to being open to the City Market’s new home, I know that many people have some unanswered questions:

The market announced that its opening weekend in its new location will take place May 18-19, 2019, transitioning from one day per week to twice weekly. The Board worked with the City on securing a lease for the Great West Garment Building (also known as the GWG Building), at 97 Street and 103 Avenue, in addition to the permission to animate some of the nearby streets. 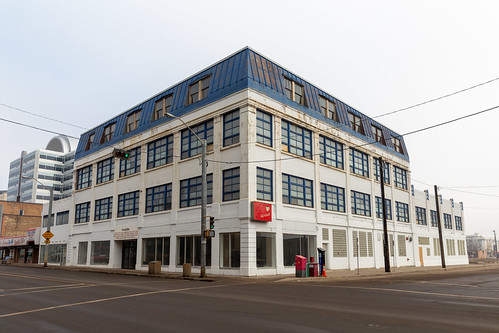 The building has been vacant for more than a decade, having most recently operated as the Red Strap Market that closed in 2007. Built in 1911, some of the original features, including the hardwood floors and pressed ceiling tiles, remain as historical marvels. If the renovations are done right, it could be stunning. 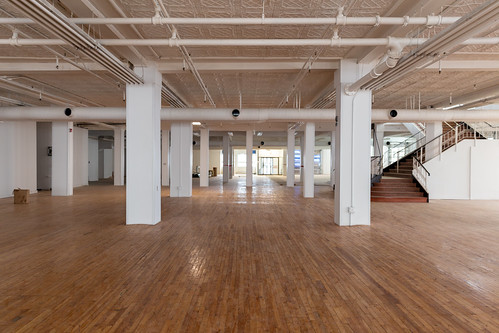 However, given the short timeline, we’ve learned that the market will operate outdoors this summer. When we toured the space in mid-March, washrooms were under construction, and they hadn’t moved to creating vendor stalls yet. 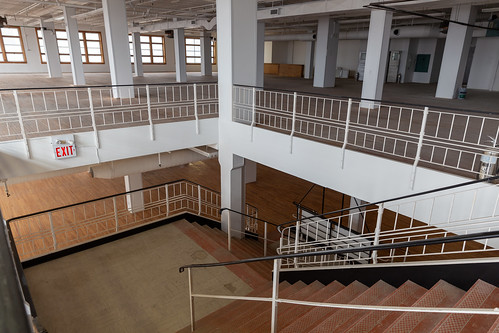 Planning for two floors of vendors

When completed, vendors will occupy the first and second floor of the building. The market is currently exploring options to program the third and fourth floors.

2. What can visitors expect from the City Market this summer?

The outdoor City Market will have quite the footprint in the Quarters, taking place not only on 103 Avenue but also spilling onto the Armature on 96 Street. 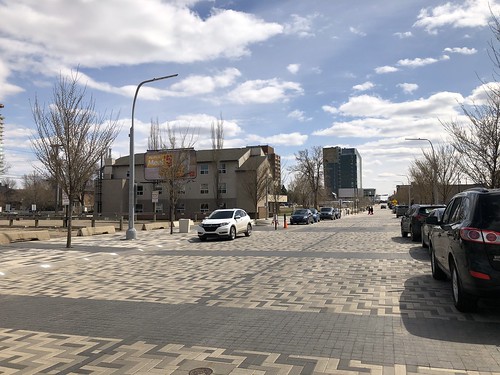 Although a majority of the street may be the same width as its previous home of 104 Street and 102 Avenue, the lack of mature trees and active street-front retail make it feel quite different. In addition, the size of the two adjacent parking lots on 103 Avenue may provide convenience to some shoppers, but ultimately may bring a level of car traffic and noise that can disrupt the ambiance. 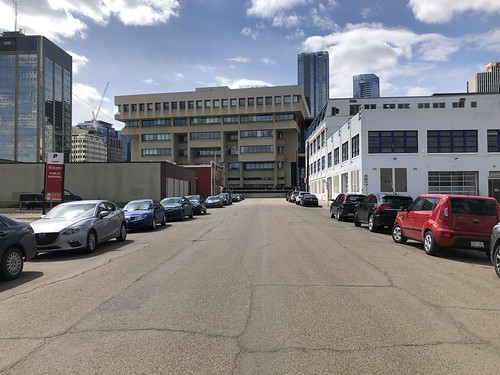 Dog owners will be happy to hear that the market will permit four legged visitors. Guidelines for etiquette are in place, but otherwise, bring your puppy!

I do think the market’s new location could open up new opportunities for Chinatown South. In touring people through the area over the past two summers, people were interested in learning more about the cultural buildings and services located in the Quarters. Some in the Chinese community have already routinely organized events in Kinistinaw Park on the Armature, so it would be great to see even more engagement from the public because of the market’s presence. 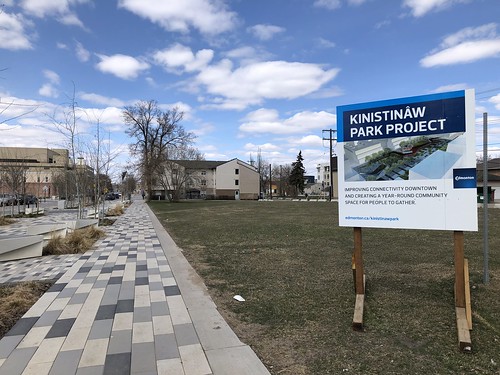 Kinistinaw Park, along the Armature

3. How will the new indoor City Market experience compare to other indoor markets?

Old Strathcona Farmers’ Market has held exclusive court over being Edmonton’s only year-round market. Because of that, some have wondered why they haven’t shifted to a multi-day operation.

A newcomer to the scene has shaken things up, and is perhaps one reason the City Market has already committed to Saturday and Sunday hours. Bountiful Markets, set to open in June in a light industrial area at 3696 97 Street, will be operating three days a week, Friday to Sunday. Some of the same vendors who sell at both OSFM and the City Market will be at Bountiful, including Irvings Farm Fresh, Riverbend Gardens, and Doef’s, but it’s likely a multi-day public market will also attract new vendors who could benefit from the additional hours. Bountiful also promises a food court with multiple options, which may be more appealing to many, in addition to an entertainment stage and a kids play area.

Bountiful Markets may be Edmonton’s answer to the revamped Calgary Farmers’ Market, which moved off Blackfoot Trail in 2014. The renovated flea market has survived its competitors (for a variety of reasons), and is so successful it will be opening a second location in northwest Calgary in 2020. 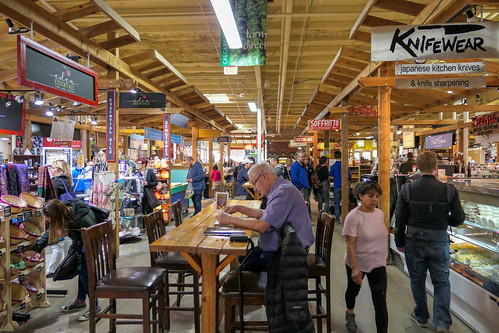 The Calgary Farmers’ Market seems designed with the intention of getting customers to linger – through a large food court with ample seating, a kids play area, and special events. I’ve also always found it very easy to navigate the wide aisles – even on our most recent visit in April with a stroller. 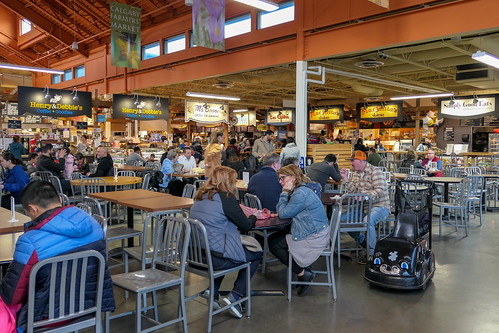 Given Bountiful’s opportunity to transform an empty warehouse to spec, it seems the Calgary model (including choosing a location really only accessible by car) is what they may be trying to emulate.

4. Will the new indoor City Market have a food hall?

Food halls are a hot trend in North America, with choices carefully curated and the quality elevated from a typical food court. The City Market has a food fair in its plans, with a dozen vendors proposed.

Mack and I checked out Calgary’s Avenida Food Hall & Fresh Market in April. It opened last fall, and though they have a few fresh food vendors, a majority of the stalls are dedicated to prepared food (interestingly enough, they also had a hybrid vendor – Sunworks Farm had a stall selling their fresh cuts of meat and some other products, but it was also equipped with an oven so they could sell hot rotisserie chickens). 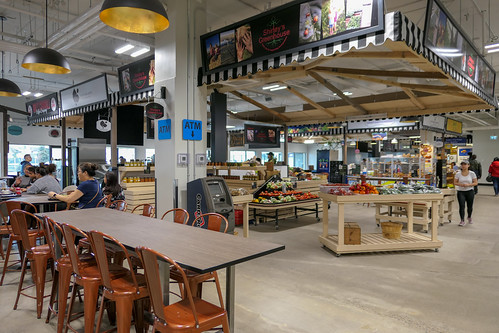 My favourite thing about Avenida was the diversity of the food they were offering. In addition to the more conventional Italian and Southern Barbecue stalls, there was impressive representation from other ethnic cuisines, including Mexican, Salvadorian, Ethiopian, Indonesian, Thai, Indian, and Japanese. 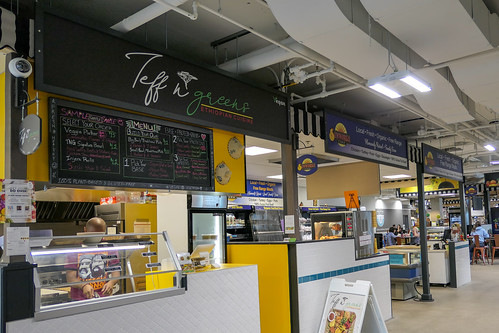 Some of the food options in Avenida

There are currently plans for a food hall downtown, located in the revamped YMCA Building at 100 Street and 102A Avenue to be known as Williams Hall. The tentative opening date is fall 2019.

5. Will the new City Market continue to be a summer destination?

Although those aforementioned parking lots may make it easier for some to reach the market in its new location, parking doesn’t create a destination. Only time will tell if the City Market will be able to retain and attract a strong mix of vendors, create an atmosphere that encourages visitors to linger, and hopefully promotes some of the area’s nearby amenities as additional attractions. If not, those seeking better outdoor market experiences may end up heading to competitors like the St. Albert Farmers’ Market or the 124 Street Grand Market.

I’m hopeful that the City Market will make the most of this change, and I am looking forward to the long weekend in May to see what they have in store.