It’s always great to see locally owned restaurants grow and expand. In Edmonton, the trend over the past few years has been for restaurants to parlay their reputation into new concepts instead of replicating their initial successes – Tres Carnales/Rostizado, The Next Act/Meat/Pip, Elm Cafe/District/Little Brick, and of course, Corso 32/Bar Bricco/Uccellino are just some examples.

There’s another restaurant to add to this list – Jang is the brainchild from the folks behind Nudoru, the popular ramen joint in Old Strathcona (they had the distinction of being the first in Edmonton to make their own noodles). Although there are numerous establishments that serve Korean cuisine in the city, owner Eric Hui saw a gap in restaurants offering higher end Korean food. Chef Jamie Jang shared the same opinion, so when an ideal space became available on Jasper Avenue and 112 Street (formerly Soy and Pepper), Jang was born. It opened its doors in mid-October, and Mack, Emily and I were fortunate enough to attend a media preview of Jang last weekend. 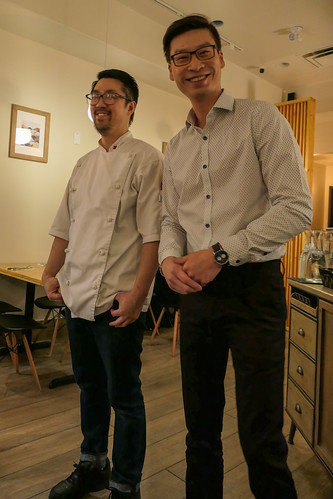 “Jang” means sauce in Korean, and their hope is to create a fusion of flavours through a combination of Korean, Japanese and Western sauces. We tried a variety of their small plates and mains meant to be shared.

We started with a refreshing apple kimchi, an inspired take on a Korean staple. I appreciated that the heat level was cut by the crisp fruit; it made for a nice accompaniment as we sipped our drinks. 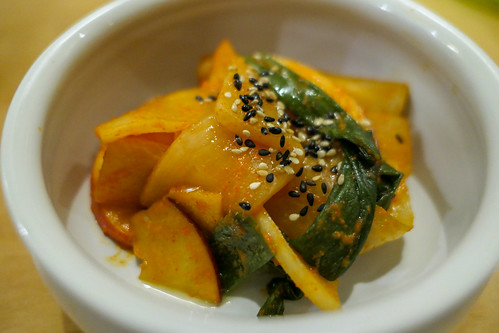 The salmon carpaccio, served with fennel, avocado, tomato, a Korean chili vinaigrette and cilantro mayo was very fresh. The fish was beautifully presented, and it was easy to see this dish as a representative of the type of polished plate Jang wants to be known for. 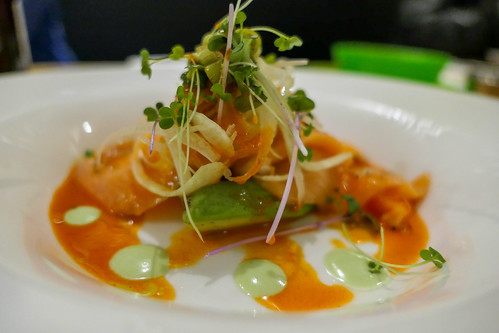 The kimchi croquette was one of our favourites that night – sweet potato mash, kimchi, and grana padano deep fried and served with a shichimi aioli. They nailed the textural contrast, with a crisp exterior and a smooth centre, punched up with the slightly spicy aioli on the side. 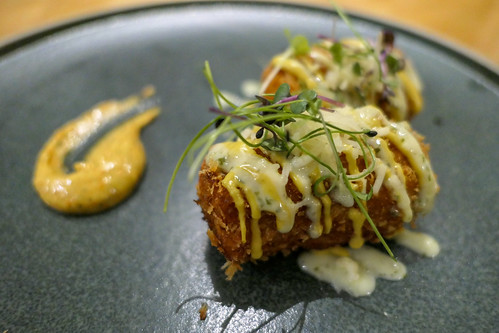 The sizzling hot ika featured calamari tossed in a Korean chili pesto, with a poached egg, mashed potatoes, and a black olive emulsion. It didn’t come together as a sum of its parts, although the squid was itself well cooked. 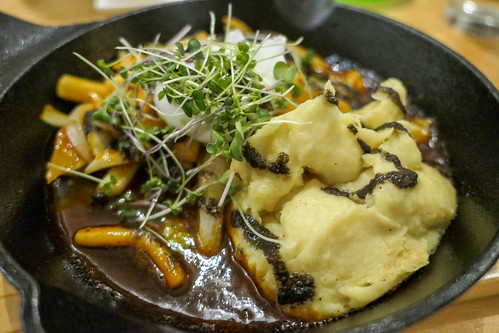 Onto the mains, the baked kimchi dome was a bit of a puzzle. It was presented with some fanfare, with the server cutting into the naan crust at the table to reveal pork loin and tofu in a kimchi tomato sauce. While the meat was quite tender, the flavours of the stew could have been further developed, and the group agreed that the naan bread was unnecessary. 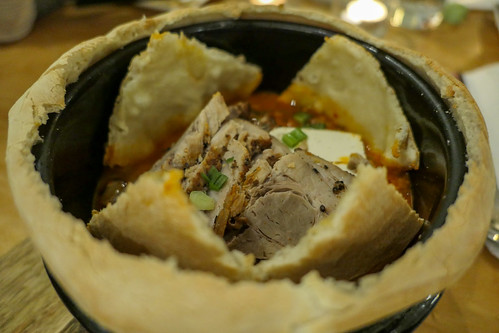 On the other hand, the beer-battered Korean fried chicken was definitely a crowd pleaser. Gojuchang and ganjang (soy sauce) dips were served alongside, but I preferred to enjoy the crispy, well-seasoned coating unadorned. The meat underneath was juicy and satisfying. The side of taro fries were an interesting choice, but they weren’t as crispy as I would have liked. For Jang’s grand opening from November 5-10, the KFC is on special for just $10 (regular $19). 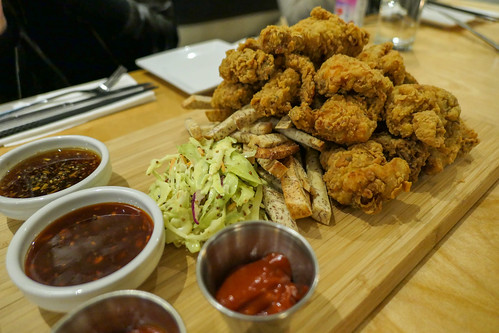 Jang’s gogi platter reminded our tablemate Cindy of the meat boards central to Rostizado, resplendent with different cuts and sauces. Here, teriyaki ribeye, galbi (Korean short ribs), pork belly and spicy pork shoulder is served with kimchi butter, ssamjeng dip and Asian chimichurri, alongside roasted potatoes, grilled vegetables, and some lettuce to create wraps. The ribeye was prepared well, with a good ratio of meat to fat. I also enjoyed the short ribs and their expected sweetness. If dining in a group, this would be a good way to sample a variety as we did. 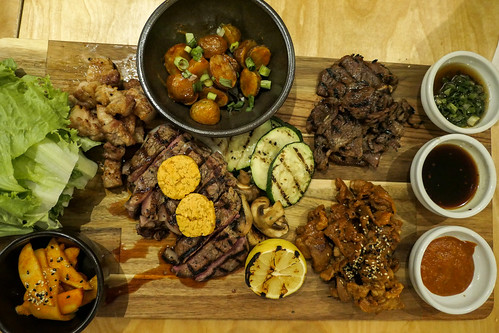 For the most part, Jang does meet its goal of serving more composed dishes with fusion flavours. As Edmonton’s food scene continues to develop, it’s encouraging to see restauranteurs take risks to bring their vision to life. Thanks to the team at Jang for their hospitality, and I wish them well in the weeks and months to come!

For more early perspectives on Jang, check out Eat with Sharon and YEG Cravings.