Every neighbourhood should have a go-to spot, a place for residents to gather. Piccolino was this focal point for many in Parkview and adjacent Crestwood, but when it was announced it would be replaced by a new Century Hospitality property, I’m sure some were wondering whether it could still be that place.

Rebel Food and Drink opened in mid-December just in time for the holiday rush. Mack and I had the chance to visit the restaurant last Thursday night. Walking in, we weren’t expecting quite the packed house that greeted us. All of the tables were full, with parties ranging from young families to older couples. We took up a pair of empty seats at the bar next to several solo diners, one of whom was a regular. Chef Tony Le indicated that the reception from residents has been very positive, even at this early stage.

I can’t speak to the interior changes as I had never set foot in Piccolino, but we were told the changes were drastic, with the installation of a bar and an expansion of the dining room. A second expansion will take place later this year when the travel agency next door relocates. The interior is cozy with dark accents, lined with a combination of booths and tables. I appreciated the open sightlines, which further inspires the feeling of community in the space.

The menu, as with all Century Hospitality locations, is broad and meant to appeal to a wide range of tastes. While those looking for more traditional dinner selections will be satisfied with classics like pot roast, grilled chicken, and steak and potatoes, I liked the playfulness with other choices like their Hangry Man TV Dinner (meatloaf, tater tots, roasted corn, buttered peas), a breakfast plate dubbed the “most important meal of the day” with eggs, toast, bacon, sausage, and tater tots, and a taco version of chicken and waffles. Mack is always up for having breakfast for dinner, so ordered the breakfast pizza ($22), while I chose the Rebel chz burger ($17).

Service was great during our visit; our bartender/server was a consistent and pleasant presence. Similarly, the kitchen was on top of everything that night, and despite the full house, the food kept flowing. We didn’t have to wait long for our plates.

Mack’s pizza (made with the same Italian "double zero" flour found in Parlour’s crusts) was appealing right from the start, studded with crispy prosciutto, crumbled sausage, tater tots, and of course, a sunny side up egg. It was a winner in his books, the thin but hearty crust holding up to the combination of toppings. 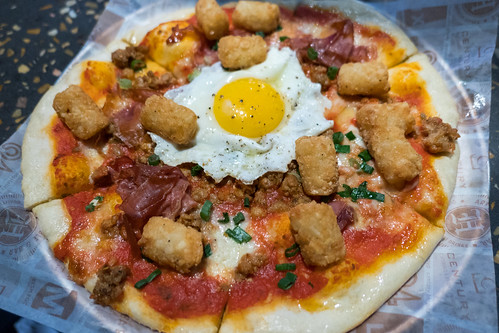 My house burger, featuring two beef patties, cheddar, caramelized onions, and "all the groceries" was a solid take on a classic. The beef was well seasoned, and I enjoyed the slight sweetness imparted by the brioche bun. The side of fries was also nicely cooked, crispy and lightly salted. 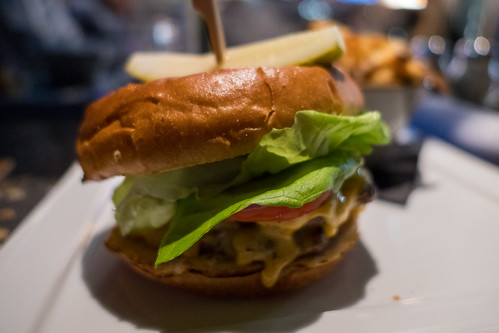 Tony generously treated us to dessert, knowing we were taken with the confetti cake. A few had passed by our seats throughout the night, drawing the attention of the room with an eye-catching sparkler. Continuing with the playful theme found in the mains, the cake is all about nostalgia – the four-layer cake is not only dressed in vanilla buttercream and sprinkles, but comes with a healthy dusting of Fruit Loops. It was sweet, indulgent, and everything your five year old self would want in a dessert. 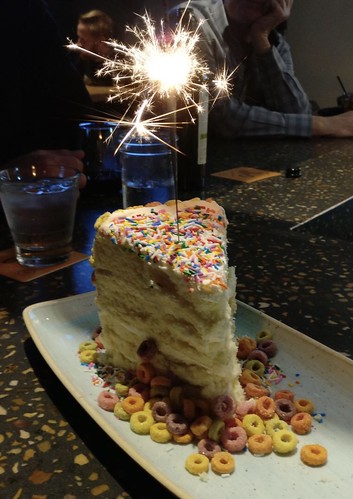 The brunch menu looks equally appealing (the hangover club has Mack’s name all over it), and yes, you can have that same confetti cake for breakfast, served with a glass of milk. Rebel Food and Drink is a fun addition to the restaurant scene, and hopefully one the neighbours will continue to embrace as a place to meet.