Ten years ago, before Mack and I moved downtown, I worked in Grandin in the building now known as The Ledgeview. The quaint and quiet neighbourhood was just far enough from the hustle and bustle of Jasper Avenue and the more commercial aspects of the core that it felt like its own cocoon. That said, the residential component and draw of Ezio Faraone Park always meant feet on the street, and I always felt safe heading home late in the day.

Now, our evening walks from 104 Street often take us through Grandin, on the multi-use trails or down into the valley. But while much has changed in the areas surrounding the neighbourhood, including new residential developments, additional infrastructure, and more retail outlets, Grandin itself has remained relatively untouched. With the exception of The Hendrix (a rental building), the static nature has preserved the tranquil feel of the community. This may be one of the reasons why one of its most pristine restaurant spaces has also been the most difficult to crack.

A decade back, The Copper Pot was a familiar, albeit understated fixture of the dining scene. The expansive windows overlooking the park ensured it had one of the best views a restaurant could offer, but the downside was its somewhat hidden location; it had to be sought out. They seemed to do fine accommodating the government and business lunch crowd, but evenings were tougher. I had my share of meals there, but the view always trumped the food. When they closed in 2012, I was hopeful a new tenant might bridge that gap. Successive tenants Antonio’s and The Phork came and went, and the space sat vacant for several years while the building itself was upgraded. To be successful, it seemed that the newcomer would have to become a destination – walk-up traffic is minimal, and while the actual distance to entertainment in the Ice or Arts Districts is not daunting, it’s just far enough to make the location a challenge.

Over the summer, it was announced that The Butternut Tree was due to open in that space in September. Helmed by Chef Scott Downey, originally from St. Albert but having gained experience in Vancouver, New York, and Denmark, would The Butternut Tree have the right formula to draw a crowd?

Mack and I were fortunate enough to be among those invited for a media preview last week. The interior has been completely overhauled; the room has been opened up, with views of Ezio Faraone Park on one side, and the open kitchen on the other. The muted grey and brown tones ensure the visual focus is external, and on the food at hand. We were seated with a few fellow food bloggers in a windowed private room with clear views of the Legislature. 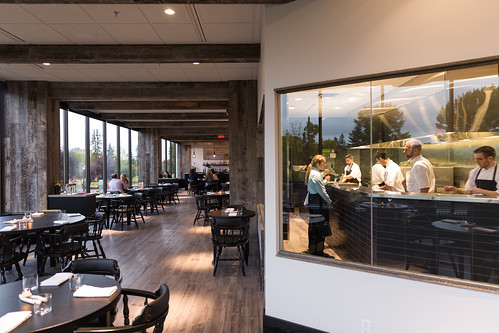 The website addresses the origin of the restaurant’s namesake, stemming from Chef Downey’s memory of a butternut tree in his grandmother’s backyard in New Brunswick. The tree symbolizes the variety of Canadian ingredients available, some of which are celebrated in Chef Downey’s pan-Canadian menu. 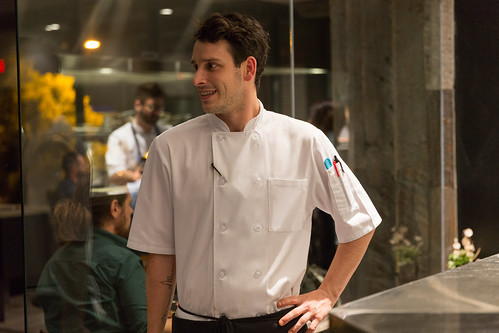 For now, The Butternut Tree is only open for dinner, but they are considering brunch and lunch once they’ve firmed up their systems. We were permitted to order an appetizer, entree, and dessert from the regular dinner menu. Given the size of our group, our table ended up trying most of the dishes, resulting in consensus favourites.

Mack’s broccoli appetizer ($16) was easily the most unique dish on the menu. I’m a sucker for charred broccoli, so I immediately knew this was right up my alley, while Mack was tempted by the pork belly. Complemented with a perfectly prepared soft boiled duck egg spectacularly coated in a leek ash, the silky yolk brought everything together. 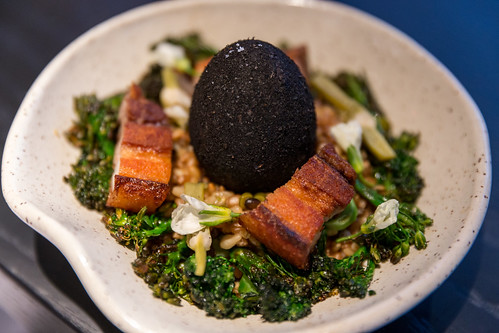 I chose the grilled bannock ($14), a vegetarian option featuring disks of flatbread with wild mushrooms, berries, winged kelp, and pumpkin seed. This was a much more shareable two-bite appetizer, with the kitchen showing a deft skill in extracting maximum flavour from the mushrooms. 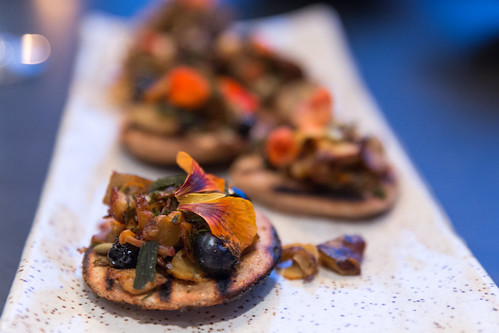 The Haida Gwaii halibut ($38) was pretty popular around the table. The substantial portion of fish was paired with a squash ragout, parsley onion pesto, braised leek, and lobster mushroom. The halibut was very well prepared, as again were the mushrooms. 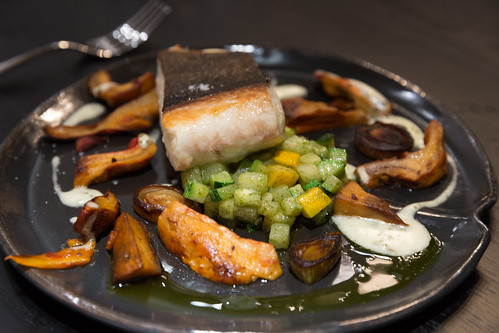 Mack’s Bentley bison duo ($44) was the most expensive item on the menu, but the kitchen ensured the protein was showcased well. The tenderloin was cooked to medium rare, while the shortrib was fork tender. The accompanying lentil, carrot, and cauliflower were fine, albeit inconspicuous plate mates. 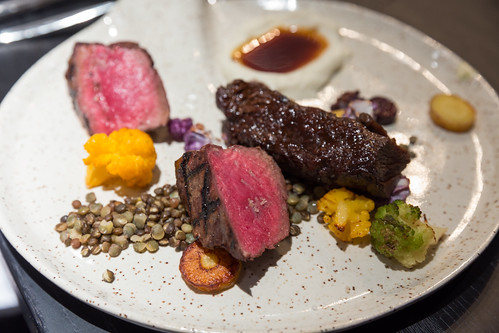 For dessert, the overwhelming favourite was the plum ($10), served with milk ice cream, honey meringue, and oat crumble. It was full of contrasting textures and comfort, and was light enough to not weigh the diner down. 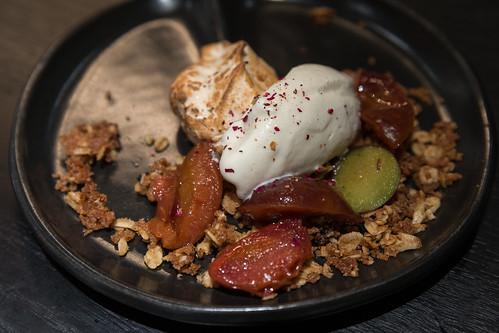 I ordered the ployes cake ($12), made from a buckwheat-based batter served up like a short stack of pancakes. It was topped with maple butter, Alberta Rose, and berries. The cake was very dense, and though I didn’t find it overly sweet, the richness meant a few bites were enough to satisfy me after the preceding dishes. 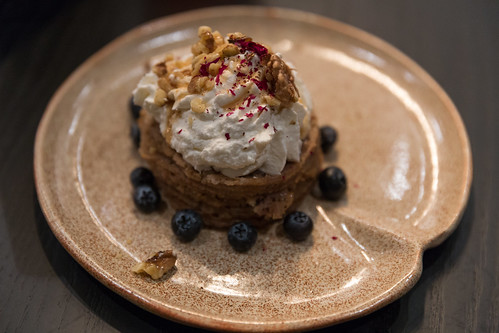 There is no doubt The Butternut Tree makes a great first impression – the panoramic views will translate well for those celebrating a special occasion, wooing business associates, or having a fine night out. The menu also features enough familiarity to keep a wide swath of diners of happy, but with a few surprises to interest more exploratory eaters. Still, only time will tell if a chef returning to his local roots will make a splash big enough to overcome the inherent challenges of the restaurant’s location.

I wish Chef Downey and his team the best of luck – thanks again to The Butternut Tree and Bonafide Media for organizing a great evening! For alternate perspectives on the evening, read Cindy and Crystal’s recaps.