When Mack and I started going to the farmers’ market regularly ten years ago, we became particularly conscious about where were sourcing our meat proteins. For us, the relationship we have with the vendors we buy from is as important as the conditions in which the animals are raised; as a result, we’ve even visited some of the farms we purchase from first hand.

That said, it’s not lost on me that much of the agriculture in this province is based on conventional farming methods. And while we have chosen to invest our food dollars based on what we value, I’m open to learning more about other farming practices. Two weeks ago, I had the privilege of attending a tour of a local conventional egg producer organized by Taste Alberta.

We started off with breakfast at the Glasshouse Bistro at St. Albert’s Enjoy Centre. It was a bright and sunny day, with the clear enclosure around the restaurant amplifying the beautiful conditions outside. The family-style meal featured eggs with a house-made hollandaise, bacon, sausage, and addictive spiced potatoes. 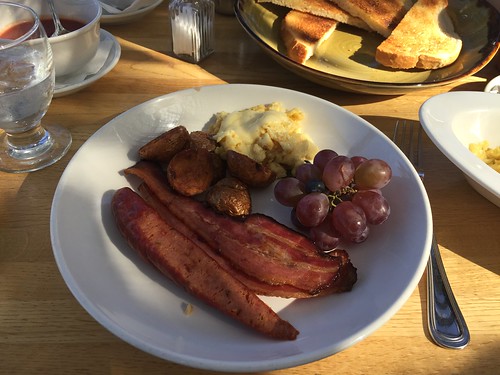 Our group of half a dozen then rode a bus about 30 minutes north west of St. Albert to the Morinville Hutterite Colony. The colony is made up of 120 people and occupies 6,000 acres. They are a mixed farm, with grain, livestock, and dairy rounding out operations.

The Colony’s egg farming division is extensive, holding a hen quota of 20,160. In 2013, they were named the Alberta Egg Producer of the Year by the Egg Farmers of Alberta (who represent more than 160 registered egg farmers in the province). On average, the colony produces 1400 dozen eggs per day, and sells them to eighty restaurants in the area including the Hotel Macdonald and Cora’s, and commercially in Edmonton at the Italian Centre and through Four Whistle Farms. I was surprised to learn that Hutterites produce between 80-85% of all eggs in Alberta. 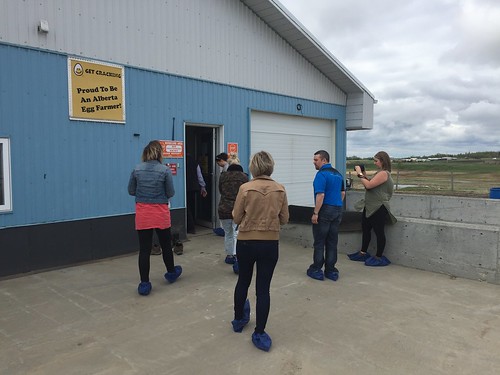 At the Morinville Colony

Paul Wurz, Morinville Colony’s Egg Manager, led the tour of the barn and the sorting facility. Though I have visited many farms in the past (albeit small operations by comparison), it was the first time I’ve been required to suit up for biosecurity reasons. With 10,000 hens housed in the single barn though, it’s easy to understand how an errant virus could quickly contaminate the entire flock, which would result in serious financial consequences for the farm. 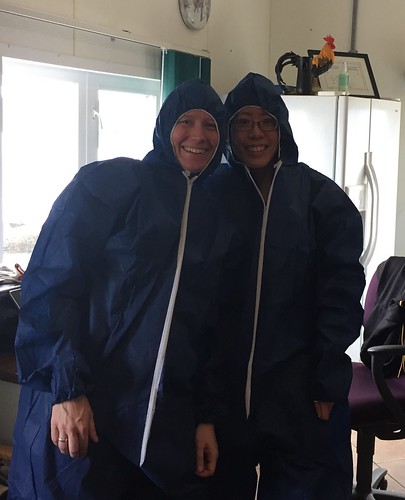 With Sharman in our suits

While we weren’t permitted to take photos inside the barn (we were told an accidental flash might disturb the hens), the following photo from the Egg Farmers of Alberta captures a conventional hen house, and is very similar to what we encountered that day.

As mentioned, the barn we toured housed 10,000 hens. The cages were stacked three high, with seven hens in each cage. Each hen is provided with 72 square inches of space. We were told that this type of hen housing is being phased out in favour of furnished or enriched housing, which features more space, nesting boxes, perches, scratch pads and dust baths. The Egg Farmers of Alberta states that by 2020, 32% of hen housing in the province will be furnished or free-run/free range.

One of the advantages to this system is undoubtedly the built-in automation. The hens are allocated feed (105g per bird, per day, a mix of grain and soy for protein), and eggs laid roll down onto a belt that cycles them into the sorting facility next door. Manure is collected on a different belt underneath the metal grate of the cages, and carried outside for composting every four days. This was one of the factors Paul was most proud of – his eggs never touch manure; “In my books, the healthiest eggs are from barns like this,” he said.

Eggs cycled from the barn

In this barn, all of the birds were 24 weeks old. The colony raises all its own pullets (chicks), and they are placed in the barn at 19 weeks when they start to lay eggs (90% lay an egg a day). They lay for one year, after which they are butchered, then replaced by a new flock.

Before I set foot in the barn, I wasn’t sure what to expect. I had heard stories of cramped living quarters, dirty conditions, and mottled birds, so what I saw was better than what I had anticipated. The birds were full-feathered, and apart from their obvious curiosity related to the visitors, they were relatively calm and quiet. In my opinion, the cages may be defined as humane, but it was hard to see so many birds in what appeared to be such a small space. In some ways, it was best summed up by a label that can be found at Save-On Foods, where they classify the different types of eggs available: “behaviours restricted”.

In the facility next door, the eggs travel on a conveyor belt to be cleaned, inspected, then sorted. The eggs are rinsed, removing any bacteria that may have been on the shell, as well as the protective barrier provided by the hen, necessitating their immediate refrigeration. 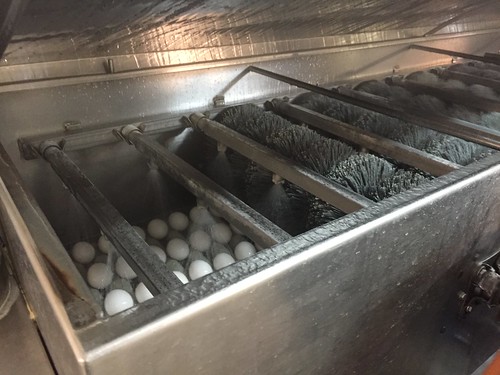 Next, the eggs are inspected for any blood spots, unusually large air pockets, or cracks using a light placed underneath the conveyor belt, one of the jobs still done by a person. Only 1% of eggs don’t pass this inspection for sale. 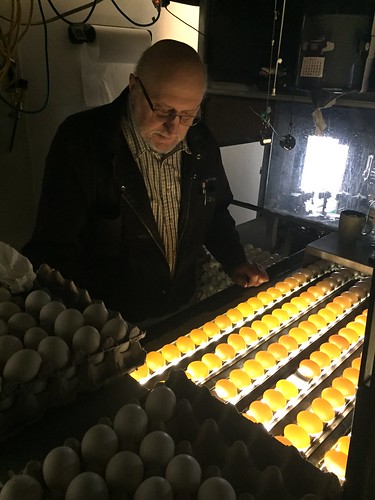 Lastly, the eggs are automatically sorted by weight from small through to jumbo sizes. The eggs are packed and boxed by another person. All told, the facility can be run by just three people due to the automation involved.

Paul provided us each with a carton of eggs to take home, and was obviously proud of their quality. Among the feedback he receives from the restaurants he supplies – “My eggs don’t run – you don’t have to chase them,” he says, referring to the firmness of the egg white. Interestingly, he ensures the feed mixture doesn’t colour the yolks beyond pale yellow (the inclusion of alfalfa or corn can darken the colour), even though many consumers now consider darker yolks to have more nutrients. Paul shared that when the yolks have been darker in colour, he has received complaints from some of his customers. 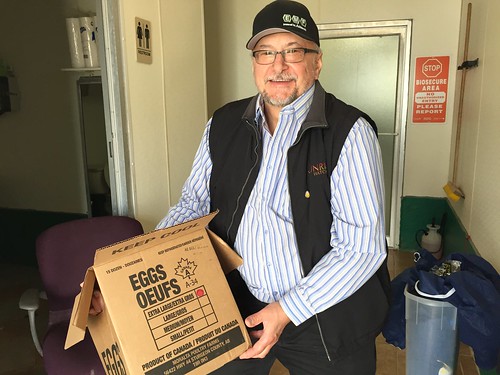 I appreciated how open Paul was to having visitors at the Colony. His transparency and willingness to answer our questions was a welcome change from what I thought we might encounter. Thanks to the Morinville Colony and Egg Farmers of Alberta for hosting us that morning, and to Taste Alberta for organizing a very informative tour.