For many years, consumers who wanted access to “home cooked” dishes but did not have the time to cook helped make meal assembly services like Simply Supper in Edmonton and Dinner Factory in St. Albert a success. But what about those looking to create dishes from scratch in their own kitchens, but without the time or will to grocery shop?

Meal preparation kits have grown in popularity in the States, eventually spreading to Eastern Canada, and in the last year or so, to Western Canada. The kits contain recipes and nearly all of the ingredients needed, pre-portioned, for meals that can typically be prepared in 15-30 minutes. In an age where we are increasingly time deprived and reliant on ordering goods online, grocery delivery with such pre-packaged convenience is a logical progression.

In Edmonton, services available include Chef’s Plate, Hello Fresh and Miss Fresh, but I wouldn’t be surprised if this list expands further this year. Our first meal kit experience was with Chef’s Plate – Mack’s brother Thom and Alicia are big proponents of Chef’s Plate, and gave us a gift certificate for Christmas.

I will admit that even before we placed an order, I was already biased against services like this – could the end justify the costs? Mack had to remind me that I am far from their target customer because I actually enjoy grocery shopping, prefer shopping local, and prioritize meal planning. Still, the gift certificate was an incentive to try it, so we took the plunge and selected two meals to start with in late January.

The full price of the order (not including $6 delivery fee) was $49.80, meaning each two-person serving rang up at $24.90. I happened upon an offer that reduced the charge by 50%, which made the two meals a much more palatable $24.90. Without the discount, it could escalate your food budget quickly. 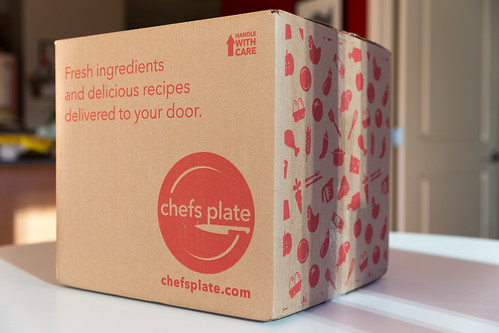 The order was dispatched from their Vancouver-based centre on a Thursday, and arrived as expected on the following day. We received an insulated box with ice packs (not dissimilar from what we received from SPUD) that would have easily kept the contents cool for hours. Unlike SPUD, however, the boxes and ice packs aren’t re-used – there isn’t currently any mechanism in place for Chef’s Plate to pick up perfectly good packaging. Sure, they encourage recycling of the materials, but that doesn’t discount the energy used to unnecessarily break down and re-make packaging. Thom and Alicia’s boxes have doubled as cat havens, but given many delivery recipients are repeat customers, I hope Chef’s Plate looks into this. 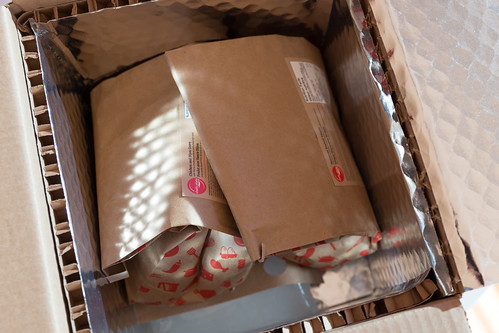 The produce and seasonings for each meal were grouped into brown bags, and the proteins were packed separately. Along with the food, we received full-colour recipe cards to accompany each meal. Each recipe contained enough detail so the meal could be replicated apart from Chef’s Plate (e.g., the seasoning packets were broken down into proportions and ingredients). The ingredients themselves were comparable in freshness to those picked up at a supermarket (I found it amusing that they felt the need to label the bag of tomatoes). 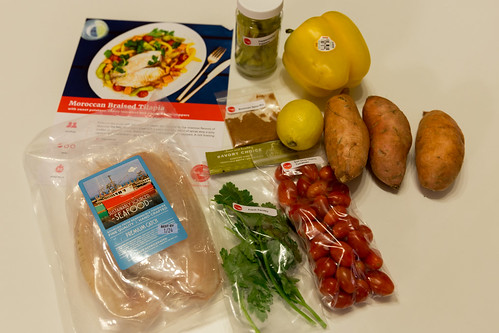 Ingredients for one 2-person meal

The Moroccan braised tilapia was a straightforward steamed fish meal, served with sweet potatoes, bell peppers, cherry tomatoes, and pepperoncini peppers. I did appreciate the seasoning; the flavours were something we hadn’t previously combined with fish. It was also my favourite type of dish for a weeknight: the one pot variety that made for an easy clean-up. 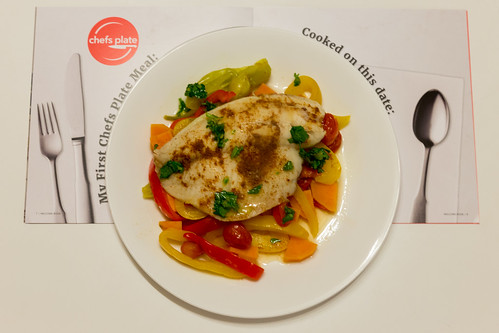 On the other hand, the second dish, a chicken with dijon gravy with thyme smashed potatoes and a baby kale salad, required a pot, pan, and a sheet tray. The final product was worth it, but the mess would have been better suited for the weekend. 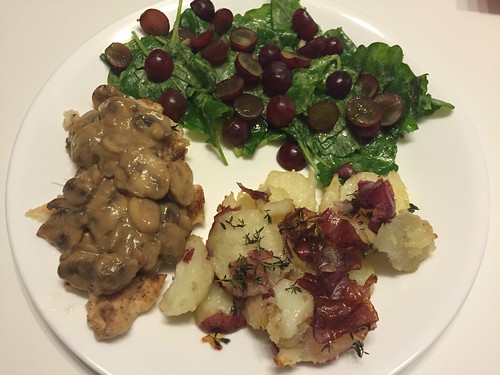 Both dishes included fairly generous portions – one of my concerns had been whether or not we would need to supplement the meal with other ingredients. That said, my usual meal planning builds in our need for lunches, so unless we had ordered the more expensive family plan, Chef’s Plate still required us to rely on our other large-batch meals to generate leftovers.

On the plus side, Chef’s Plate forced us to try new recipes. We had been craving something different, so it was refreshing to have new recipes essentially chosen for us, including everything we needed for those dishes.

That said, convenience does come at a cost, so it’d be hard for us to justify ongoing orders, especially since we prefer to do the bulk of our shopping at farmers’ markets. We’re more likely to be occasional subscribers, when we’re looking for something to change up our routine.