K-Days really couldn’t have asked for better weather to kick off the 10 day Edmonton summer mainstay. Mack and I joined the thousands of festival revelers on Saturday for our annual pilgrimage to the midway. Mack had accepted an offer from Northlands to visit the grounds as their guest, which included special passes to the TD South Stage and cash to eat our way through some of the new items. We invited my sister Felicia to join us, at least for the food portion of the afternoon. 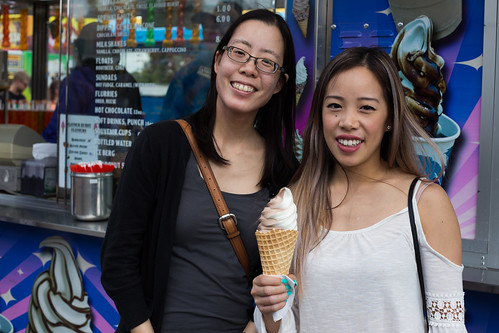 It was interesting to see a number of local food trucks among the mix of vendors, including Smokehouse BBQ and their sister truck Stuffed Gourmet Sausage, Cuisine on Wheels, and Native Delights. While we have our fill of food truck cuisine elsewhere, it is great to see more Edmonton-based vendors present.

Our food choices were ultimately guided by the new food flyer that can be picked up at information kiosks on site. They list all of the items that are new to the festival. Unlike previous years, no insects were harmed in the making of this list, so the shock value was minimized to items such as rainbow grilled cheese and Oreo fried rice.

Our favourite item that we sampled that day was actually also the winner of the new food award – the meatball sub on a stick. Pizza dough was woven in between three skewered meatballs, then broiled with cheese and seasoned. As midway fare goes, this was actually on the healthy side, given it wasn’t deep fried. The meatballs themselves were quite tasty, balanced out with just the right amount of dough and cheese. 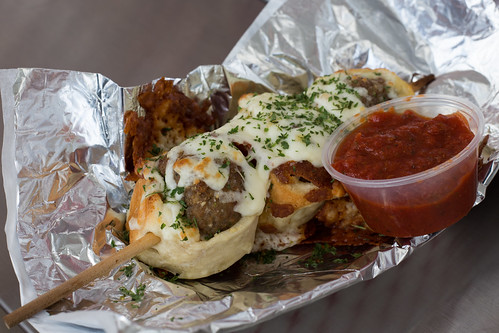 Meatball sub on a stick

The big pickle dog had been voted the runner up of the new food competition. Mack, being a corn dog aficionado, was quite excited to try this, as it was a marriage of two of his favourite things: pickles and corn dogs. Alas, it was just too hard to eat, as the pickle retained too much of its crunch, and the hot dog slid right out from the pickle’s empty core. He doesn’t recommend this one. 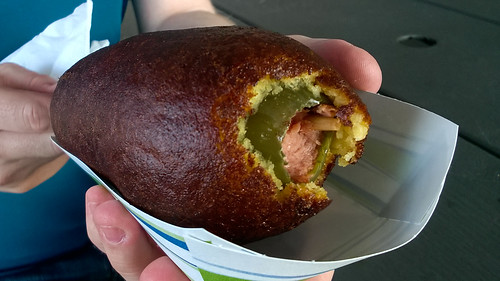 Continuing the "food on a stick" theme, Felicia tried the chicken waffle on a stick. It looked promising, with a crisp, made to order waffle exterior. But it contained chicken with little flavour, and unnecessary breading since the crunch was lost underneath the waffle batter. 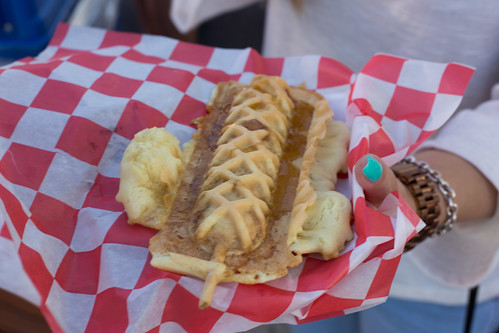 Chicken waffle on a stick

Perhaps our biggest disappointment was the mac ‘n cheese stuffed burger. The concept had much promise, but the execution needed work: the patty itself was overly charred, and the toppings were hastily assembled. We could barely eat the burger and derived no pleasure from doing so. 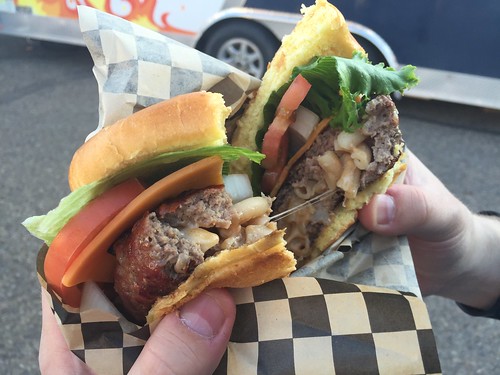 We were pleasantly surprised by the poutine perogies, which substituted deep fried perogies for potatoes. It was a healthy serving meant to be shared, with salty gravy and a generous amount of cheese. 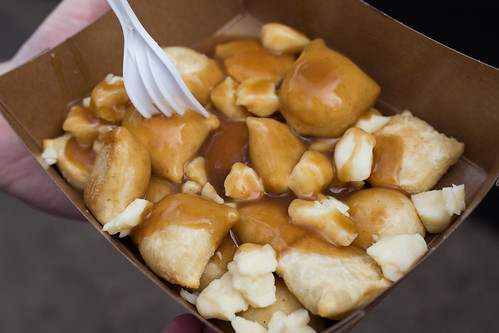 Of course, we had to indulge in mini donuts at K-Days as well, as much of a tradition for us as anything else. 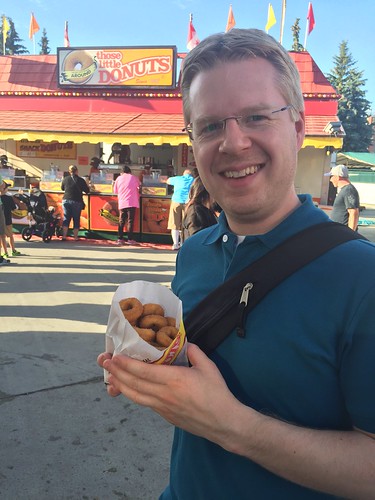 The best thing about K-Days is being able to partake in the variety of shows and activities in between food. Our favourite show was Canine Stars, featuring rescue dogs in a high-energy demonstration of agility. 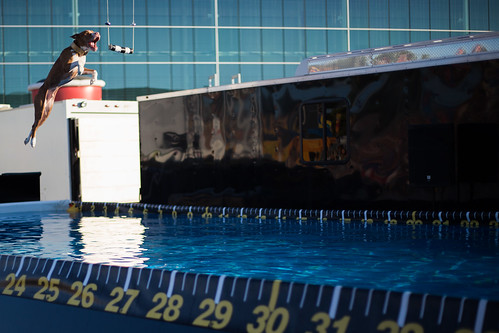 We also enjoyed the expanded Tech Life exhibit (which, on July 30-31, will host the first ever Canadian Drone Championships). In addition to the retro video game systems they’ve had in years past, they also included an extensive selection of board games. We opted to challenge Giant Jenga. 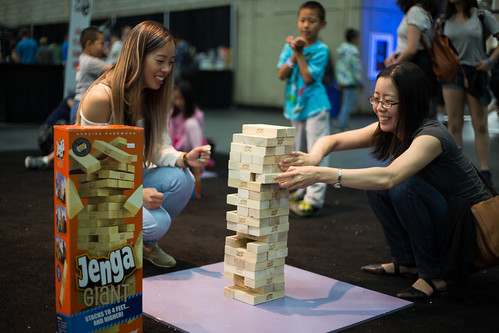 The main K Days music stage has typically been located right off the midway. But as an example of how the Northlands Vision 2020 could play out, organizers decided to relocate the stage to the infield of the race track. The result is a defined, enclosed area, which promoted an atmosphere more conducive to a proper show. The simple act of departing from the midway signaled the transition to a dedicated concert space. Mack had been given VIP passes for the TD Comfort Zone, which meant we could watch the musical act for the evening from the vantage of an elevated tent. 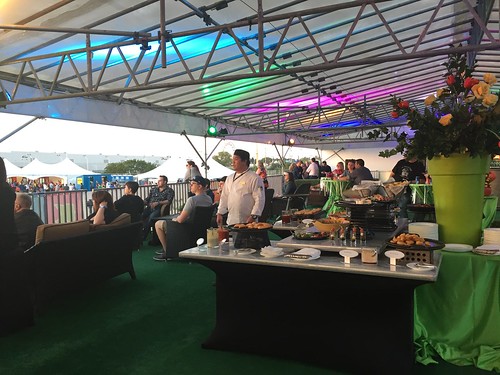 The tickets, which would have cost $100 (including gate admission to K-Days), includes access to a spread of appetizers and non-alcoholic beverages. The platform is licensed though, and most patrons took advantage of this. No doubt, the price enables exclusivity, and is a way for Northlands to generate additional revenue from an existing festival component. 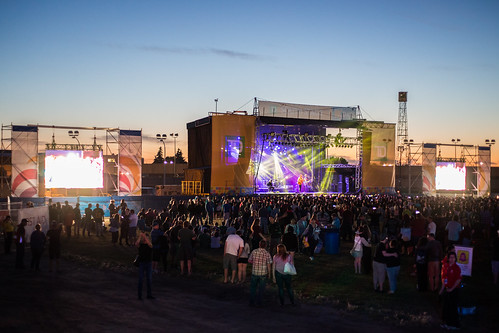 Matthew Good put on a great show, and played right up until the fireworks began. An unintentional benefit of the new stage location is the natural expansion of the fireworks viewing area. The west side of the race track is in close proximity to the launch site, so I’d recommend heading over there for an even better view of the light show. 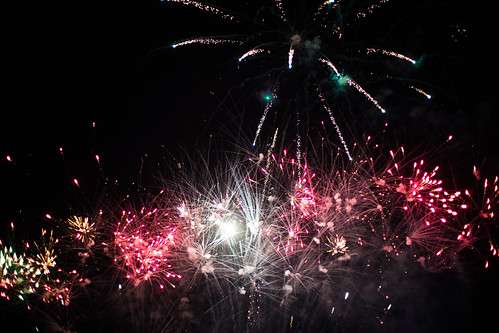 We finished our night with a bit more Bowler Roller, my amusement addiction. For the record – Sharon: 2, Mack: 0. 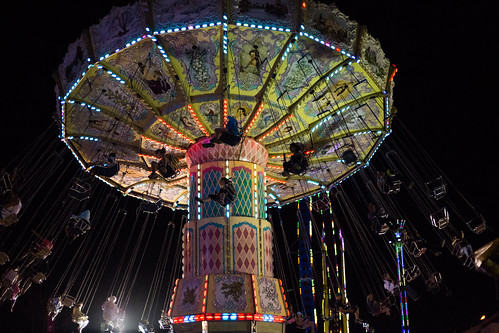 Thanks to Northlands for a great evening out to our summer tradition.