My sister Amanda moved back to Toronto in the fall, and I promised to visit her in the spring. I was finally able to keep that promise in April. It’s no secret I love visiting the city, and each trip allows us to discover (and in some cases, rediscover) our new favourite spaces, places and events. 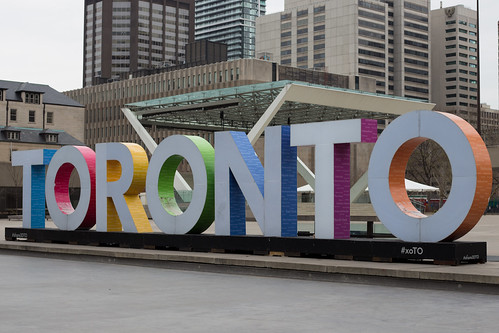 Many years ago, Amanda and I had complained our way through a covered-but-outdoors Toronto Underground Market at Evergreen Brick Works. I haven’t been back since then, but their weekly farmers’ market seemed like a great opportunity. 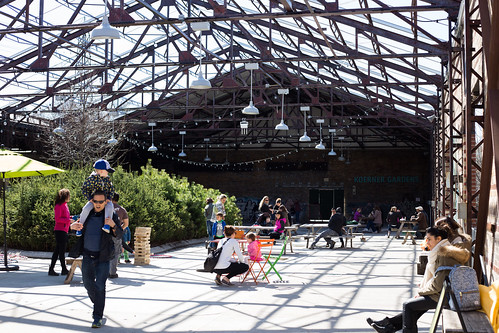 We probably shouldn’t have taken her boyfriend Jason’s vehicle, given the number of times we had to circle around, but it did make us wonder why anyone would drive there on a regular basis at all – it would incite road rage in most people. Inside, there weren’t as many produce vendors as we were expecting (recognizing that farmers are now down to their cellared products), and not one greenhouse producer. We did pick up some Best Baa sheep’s yogurt to try (not as tangy as the cow’s yogurt we’re used to), and refilled our supply of my favourite mustard, Kozlick’s. 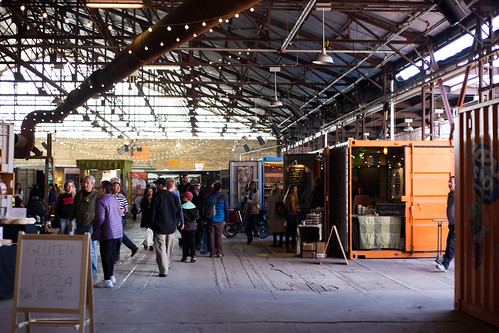 The covered part of Evergreen housed vendors in shipping containers (great idea, though it must have still been chilly for the vendors), and some food trucks. It was our chance to try Eva’s Chimney Cakes, a genius marriage of Hungarian cinnamon-sugar doughnuts (available one year at K-Days) and soft serve. 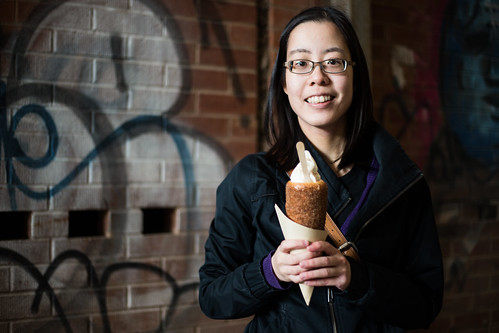 With my doughnut cone

The "cone" had to be cooled in order to not immediately liquefy the ice cream, and lost its chewy doughnut quality in the process. I did enjoy the mix-in of apple preserves though.

The Gladstone Hotel is considered (along with The Drake Hotel) the anchor of West Queen West. They host a monthly flea market curated with unique, independent vendors. 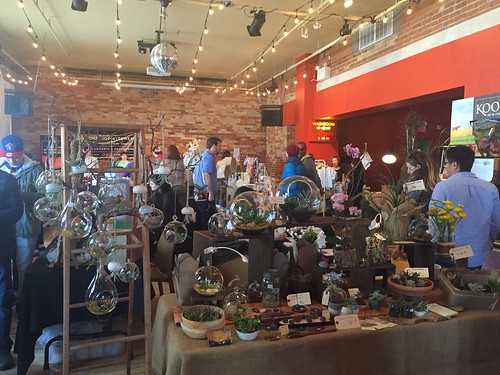 Amanda and Jason sampled some sustainable pasta sauce (with mealworms blended in), while Mack and I picked up some Toronto Bee Rescue honey, made from undesired hives rescued from homes or construction projects. Best of all, there was no entrance fee to the market.

Mack had never been to a television taping in Toronto, but was still a good sport when he agreed to accompany me to an episode of The Social. It’s not something I watch regularly, but on and off if I happen to be home during the day. Still, it’s always interesting to see how they produce the show behind the scenes (set changes, cues, etc.). Mack’s highlight was getting a high-five from actress Arielle Kebbel, who was the guest host that day. 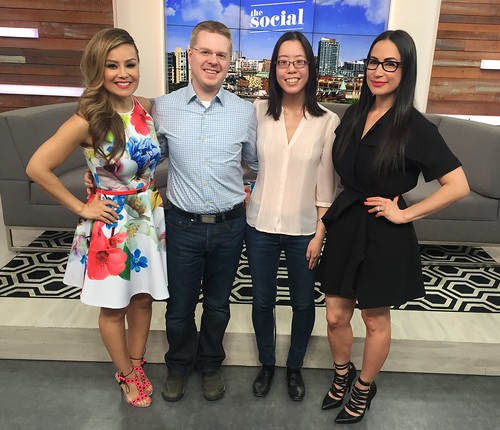 With The Social hosts Melissa Grelo and Cynthia Loyst

I stumbled upon the Battle Sports website after learning about their Rage Room on a segment on The Social. They were featuring 50% off their archery dodgeball, and Amanda and Jason were game, so we tried it. 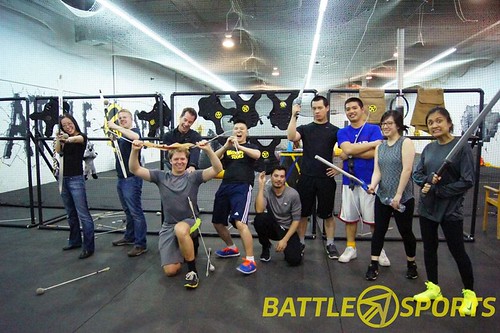 In hindsight, even an hour in the arena wasn’t a good idea for our out-of-shape bodies, as we were not used to all of the crouching and quick movements required of us to stay in the game. At any rate, this sport required the use of foam arrows and axes to fell opponents, and between the adrenaline-inducing music and some overly aggressive participants, it was much more stressful than I thought it would be. While I enjoyed the actual archery, I could have done without the format.

I convinced Amanda to join us for the New Urbanism Film Festival, in its second year. It was a screening of a collection of North American short films, ranging in topic from the blight of raised freeways to the failure of pedestrian malls. As expected, some films were more engaging than others, but I would have appreciated a more localized context following the screening. A panel discussion about ideas as they related to Toronto would have been fascinating.

Mack hadn’t been to a live Blue Jays game before, so Amanda made sure that was on our agenda. 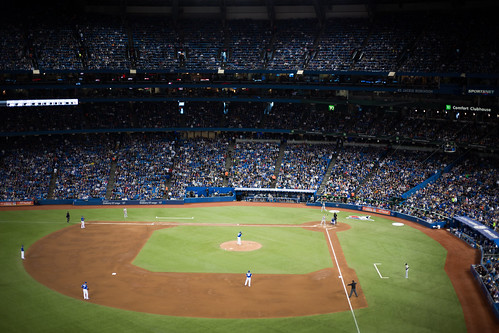 Our view at Rogers Centre

The tickets were so reasonably priced ($26), and there was even a giveaway that day – Josh Donaldson bobbleheads. It was great to be in a packed house (46,000+), much different than the last game I attended. And even better, the Jays beat the White Sox, 6-2! 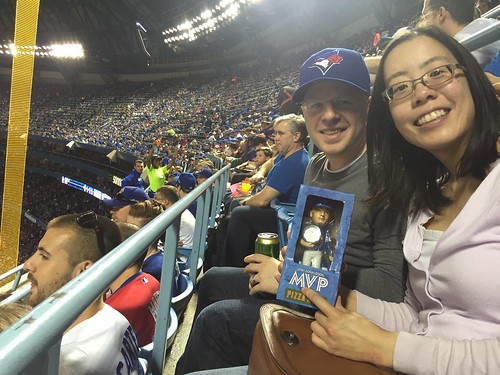 With our Bringer of Rain bobblehead

Before our date with Real Sports (a tradition whenever I’m in Toronto), we had the chance to visit Jurassic Park outside the Air Canada Centre before Game 4 during their series with the Pacers. 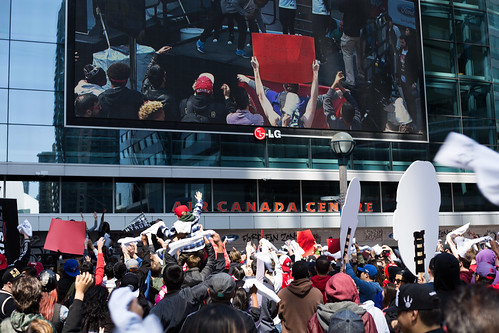 It wasn’t as packed as we expected (we learned later that the crowd is smaller for away games), but there was great energy in the square, with a live DJ, a big screen, and alcohol available. 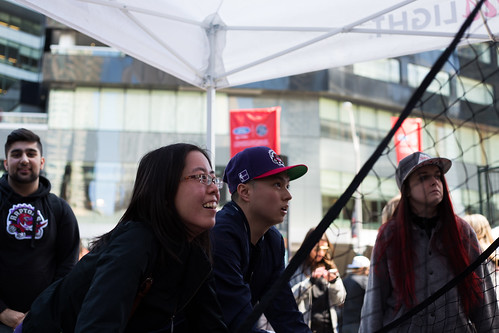 Ready to beat Jason one on one

I know there are plans for something similar in Ice District’s winter plaza (if the Oilers ever get to the playoffs), so it’ll be interesting to see how an Edmonton version of Jurassic Park would play out. And yes, I’m still keeping my fingers crossed for an Edmonton branch of Real Sports in the District. 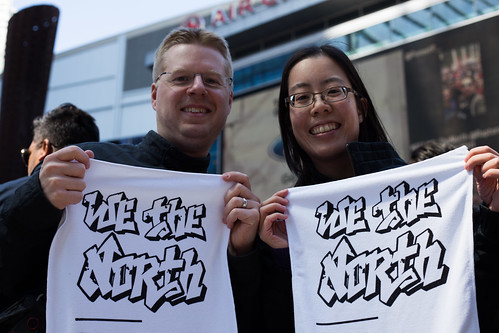 I’ll be back with a food-centric post later this week.