Pampa just celebrated their fifth anniversary in Edmonton, so it’s safe to say rodizio-style dining is here to stay. While it was never a surprise that a meat-centric restaurant would be a success in the city, I know I did wonder how much repeat business they could garner, given the single-meal extravagance at its core. Even Mack and I, who are far from being vegetarian, have found ourselves adopting meatless meals in the wake of visits to Pampa. 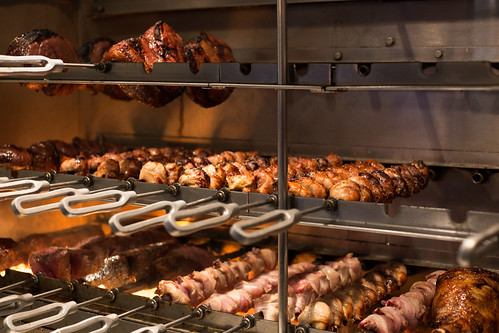 The Grill at Pampa

At any rate, meat lovers will rejoice with the return of Pampa’s second annual Bacon Feast. An enhancement to their regular menu, $14.95 on top of the $49.95 per person cost grants diners access to an additional two types of bacon-wrapped meat as well as a bacon-infused dessert. 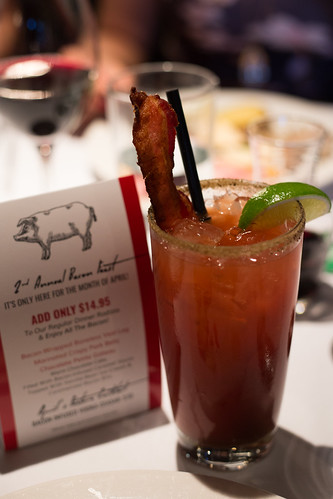 To give it a try, Linda convened several members of the local food community for a complimentary tasting, and Mack and I were fortunate enough to be included. It confirmed again the fact that Pampa is more fun when enjoyed with a large party. The theatrical style of dining, involving servers who rotate through the room with spears of meat for table side carving extends to its drink menu as well. This was the first time we experienced the heightened pour of Licor 43, a spirit crafted with a combination of 43 herbs and spices. The server stood atop a step stool and successfully filled a shot glass on the table from above. You can bet this commanded the attention of surrounding groups. 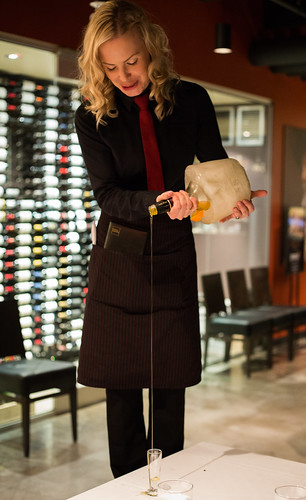 Part of the fun of Pampa is cycling through the ten (or in our case, twelve) different cuts of beef, chicken, lamb and pork to find your favourite . Our fellow diner Sharman had a great tip to minimize the gluttony of this process – Mack and I shared what was dubbed a "meat plate", so we could more easily share tastes of the meat offerings without filling up on them right away. She also pointed us to some of the dipping sauces available at the salad bar.

Speaking of the salad bar, there were a number of hot entrees to choose from that I didn’t recall from previous visits. My favourite was a deeply flavoured black bean stew that doubled as another sauce option.

After sampling all of the cuts, Mack returned to the medium rare rump steak a few times. I enjoyed the bacon-enhanced meat – including the bacon-wrapped chicken on the regular rotation, but also the bacon-wrapped boneless veal leg on the feature menu. The other Bacon Feast option of the marinated crispy pork belly, with its luscious layer of fat, was also a crowd favourite. 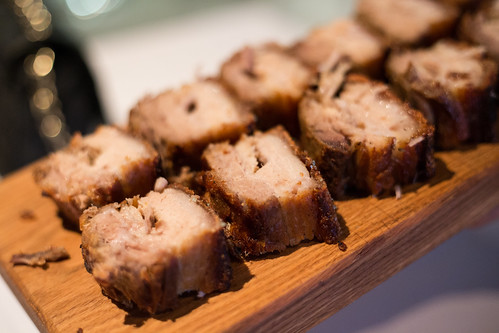 The Bacon Feast dessert was a warm chocolate cake with bacon-infused caramel, vanilla bean ice cream and caramalized bacon bits. The cake was well-made, rich and dense, but the bacon seemed like an afterthought instead of a critical component. 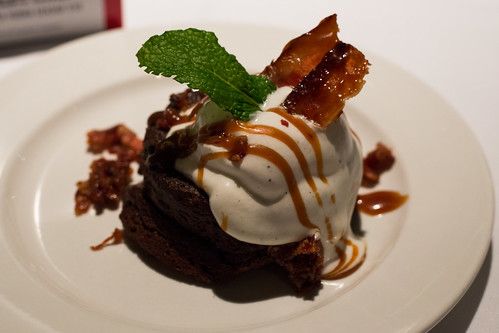 The $75 per person price tag is difficult to account for based on food alone, but then again, dining out is never exclusive to consumables. The service accounts for much of the value as well, and as in previous visits, was again commendable. Our server was game for the table’s shenanigans, and made the evening light and fun. 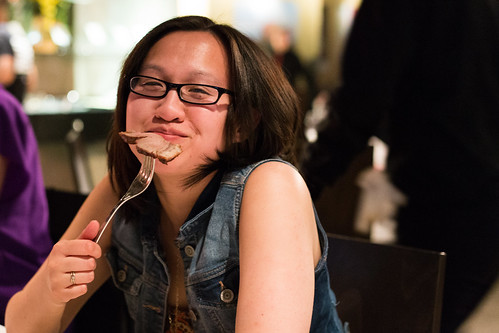 Linda in a meat coma

For those seeking more intimate knowledge of Pampa, they will be offering eight person 3 hour classes starting in April. They will share "trade secrets" of grilling with charcoal, and hands-on instruction of meat-stuffed bread, Feijoada (the aforementioned black bean stew) and guava cheesecake. The cost is $119 per person – call Pampa to book a spot.

Thanks to Linda for the invitation, and to Pampa for hosting us! Bacon Feast runs for the month of April. Check out Linda and Sharman’s recaps about our meal as well.

One thought on “Get Your Bacon On: Bacon Feast at Pampa”