On July 12, 2015, Mack and I were guests of the second annual Grand Taste Tour, a partnership between the 124 Grand Market and Taste Alberta.

The Grand Taste Tours began in 2014 and seek to showcase some of the great local producers we are fortunate to have in this province, and to enjoy some of their bounty as prepared by a talented local chef.

In our case, Mack and I joined Phil and Robyn on the "bee bus", meaning that we would be visiting an apiary to start. Our counterparts on the "dairy bus" headed to the Breevliet Dairy Farm first, after which both groups would meet up at the second and final stops.

We learned that the 2014 Grand Taste Tour was much different, as it was self-guided, and participants had to reach the participating farms on their own. Although some might appreciate the choice and freedom of a choose-your-own-adventure tour, we appreciated the fact that all logistics of transportation and food taken care of this time around.

It took the bus over an hour to reach our first stop, Wolf Willow Honey. Their products can be found on the shelves at Duchess Provisions, but for the most part, Wolf Willow prefers to sell their honey direct to consumers from the farm or at the Camrose Farmers’ Market. 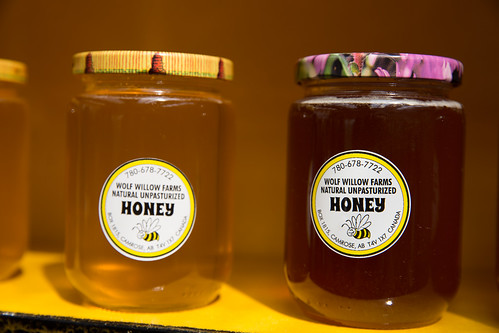 Doug Chalmers shared that Wolf Willow has 400 hives (with 50-80,000 bees making up each hive). He described the surrounding area as a “bee haven”, with more than 200 perennials available to their bees. That said, he does liken the collapse of bee colonies to the changing landscape after the second World War, linked to the decrease in food sources and the increase in pesticide use. 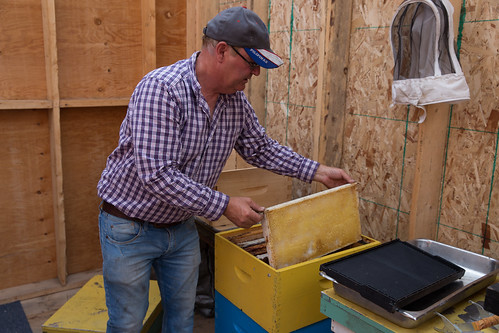 Using burlap smoke to sedate the bees, the beekeeper was able to pull up a frame for us to see. 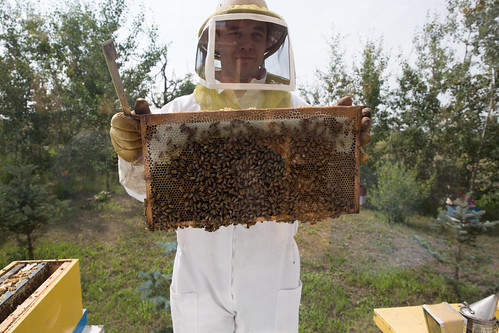 The bees were busy working away – did you know that a single bee makes just 1/12 of a teaspoon of honey over its lifetime? 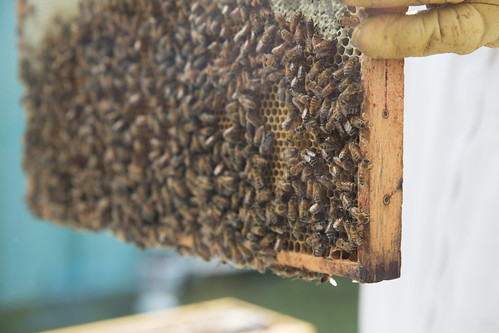 We also had the chance to sample some of their honey products, which included light clover, dark clover, dandelion, creamed buckwheat and an end-of-season 100 flower blend. Mack and I would have appreciated more of a guided tasting, but then again, we’ve been spoiled with superb honey education sessions led by Patty Milligan. 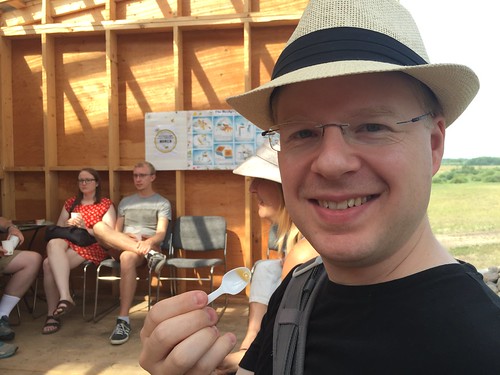 It was then on to Tofield Packers, a small abattoir used by Irvings Farm Fresh, among other local producers. 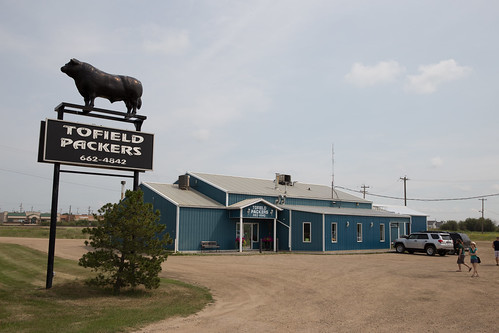 They are committed to public education, often opening their doors to 4H Clubs, so it wasn’t the first time they’ve hosted external groups. Owner Dale Erickson was our no-nonsense guide, and though he was responsive to questions asked, a more thorough explanation of the process up front would have been ideal. 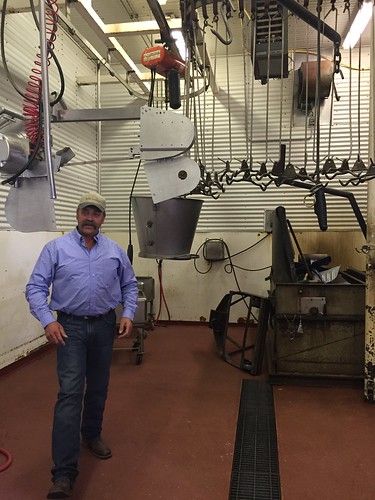 Dale Erickson on the kill floor

We did learn that they process pigs, cows, sheep, goat, bison, elk, ostrich and alpaca. While they have processed game in the past, they shy away from it because the animals are typically very dirty. On a good day, the plant can get through 7 animals.

Dale led us through the various coolers in the facility, including the wet room, where the animals are left to drain of blood and other fluids, and then the aging room, where sides are hung for anywhere from 14 to 21 days. 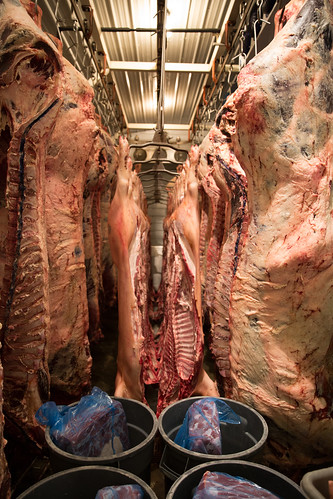 Tofield Packers also purchases sides of animals to process into hams, sausages and other cuts of meat which they sell out of their retail shop.

An abattoir is something every meat eater should see, to appreciate the end of a life that has travelled from a farm to your table. Tofield Packers is a great example of a family-owned facility that works with small farmers to put forth good quality products.

Before heading to our final stop, our group congregated in the parking lot to enjoy a snack. Given it was a tour sponsored by Taste Alberta, the big box store granola bars and watermelon was unexpected and ill-fitting. Hopefully snacks better aligned with the tour can be arranged next year.

Mack and I were most looking forward to the visit to Irvings Farm Fresh. We’ve been buying pork from Alan and Nicola Irving from the City Market, Old Strathcona and Salisbury Farmers’ Markets for years, and had always meant to stop by the farm to see where their pigs are raised. 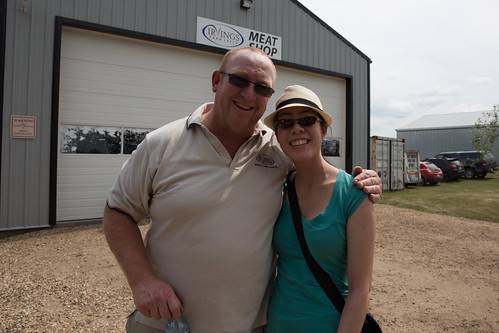 We finally had that chance, and we weren’t disappointed. The farm occupies a total of 80 acres, and this year, for the first time, the Irvings are growing their own grain for feed. The barley was surprisingly green, but the grass in an adjacent field was incredibly brittle under our feet. 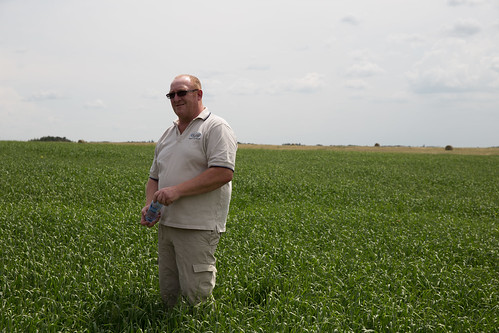 In the barley field

A few years ago, when Alan and Nicola were deciding on how to expand their operations, they had a choice to make – they couldn’t do it all on their own, and had to choose between outsourcing their breeding or their product line. They decided the latter was more important, and with a facility built to process all cuts on-site, they are able to guarantee their products are free from wheat, dairy, eggs, nuts, soy and MSG.

As a result, their Berkshire pigs are brought to them at 2-3 months. Irvings raises them until they’re between 6-7 months, or approximately 250 pounds. Beyond that, and the ratio of fat to meat becomes unwieldy. 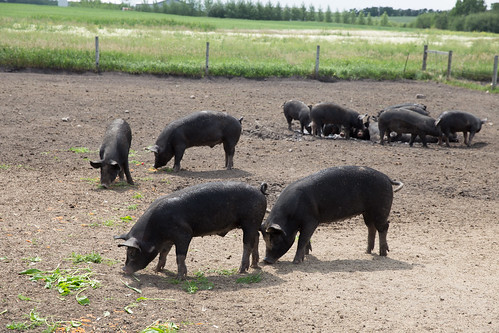 The Irvings believe that pigs should live as naturally as possible, so provide their animals with an environment where they have the freedom to move, dig, root, sleep and eat. They self-regulate, and on that warm afternoon, most of them had sought shade to keep cool (pigs don’t sweat). That week, the farm had about 70 pigs. 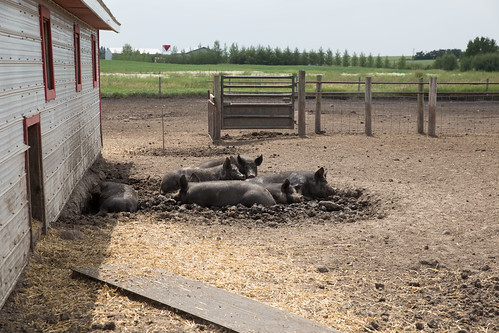 Before lunch, we had the privilege of observing a butchery demonstration by Elyse Chatterton. We learned that the pigs are killed at Tofield Packers, then brought back as sides to the Irvings facility (she even pulled out the bullet from the skull of the pig!). 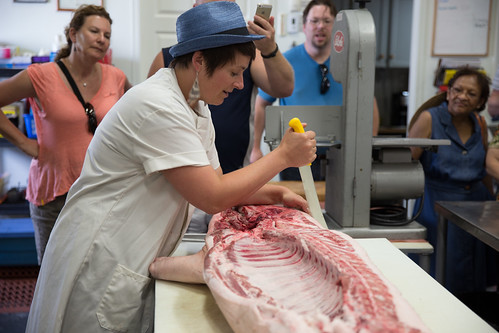 Trained in England, Elyse learned how to do everything by hand, eschewing the use of even a band saw for cuts through bone. As a retail butcher, Elyse loves the process of transforming a “beast” into attractive cuts of meats that catch a customer’s eye. She skillfully carved up several shoulder roasts (her favourite cut), and indicated that she could dispatch the entire side in one hour. 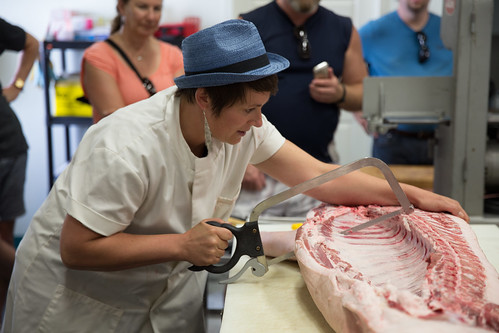 Her sense of humour was evident throughout the demo; for instance, some have questioned whether she is able to do everything a male butcher can do. Her answer: she isn’t able to go into the men’s washroom.

Then it was time for lunch, picturesque communal tables set up beneath several trees, adjacent to a makeshift outdoor kitchen. Chef Daniel Costa (of Corso 32 and Bar Bricco fame) and his team certainly had to work in an untested environment, but in spite of this, managed to create a memorable meal that celebrated the flavours of summer. 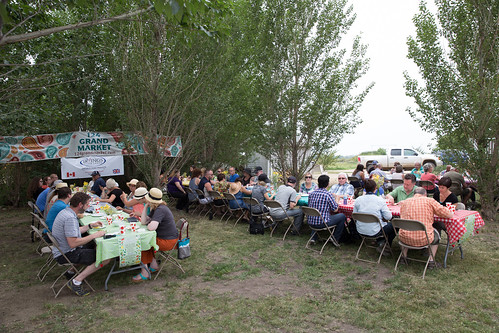 A plate of snappy, raw vegetables from Riverbend Gardens reminded us that sometimes, simple is best. It was followed by grilled Bonjour Bakery crostini topped by the most luxurious Fairwinds Farm goat ricotta and fresh spring pea and mint spread. 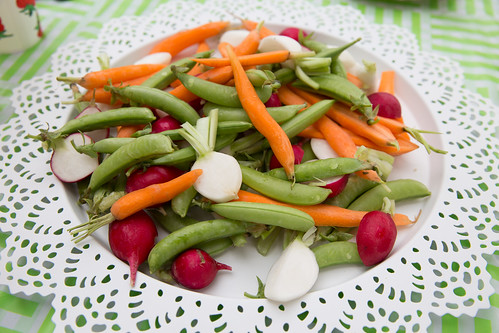 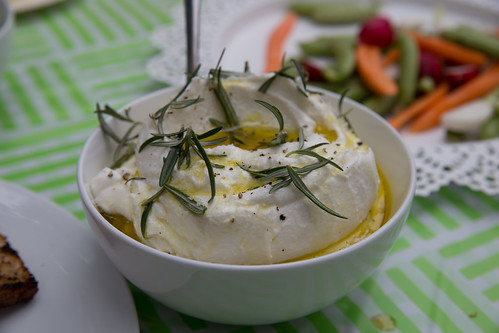 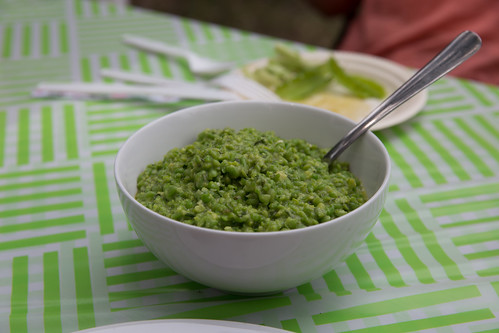 We were spoiled with platters of porchetta and panzanella made with tomatoes and cucumber from Gull Valley Greenhouses. 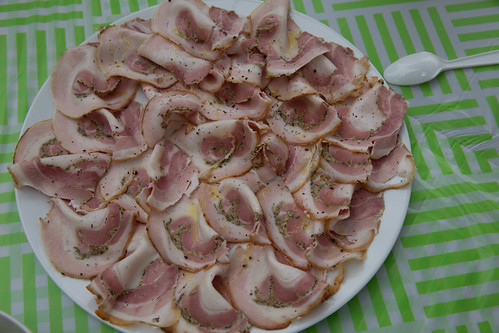 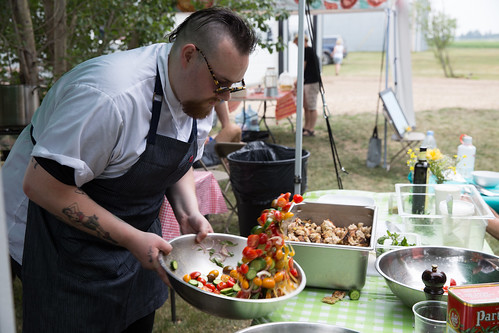 My favourite dish was the spring onion, pea shoot and whey risotto. Given risotto is difficult to make under regular circumstances, it was an even bigger feat on this stage. The whey imbued a creaminess that had me going back for thirds. 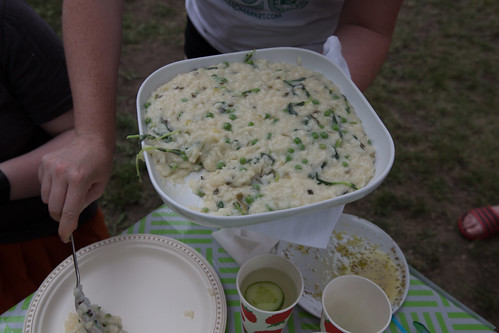 Grilled Irvings pork loin capped off the main course. The meat was overdone for my taste, but to be honest, I’d filled up on the preceding dishes. 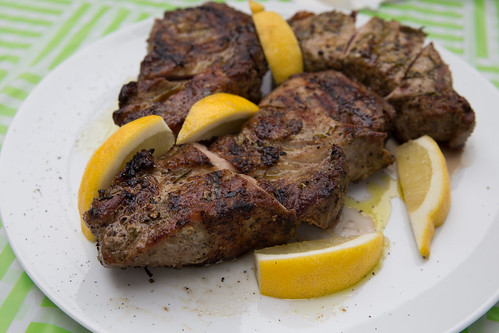 But we weren’t done yet – generous chunks of two year old Parmesan, drizzled with the 100 flower blend of Wolf Willow Honey, followed suit. The finale was a silky panna cotta with honey, grappa and berries. 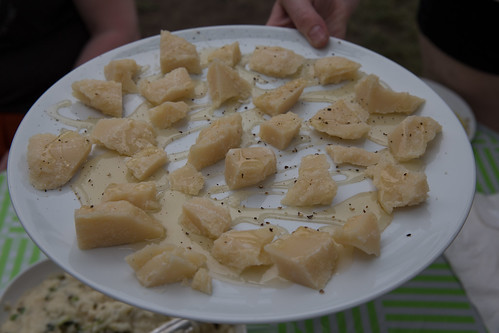 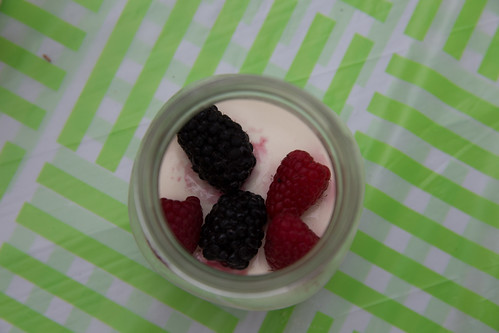 I’m certain that had the menu been advertised alongside ticket sales, the Grand Taste Tour would have been sold out; a similar meal at Corso 32 would have easily cost the equivalent of the $90 ticket price. Next year, organizer Kirsta Franke has already secured the chefs from North 53 for the lunch portion; if the cost of the tour holds steady, the all-inclusive nature of the event and the high quality of the food should sell itself. 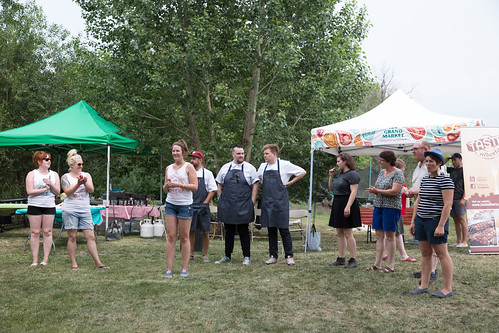 Kudos to the team behind the day

If the tour of Irvings Farm Fresh piqued your interest, you’re in luck – Alan and Nicola are participating in Open Farm Days on August 23, 2015, from 11am-4pm. Visit with the pigs, tour the meat shop, and enjoy a “simply porky lunch”.

Thanks again to Gastropost, Taste Alberta and the 124 Grand Market for inviting us, and congratulations to the organizers for a second successful tour. I look forward to seeing what’s on the agenda for next year!

Check out Mack and Linda’s recaps of the events, too!