Mack and I rarely get out for brunch in Edmonton. Weekends are an opportunity for us to sleep in, but more than that, we find there are only a handful of places in the city that are worth waking up for. In this instance, Calgary has us beat – their brunch culture is far more dynamic, offering variety to spare.

On Saturday morning, after dropping off Mack’s Mom at the airport, it seemed prudent to take advantage of the fact that we were already out and about. After stopping at the nearby Old Strathcona Farmers’ Market, we headed over to Meat. The restaurant just started offering brunch on weekends from 11am-2pm earlier this month, so it wasn’t a surprise that the crowd was tame; it’s still a well-kept secret. 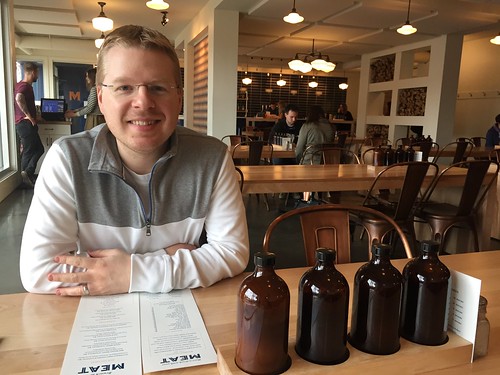 In some ways, Meat was made to host brunch. Their expansive windows allow in ample natural light, and also double as a vantage point for the bustling street outside – people watching over coffee isn’t a bad way to start the weekend. Lastly, their large communal tables make Meat a natural meeting place for large groups gathering over brunch – something not necessarily seamless in other establishments.

The menu is straightforward – 7 breakfast dishes, 3 sandwiches and the option to add booze to your coffee. Most of the dishes incorporate their smokehouse staples – buttermilk fried chicken & flapjacks, for instance, or housemade Southern grits with your choice of brisket or pulled pork. Mack selected the beef brisket benny ($15), while I couldn’t resist the biscuits & gravy ($13).

The kitchen was right on top of things, as our dishes arrived in no time. Mack’s benny was built on a buttermilk biscuit, topped with brisket, caramelized onions, a perfectly soft poached egg and housemade hollandaise. He liked the fact that the usual English muffin had been replaced with a flaky biscuit, and did especially enjoy his crispy, indulgent hash brown. 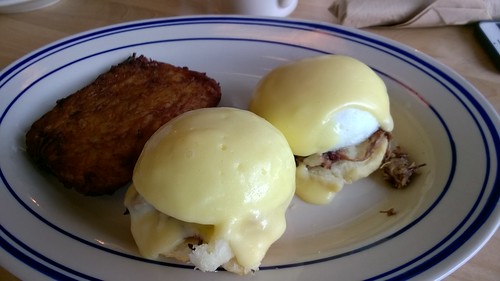 My biscuits & gravy weren’t advertised as anything else, and its components were tasty. The biscuits were definitely the highlight, and would have been worthy of unadorned consumption. The sausage gravy wasn’t overly studded with meat as I’ve encountered before, and because of that, I think there could have been more to the dish. Canteen’s version adds hash browns and sausage patties, but what makes Meat unique is their namesake. As they work through enhancing their brunch offerings, it would be great to see an “add on” section on the menu, where diners could not only add a poached egg on top of their biscuits & gravy, but also some pulled pork or brisket. A fellow diner commented on how her request of pulled pork on top of the smoked apple and cheddar flapjacks is what made them sing. Or, how about a side of fried chicken? Sure. An extra biscuit? Why yes, please! 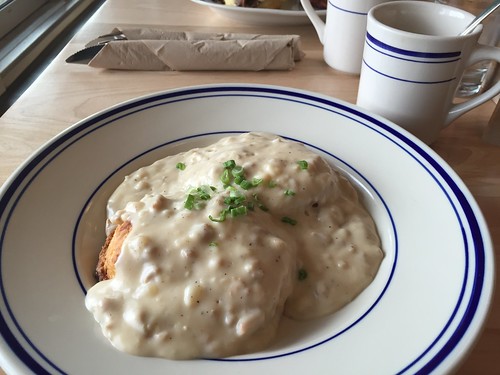 That said, it’s still early days in Meat’s brunch service. They have a great foundation – service was excellent, as always – and the food did convince us that waking up some weekends could yield some rewards. We’re looking forward to returning again on an early bird inspired weekend.