The whirlwind didn’t stop on our last day at Christmas in November. Mack and I were atypical early risers that morning on the promise of a behind-the-scenes kitchen tour. And even when we discovered that we had been misinformed (no tour had been scheduled on the final day), like dialing 55 for any other need, we were soon met by one of the chefs to make it happen regardless. 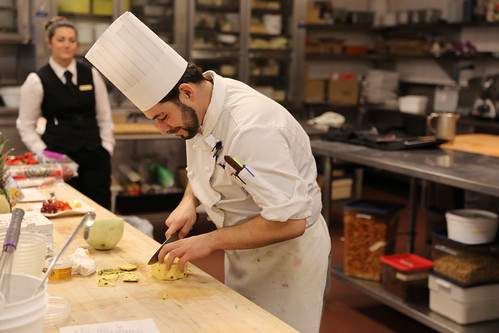 It was a quieter time, to be sure, with preparations for the final brunch buffet yet to be underway. Still, the staff we encountered were contributing to the well oiled kitchen machine. 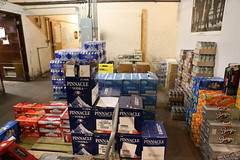 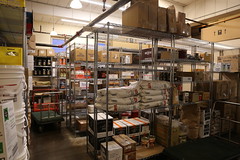 One man controls all of the alcohol and foodstuffs

We were surprised to learn that the capacity of the hotel dropped so significantly after the departure of the last Christmas in November guests, but in a way, it explains why they pull out all of the stops for the event in what would otherwise be a very slow period. 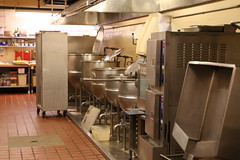 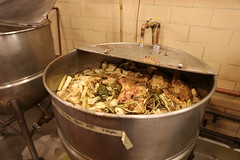 How about some stock?

It was a brief peek behind the curtain of a kitchen that did a wonderful job over the course of our stay – bravo! 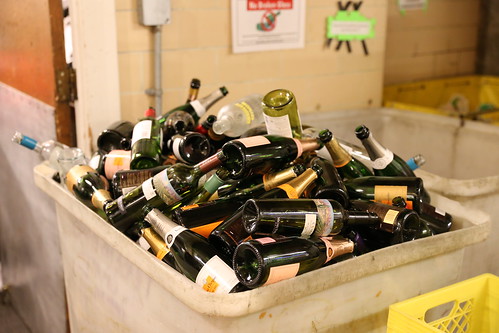 And did someone say wine?

Our last session of the weekend was with Chef Michael Allemeier of the Southern Alberta Institute of Technology. It was obvious that Chef Allemeier was not only comfortable in the teaching role, but excelled at breaking seemingly complex dishes down into a series of manageable steps. 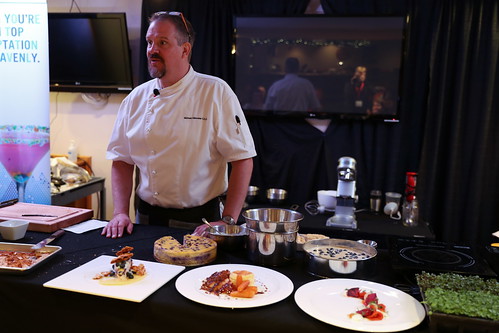 His entertaining philosophy revolved around preparing as much as possible ahead of time. In his ninety minute demonstration, he managed to work through an appetizer, a main course and a dessert. Although each dish was composed of multiple components, most could be made ahead of time and reheated just before serving. A little planning can go a long way!

Unlike some of the other menus we’d encountered over the weekend, Chef Allemeier’s was much more finessed, with restaurant-quality touches and plating suggestions. The fennel-cured salmon with horseradish mousse, creamy beets and pickled quails eggs sounds fussy at first, but it was definitely a starter with a wow factor. 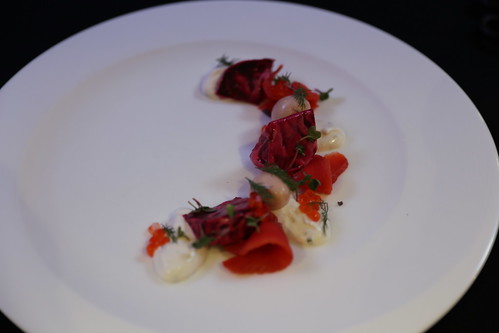 Some of his tips:

Chef Allemeier’s recipe for cardamom clove glazed ham with ginger snap crumb was much more familiar, but was paired with a unique twice baked souffle instead of the usual scalloped potato. His trick for hams (the majority of which are already cooked and more easily dried out) is to keep the temperature low and to build a delicious glaze. 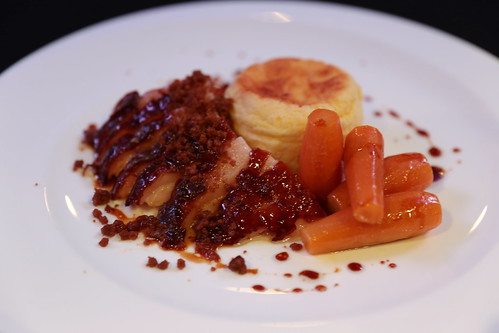 The blueberry sour cream cake and chantilly sour cream, lemon curd and sponge toffee featured recipes that could be replicated individually and work equally well paired with other sweet endings. Chef Allemeier called the sour cream cake the “unsung cheesecake”, and said that it was a dessert that reminded him of Manitoba. 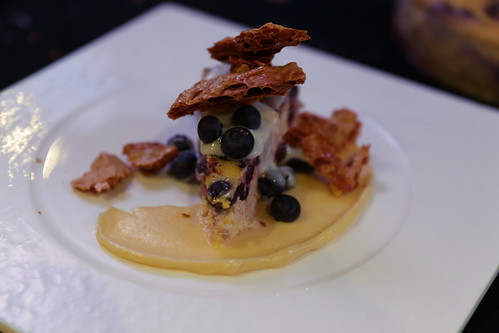 Chef Allemeier was keen to answer questions all throughout, but never seemed condescending. It was clear he was used to working with audiences who ranged in knowledge and abilities, and even factored in the need for the crowd to snap photos of the final product – each dish was plated, garnished and put forward for the paparazzi.

Thanks to Chef Allemeier for a thorough and informative session; I felt inspired to try at least one of his complex dishes at home!

After the final session, we returned to the main reception hall for our farewell brunch. Talk about overindulgence – in addition to the dozen chafing dishes overflowing with breakfast and lunch favourites, there were omelette and carving stations to choose from. 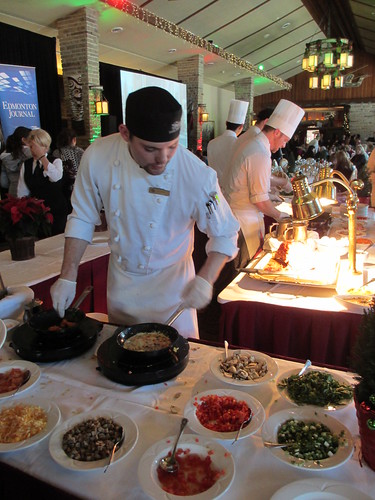 It was a good chance to wind down, and enjoy the last meal with those we had befriended over the weekend. 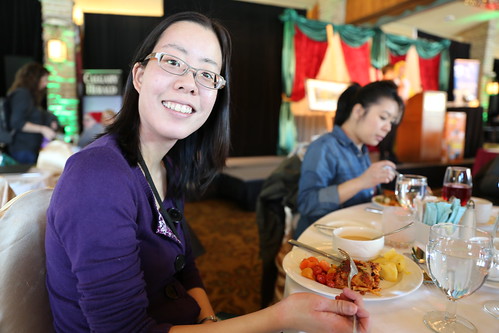 My last Christmas in November meal!

As a whole, Christmas in November provided a great opportunity to get away from the city. No question, it’s a luxurious trip, but one that combines learning and food in a wonderful setting. I could see why it has been a formula that has been successful for twenty six years. 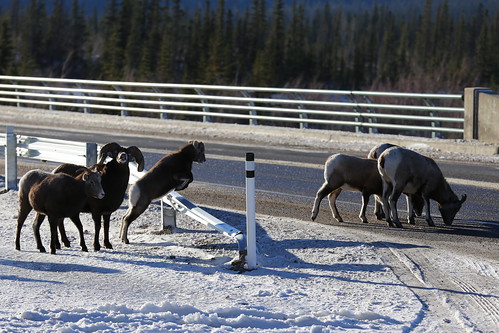 It’s hard to argue against the option of a Friday to Sunday package, especially to accommodate those who could only take one day off work (myself included), but given we only had about two hours of “free time” not spent in sessions or in meals, if we returned, we would definitely opt for a three-day package. It was really only on Sunday afternoon after the last meal that Mack and I had the chance to go for a walk and enjoy the surrounding outdoors. 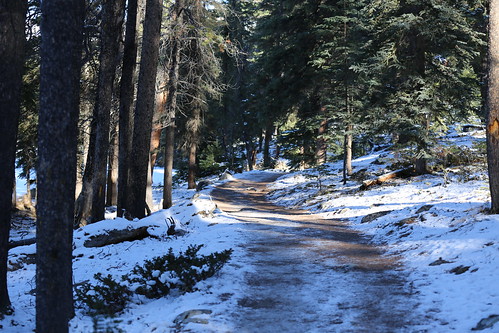 One of the picturesque paths around the Jasper Park Lodge

Based on the current website, and the desire for the event to attract a younger demographic, I’d recommend organizers release a detailed presenter and session list in advance. For those unfamiliar with the quality of the event, it would be difficult to justify the expense without knowing the content of the sessions. Also, the one page in the program that listed the names of the presenters for each of the packages would have been a great summary to refer to online – although information on each presenter was available, it was cumbersome to navigate.

It was also not clear to us beforehand just how much food and drink would be included over the weekend. The evenings featured free flowing alcohol (wine and sponsored spirits), and we were never in want of food. Between the lavish meals and the samples provided in the cooking sessions, it felt like we were eating non-stop. The extent of that value was definitely not apparent in the website description of the packages.

For small parties looking for a joint escape (like many of the ladies groups, stagettes or coworkers we encountered), Christmas in November is a timely way to do so before the season takes over with other engagements. The cost for an individual or couple would definitely have to be weighed against another similarly-priced trip to other destination, but as I’ve described over this series of posts, those who enjoy food and love to entertain will see the value for their dollar. 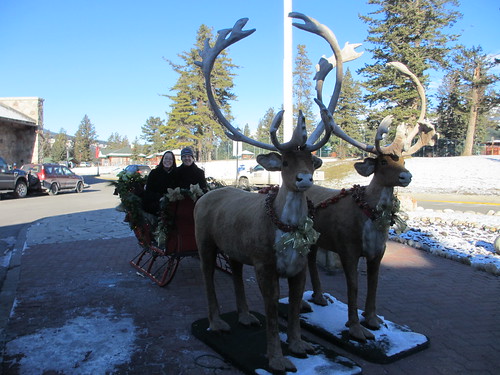 Thanks for the memories, Jasper Park Lodge!

Thanks again to Gastropost for sponsoring a lovely weekend, allowing Mack and I to experience the magic of Christmas in November firsthand.

To learn about some of the other Christmas in November sessions, and for more recipes, check out the Gastropost CIN site.

One thought on “Christmas in November: Make-Ahead Entertaining with Chef Michael Allemeier and Final Thoughts”