It has been a few years since my last visit to Lee House in Old Strathcona, but for a recent Korean food fix, I was excited to visit their second location in Chinatown. They took over a storefront on 97 Street that has been vacant for many years, a building that I remember from my childhood (it had the distinction of being the only grocery store in the area that offered underground parking). Earlier this year, 97 Hot Pot also similarly transformed a derelict, hollow shell into a bright spot in the neighbourhood, and I’m hoping Lee House is continuing the trend.

The Lee House owners did a great job with the interior, with the wood finishes anchoring the room with a warmth and familiarity not unlike a comfortable kitchen. Tables are inset with a natural gas burner, which spoke to the communality of much of the menu. 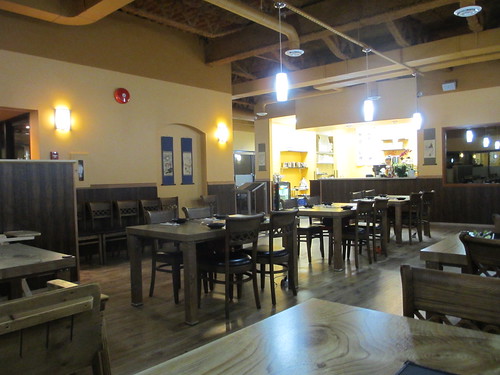 Having just been in Korea for our honeymoon, it was great to see some familiar items on the menu, spanning from barbecue to broth-based bowls and a plethora of small plates. Still, Maria and I let Roxanne (who had lived in Korea for a time) lead us through our choices. We ended up with the sweet ginger dubboki ($9.95), similar to one of my favourite dishes in Seoul, and the pork bone soup ($33.95), which seemed ideal on that chilly winter evening.

The dubboki, made up of rice cakes, fish cakes, cabbage and green onions in a ginger-soy sauce, was pleasantly sweet, though the rice cakes themselves were much firmer than their Seoul cousins. 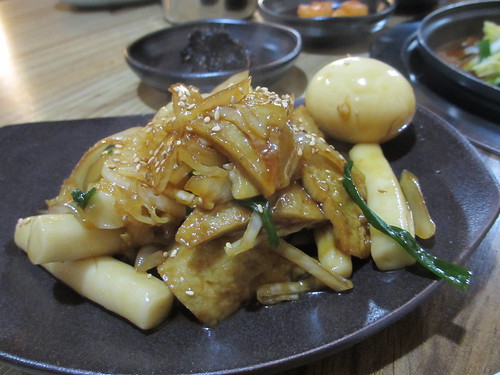 The pork bone soup felt like the main event when it arrived, complete with accompaniments. Over the course of a few minutes, simmering in front of us, the broth took on a piercing red tone, cooking down the vegetables layered in amongst the meat. But the chilli-based soup was beautifully balanced, with just enough heat to warm us through. 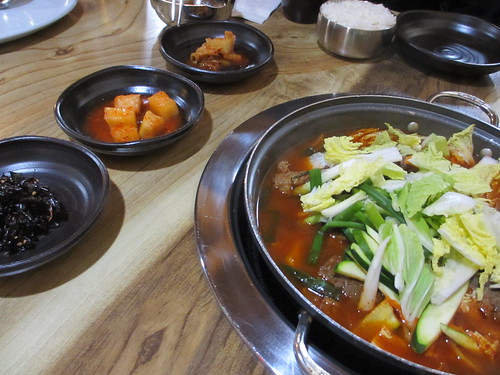 It was the kind of meal you linger over, taking your time over the dredges of soup left in the pot. And unlike some other places in Chinatown, we never felt rushed; the friendly servers were more than happy to refill our tea, and gave us the time and space to catch up. It was a satisfying supper, and shared between the three of us, amounted to just over $20 per person with tip. Our only feedback for the restaurant was to consider offering dessert, as we would have been more than happy to indulge in something sweet.

On a random Tuesday night, we were happy to see that many other people had already discovered Lee House (though it should be noted their south side location is currently under renovations). And given there are many more menu items I was tempted by, I’m sure to be back soon.