Last August, I was a part of a group that organized the inaugural 97 Street Night Market. The group was comprised of a number of young second-generation Chinese Canadians, and the market was our way to create a lively, energetic gathering to inspire a new vision for the neighbourhood.

In many ways, I think we succeeded. It was heartening to see people of all generations from many different backgrounds convening in a single parking lot, feasting, shopping, and otherwise socializing. It was a gathering place not normally found in Chinatown, and one that I hoped would be replicated in the future.

A lot of things came together to make that event happen – from gathering some of Edmonton’s food trucks to serve up Asian-themed dishes, to organizing walking tours of the area, vendors to sell trinkets and other typical night market finds, and securing performers who fit the spirit of the market.

We developed connections with like-minded groups and at the time, knew that the market would allow us to build towards other events in the future.

We will be building on the momentum from last year, and have invited some of the same food trucks and vendors to return. Molly’s Eats had a menu that was hard to beat, but Susan may have outdone herself again this year – check out the menus from Molly’s, Nhon Hoa and Yellowbird here. 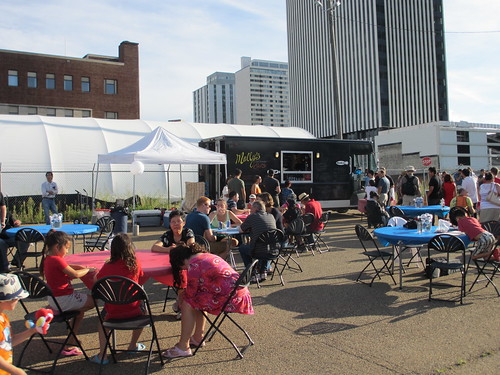 The tours were so popular that we knew we had to ask our volunteer guides back. The detailed schedule is here, but were thrilled to have Lan Chan-Marples and Peter Wong lead not one, but two historical tours this year, and Paul Giang returns to deliver a perspective on art in Chinatown. New this year (and something I’m most excited about), is our food tour. I’ve long thought Edmonton’s Chinatown deserves its own culinary walking tour, and I can finally say it’s happening! Wild Tangerine’s Wilson Wu will be guiding a small group through some of Chinatown’s food gems, complete with samples along the way. There are limited spaces, so it is first come, first served!

We’ll have a host of great performers. Convergence is back, and we’ve added a second K-pop dance group as well, R2B. Also joining us this year is a martial arts group and a tai chi instructor! We’ll be posting the performance schedule next week.

Our goal for the 97 Street Night Market is to ensure that Chinatown isn’t forgotten. Join us on August 23, 2014 to explore, taste and see what Edmonton Chinatown has to offer!