The Taste of Edmonton has been getting a lot of love this year, and it couldn’t be at a better time. Celebrating its 30th anniversary, Taste is very much a staple in the city’s busy summer festival calendar. But the organizers haven’t been resting on their laurels – over the past few years, they’ve strived to make changes in order to continuously improve the festival experience, and to try and expand their appeal to an even larger audience. To that end, I think they’ve succeeded. 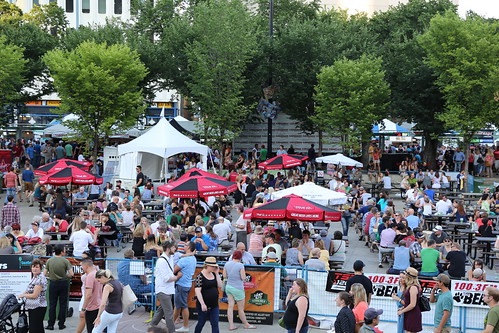 Sip ‘N Savour, Taste’s effort to involve chefs and restaurants who might otherwise not participate in the festival with a regular booth, was introduced in 2013. This year, the special workshops and pop-up evenings seemed to have something for everyone, and I loved the idea of the culinary adventures that saw off-site food and drink excursions (in a way, I’d have to think they’d be even more successful in the fall or winter, when festival calendars just aren’t as packed as during the summer months). 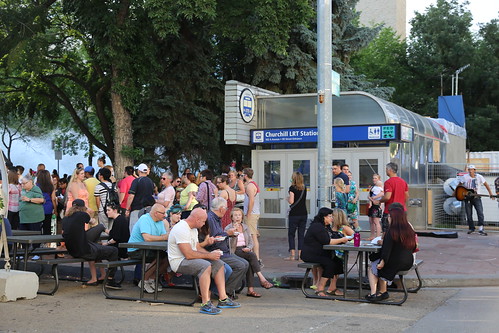 There was a lot more non-beer garden seating this year – hurrah!

But the heart of the festival – the food samples served by restaurants – is the real draw. And with a high menu turnover, and the average item priced at 3 tickets, the value for dollar was better than ever before, and patrons were able to sample an even greater variety of dishes. The complaints heard in previous years about the price of food seemed to fall away this year, as the festival returned to again offering taste-sized portions. 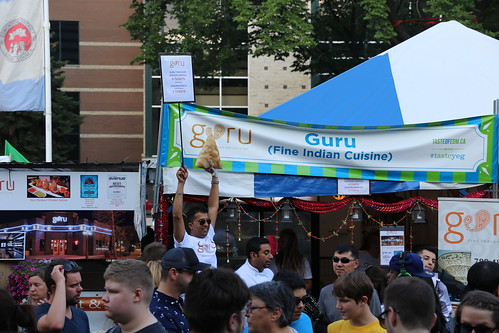 I wish more booths hawked their wares like Guru

The crowds have been out in full force, and Wednesday was no different. Lines were twenty deep at some booths, and available standing rom in some areas of the Square was sparse. But even at the dinner hour, it only took us about an hour and a half to sample more than a dozen dishes. 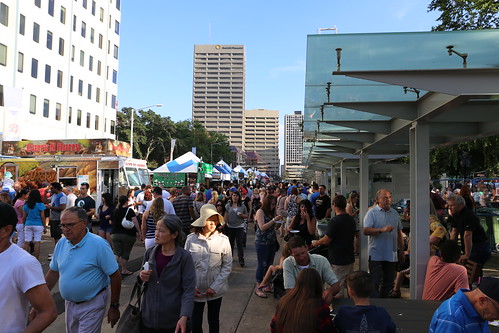 One of the highlights for me was the pizza from Canicus Catering. In a way, the food trucks have been a blessing for Taste of Edmonton (introduced in 2012). Whereas restaurant booths are immobile and harder to change over, the addition of trucks provides the festival with the ability to offer “limited edition” items, and with a rotation of trucks throughout the ten days, patrons can return over the course of the event and still try something new. 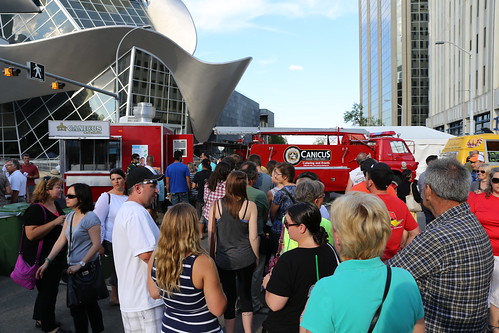 Canicus Catering is perhaps the most unique food truck in Edmonton, serving up wood-fired pizza cooked out of a converted fire truck (where the water tank has been retrofitted with a pizza oven). It was great to see the pizzas being cooked in front of us (whereas in some cases, restaurants employ the “scoop and serve” model). 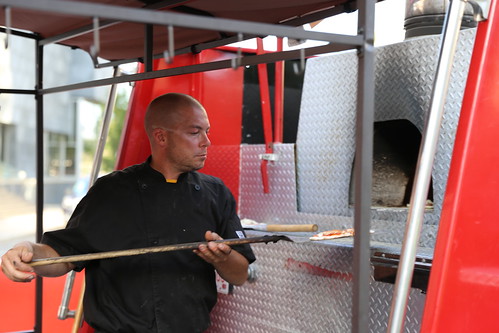 The pizza had a wonderfully crisp crust, and bubbly cheese atop the prosciutto. The fact that it was freshly prepared made all the difference. 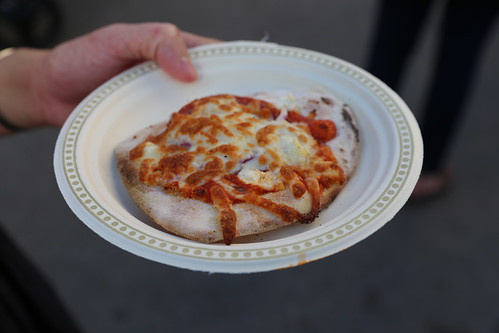 Mack’s favourite item was the chicken marsala perogies with sauteed bacon and onion from Select. The tangy flavour was a bit off-putting for me, but Mack had a different opinion. 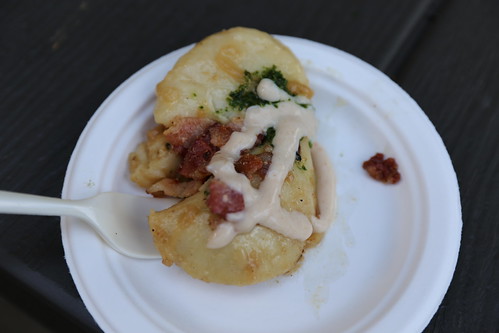 Although many restaurants claimed to use local ingredients, few named the producers, or, in Culina’s instance, put them front and centre. Listing Calgary’s White Gold and Gull Valley as its primary suppliers for its “Prairie” caprese skewer, it really did live up to its name. Mack didn’t find fault with the chicken and bacon kofta with tomato chutney either, remarking that the dish had a lot of flavour. 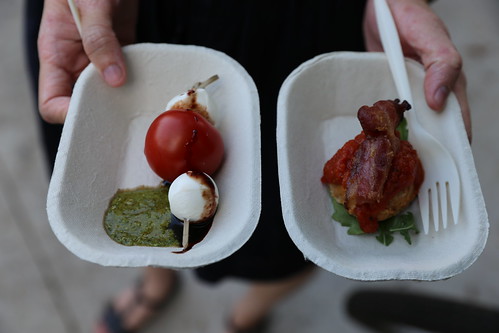 Mack, of course, couldn’t turn down crack chicken from The Lingnan. It was actually the perfect portion size in my opinion! 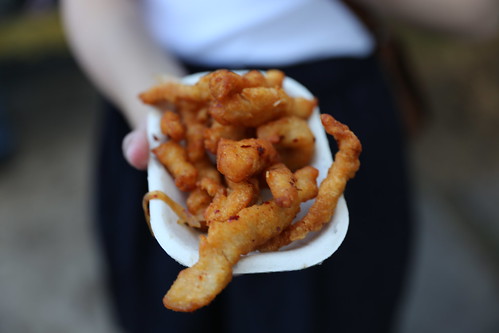 The ricotta cheese fritters from the Edmonton Petroleum Club were disappointing. We had high expectations, but unfortunately, the fritters just needed more salt. 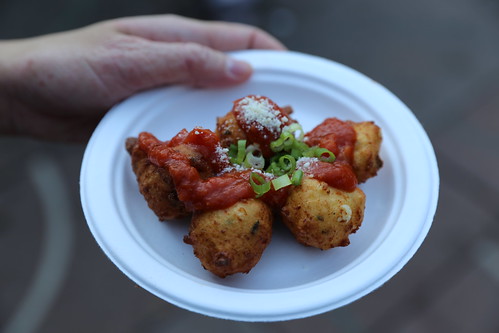 Creole Envie’s fried green tomatoes are probably an acquired taste, as they were a little too tart for me. But I did anticipate a thicker breading that would hold up a bit better. 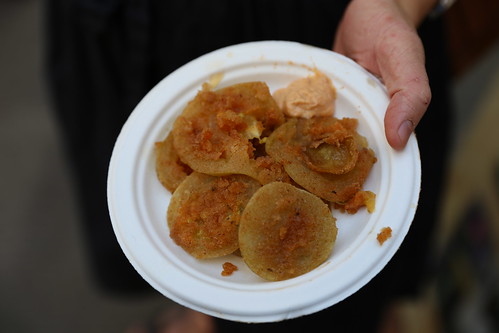 We ended our meal with Eva Sweet’s liege waffle – one of my favourite sweet treats! 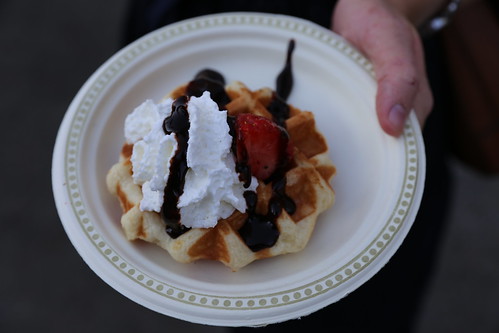 I’m already looking forward to what Taste of Edmonton may have in store for us in its 31st year – see you then!