There are many reasons behind Chef Daniel Costa’s success in Edmonton, two of which are his firm vision and an unwillingness to compromise. His obvious pride and passion for Italian cuisine manifests itself in every plate that leaves the kitchen at Corso 32, a restaurant known for its use of quality ingredients, attention to detail and eye on authenticity. As Corso 32 introduced many Edmontonians to the wonders of fresh ricotta and handmade pasta, among other things, with Bar Bricco, Chef Costa seeks to now familiarize the city with the concept of spuntini bars.

Spuntini bars, as he described to the Edmonton Journal, are found in Italy and are known as “small places you go into and you get a snack and have a couple of glasses of wine. It’s not tapas, it’s a little more than that. Small plates, with cured meats, not charcuterie.” The idea isn’t too far removed from the wine bars and tapas-oriented restaurants nearby, including Tzin and Bodega, but does complement the scene particularly with its pasta offerings.

In the last month or so, I’ve been to Bar Bricco twice – once with Mack and a second time with a girlfriend. To say its been well-received is an understatement – both times, soon after arriving, I watched the space fill to standing room only in no time at all. It’s sleek, minimalist, and yes, a little loud, but I didn’t mind. 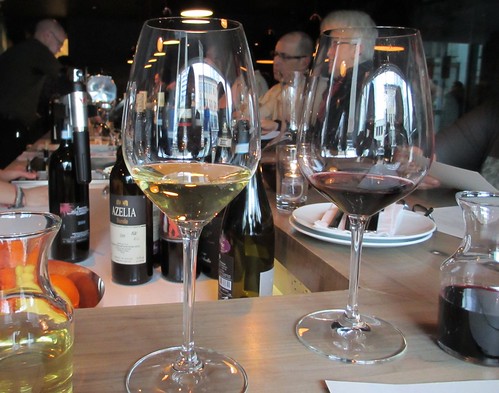 The menu is divided into bread, spuntini, meats and cheeses. Over the two occasions, I was able to try several dishes. The pasta dishes were the among the highlights. The the egg yolk raviolo ($13) was a showstopper: thin, handmade pasta enclosing creamy ricotta and a perfectly cooked, luscious yolk. The fonduta agnolotti ($14) was as fun to eat as it was delicious, with bite-sized pasta meant to be dipped in sage butter and rolled in parmesan. 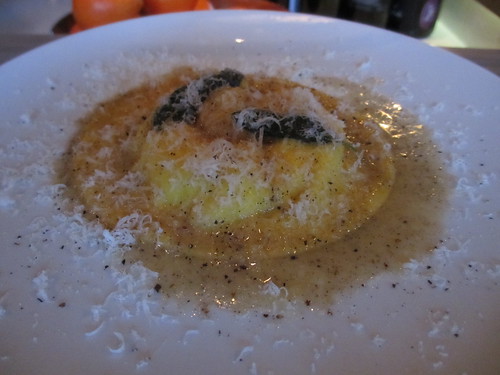 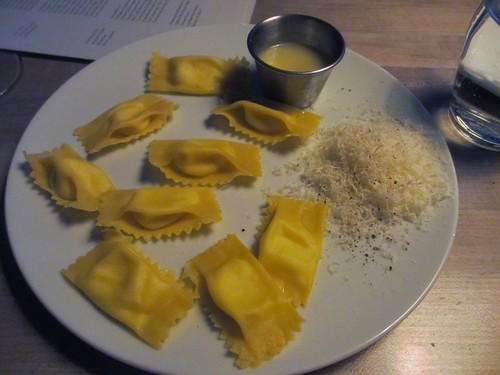 The eggs moliterno ($12) was explained to us as eggs cooked over a double boiler – but I know it has to be more complicated than that (or at least, I need to use a recipe – my attempt to replicate this failed miserably). The eggs had adopted a spreadable consistency, and spiked with truffle oil, pepper and cheese, they were a revelation in the possibilities of scrambled eggs. 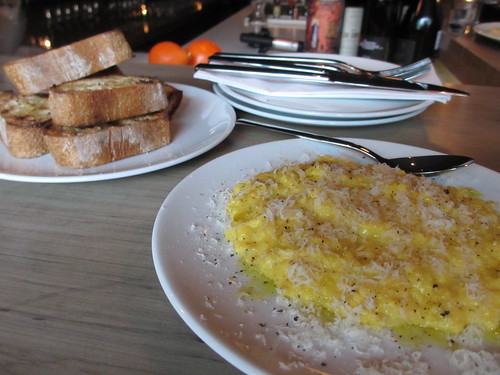 Interestingly enough, the meats and cheeses were secondary to the cooked dishes. The tasting plate ($24) was freshly sliced and featured a good variety, but as a whole, was forgettable. The cheese, on the other hand, was overwhelmed with the truffle and black pepper honey condiment – perhaps it could have been served on the side? That said, the accompanying house grissini, or breadsticks, were notable, and my friend remarked that they tasted exactly like those she has only ever found in Italy. 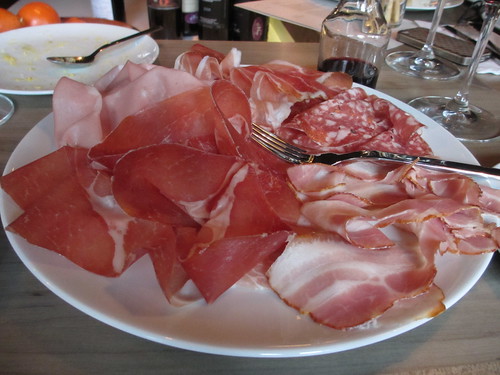 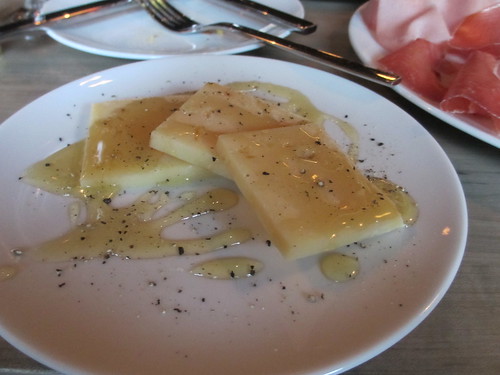 Cheese (the name of which escapes me)

Service was better when we sat at the bar than at a table, but I know the waitress on that second occasion had trouble distinguishing our party from the couple seated next to us.

Bar Bricco continues Chef Costa’s vision to expand Edmonton’s appreciation for authentic Italian food and concepts. His consistency makes him one of the city’s most respected chefs, and is definitely one to watch. Next on his radar: an 80-seat urban trattoria/pasta house in the space that housed Transcend.