Trying on wedding attire after consuming a fried chicken dinner probably isn’t ideal, but in a way, if not for a full stomach, how could one adequately determine whether or not a dress could comfortably accommodate a reception meal?

I’m lucky my sisters are typically game for anything, so when I suggested dinner at Coco Deep Fried Chicken before a weeknight appointment at a southside bridal salon, they barely put up a fight. It was a good opportunity to give this relatively new Korean joint a try, given I’d read so much about it.

The interior is simple, the extent of the décor being a few chicken and kitchen-related prints on the walls. Given the restaurant only opened late last year however, the deteriorating floors were particularly noticeable. Hopefully that will get looked at soon.

If the crowd spoke to the authenticity of Coco Deep Fried Chicken, I’d have to say it was a good sign. The two tables already digging into their meals when we walked in that evening looked to be Korean, and nearly every other party that walked into the shop were also of Korean origin. The owner, upon finding out that it was our first visit, assured us that the chicken tasted “just like in Korea” (for the record, none of us have ever been, so we wouldn’t be able to make a first-hand judgment call).

Some might be put off by the fact that Coco Deep Fried Chicken really only offers their namesake dish, but I respect a restaurant that dares to do this (and think there should be more of them!). The extent of their menu variety involves fried chicken and sweet and hot chicken (otherwise known as Korean fried chicken). Eyeing the three of us, the owner recommended the ten piece box. That seemed like too much food, so we toned down the order.

Amanda and I shared a four piece order and and fries ($10.99). We dug into the regular chicken first – we both loved the crunchy breading, just thick enough and freshly fried. The meat underneath was moist and tender, though we did hope for more. We were starting to understand why a larger serving size was recommended to us. 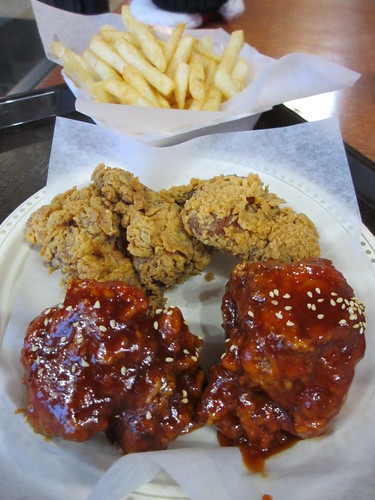 Four piece half and half chicken

The sweet and hot chicken was exactly as it sounded, though for our palates, it leaned more towards the latter. It definitely had us reaching for our drinks, but was a spicy flavour contrast to the plain fried chicken. We did wish the restaurant had a supply of wet naps though!

Felicia had ordered the chicken and waffles ($7.99), but really wasn’t expecting what she received – two toasted freezer waffles. I know it’s the trendy dish right now, but the strength of Coco’s main dish is enough to bypass bandwagons. 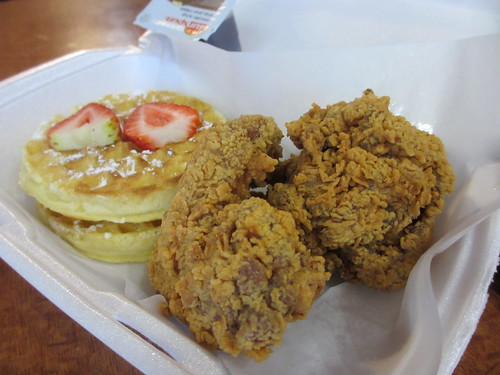 It sounds like Coco also does a mean take out business, so should you be in the area, be advised – there’s a new KFC in town! Just make sure you order more than you think you’ll need –