Mack and I have had intentions to visit the Asparagus Festival at Edgar Farms for several years, but summer weekends are always too easily filled. This year, we made sure to book it in our calendar well in advance, and finally made it out there on June 15, the last day of their 2014 festival. 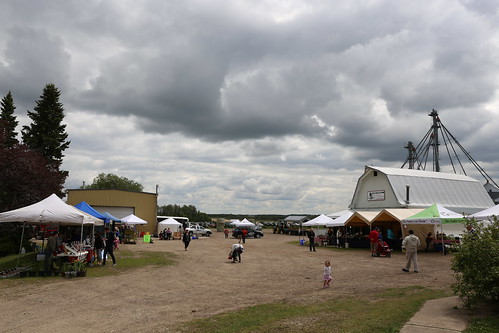 Edgar Farms is located in Innisfail, about two hours south of Edmonton. They offer rhubarb, peas and grass-fed beef, but what they are known for is their tender, sweet asparagus. With 28 acres, they have the largest asparagus patch in Alberta.

The $5 (per adult) admission granted us access to explore the farm, take part in tours and sample asparagus-centric dishes. We started with the latter first – if not just to warm ourselves up! It wasn’t the warmest of days, with clouds threatening rain all afternoon, so creamy asparagus soup hit just the right notes. The southwestern beef on a bun was fine (especially with pickled asparagus as a condiment), but what really surprised us was the asparagus dip – the Edgar Farms version of guacamole, substituting asparagus for avocado. It would be a great use for those bags of asparagus “seconds”! 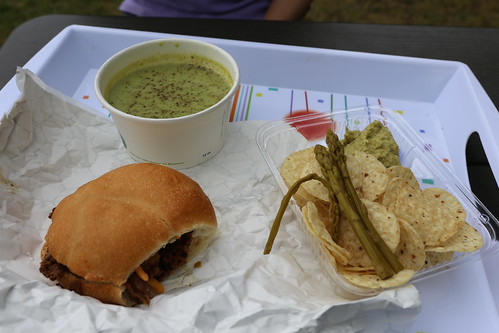 Satiated, we ended up first on a self-guided tour of the farm, then joined up on a tractor-pulled group tour. The self-guided tour was marked by informative posters along the way (some cheeky in nature), and given we were the only ones exploring on foot at the time, granted us some time and space to take in the farm at our own pace. 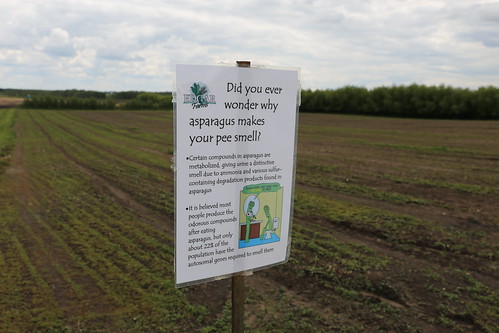 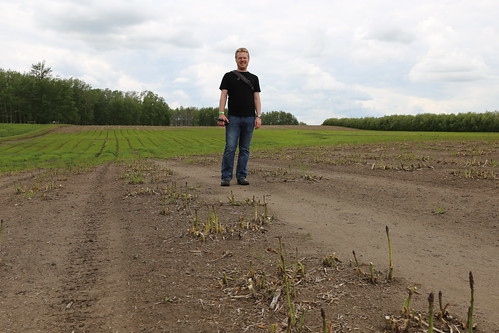 Mack on the farm

This was our first time seeing asparagus plants, and both of us were surprised at how patchy they appeared to be sown, with the scraggly spears of each crown shooting up at intermittent levels (Mack commented that he expected to see a field flush with asparagus, not unlike a wheat field). We learned later that the asparagus are harvested daily, and given the spears can grow up to ten inches a day, the patchwork effect made sense. 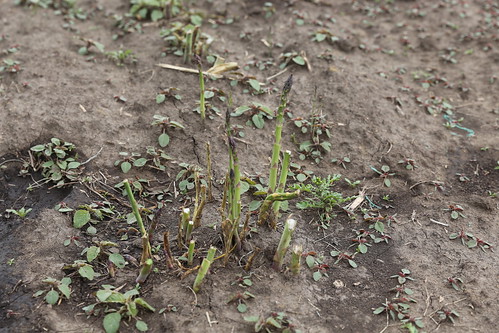 We also got to see firsthand how sandy the soil was. Because asparagus prefer warmer conditions, the sandy soil is perfect to capture and retain heat, as well as offering better drainage. It now made more sense as to why the Edgar Farms staff at the farmers’ market were always strongly recommending thorough cleaning of asparagus prior to consumption. 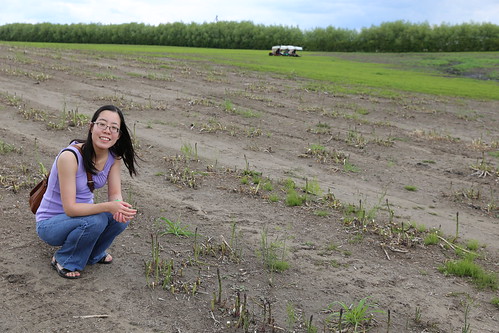 On our walk, we saw some asparagus pickers at work, riding a foot-controlled “asparagus buggy” built by the patriarch of the farm, Doug Edgar. The vehicle enables three farm workers to cover a lot more ground, as all of the asparagus is hand-picked. 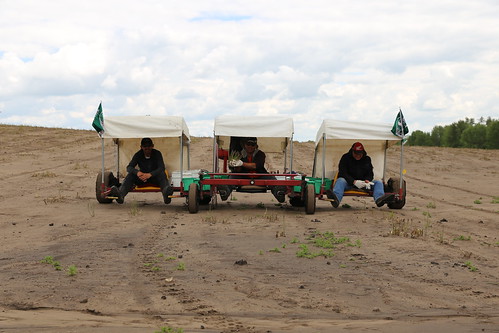 Say “asparagus”! (the staff were nice enough to pose for the photo)

Later, on the group tour, we were told that the plants take five years to mature to the point where they can be harvested for six straight weeks. And when asked how long the perennial would continue to give asparagus, our guide cited neighbouring plants that were still healthy at over one hundred years old. 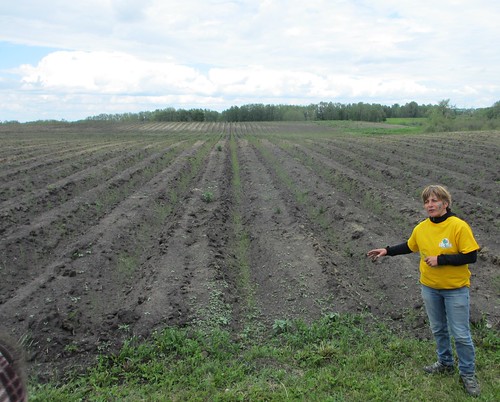 At the end of June each year, the asparagus are left alone, and allowed to go to fern. We were told this allows the plants to rejuvenate for the following year.

Back at the barn, we watched staff weigh and bundle asparagus, before placing it in a cold water bath to help the vegetable retain its natural sweetness. 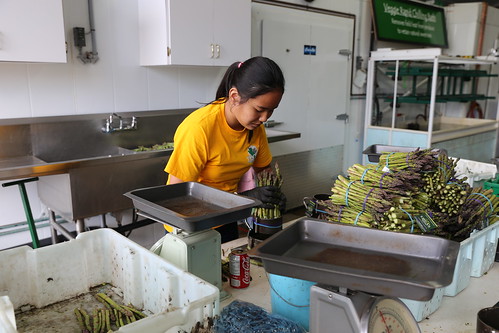 The farm’s commercial kitchen was located on the same facility, which allows the farm to value-add to their products and extend income past the short growing season. We picked up a handful of their frozen rhubarb and berry pies to take home (not sold at their stand in Edmonton, but can be found at the Edgar Farms/Innisfail Growers Calgary Farmers’ Market booth). The pies didn’t last two weeks in my freezer, as they were promptly devoured by my pie-loving family. 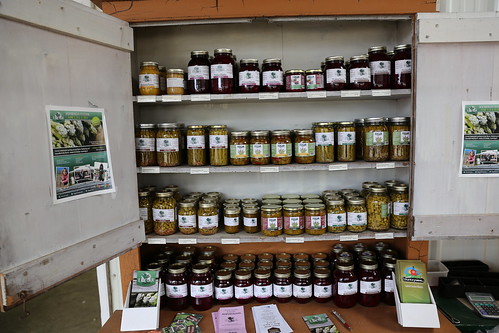 Some of the Edgar Farms bounty

The farm also offered numerous attractions for kids – lots of friendly animals, a play area, and even an asparagus mascot! 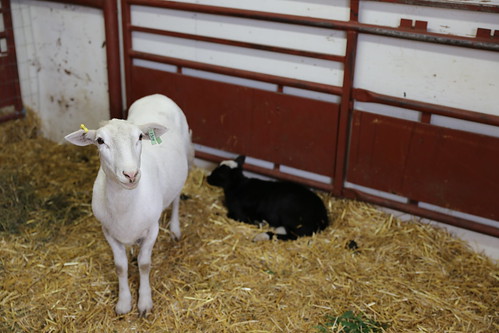 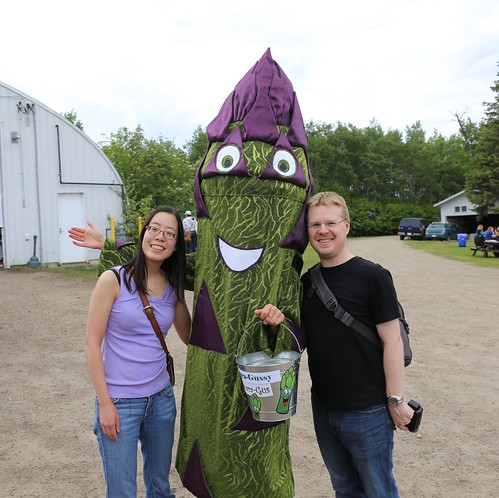 Okay, so we’re not kids, but who could resist Gussy?

The Asparagus Festival was a fun day trip, and a great way to spend a summer afternoon. I’d recommend it to anyone interested in learning more about local food – watch for dates in June 2015.

I love reading the weekly updates from Edgar Farms, and in particular, seeing the first snapshots of the season capturing those darling, plucky stalks of asparagus bursting upwards from the soil. Sure, there are many ways to tell that spring is upon us, but I think it’s great that we are lucky enough to have a timely, seasonal vegetable that can act as our harbinger of spring.

At $6 a bunch, they’re not an inexpensive purchase at the City Market, but for the product’s freshness and ability to easily last a week in the fridge, they’re worth the cost.

What’s better than a side of simple, roasted asparagus? Tossed with some olive oil, salt and pepper, and placed in a 450 degree oven for 8 minutes or so, the crisp-tender stalks are bright and tasty.

I’ve written in the past about my love of the versatile dip/spread as my office potluck staple dish – it allows me to escape the pre-lunch crush at the stove/microwave as my fellow colleagues rush to heat up their contribution. And, really, it’s allowed me to try out new recipes without having to commit to eating an entire sampling myself.

This time, an asparagus pesto recipe in the NYT caught my eye, and its radiant green hue seemed perfect for a spring potluck. I threw the blanched asparagus pieces with some of the cooking liquid, garlic, pine nuts, olive oil, parmesan, black pepper and a dash of lemon juice into the food processor and blended everything until the mixture was creamy.

The result was a smooth, hearty dip with a deep, earthy flavour, and one that I am happy to say solicited many requests for the recipe.

It’s a versatile pesto, and one that I look forward to trying with pasta as well, as suggested in the recipe.