One of the very thoughtful wedding gifts Mack and I had received was a gift certificate to Get Cooking. Kathryn Joel’s brand new kitchen studio, located at the MacEwan University Residences, had opened around the same time, and we knew at some point we’d want to check out her new digs, which could accommodate even more learners.That said, even when she was teaching from her home kitchen, Kathryn always managed to collaborate with great local talent, bringing in cuisine content experts that could help eager participants navigate through foreign flavours and techniques.

As soon as the winter schedule was released back in December, Mack and I jumped at the opportunity to learn about Indian street food with Addie Raghavan in March. We knew he’d be just returning from a long sojourn in his native India, where last summer he spent time acquainting himself with cheesemakers pushing the boundaries beyond paneer. 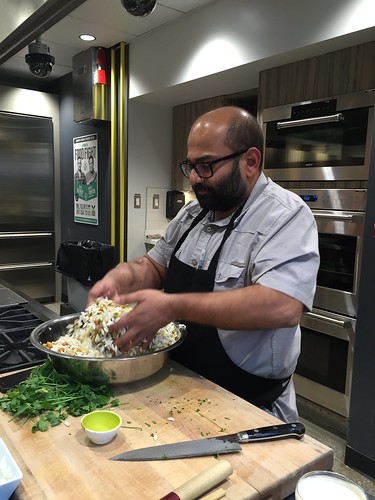 Over the course of the evening we learned to prepare two snacks, four main courses, and a dessert. Given the focus on inexpensive food available on the street, most of the dishes were ones we had never encountered before. 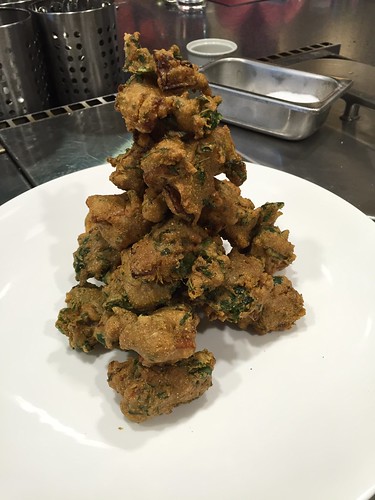 Mack really loved the jhal muri, a vegetarian snack full of varied texture and fresh ingredients, including puffed rice, fried noodles, spicy roasted peas, cilantro and chopped tomatoes. It was quick to pull together, and would feed a nice sized crowd. 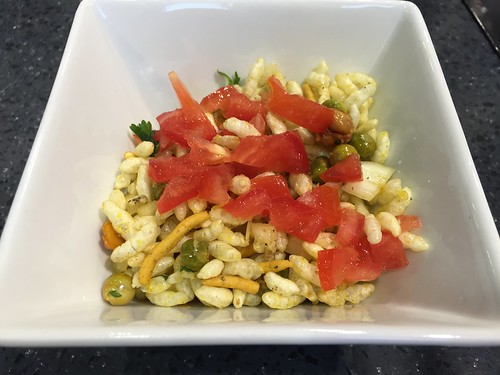 The misal pao started with a sprout and lentil curry, which Addie made with mung beans soaked in water overnight (starting their sprouting process). It also incorporated dried kokum fruits, a souring agent that reminded us of tamarind. And instead of being served with naan or chapatis that we were more familiar with, because of the Portuguese influence in the Northern Indian region where the dish is found, the curry is traditionally eaten with leavened buns. 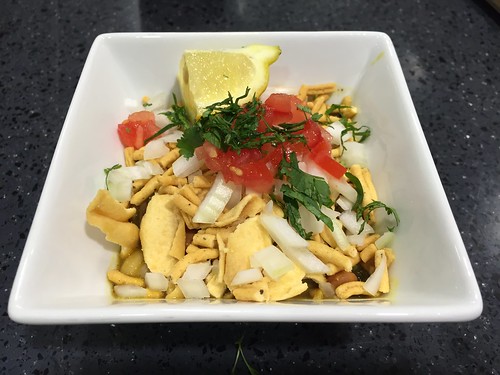 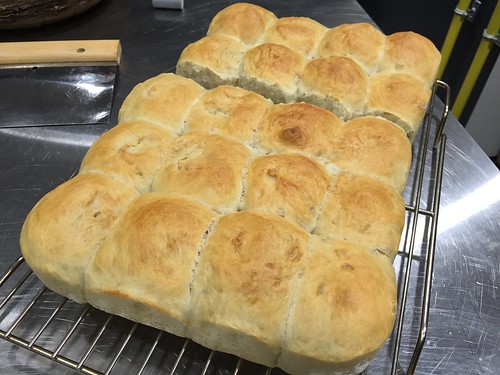 Get Cooking’s slogan is “think local, cook global”, so throughout the evening, Kathryn highlighted the suppliers who provided the proteins used that night. The Chettinad fish fry, for instance, made use of Icelandic red fish, sourced fresh from Ocean Odyssey. The recipe itself was fairly straightforward – marinated fish seared in coconut oil (“Solid at Canadian room temperature”, joked Addie). But the revelation involved the garnish of fried curry leaves – I really enjoyed the burst of aromatics they added to the dish. 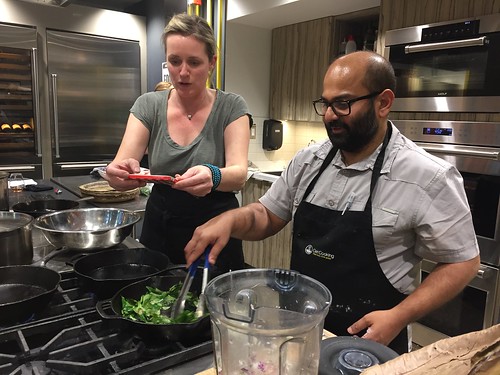 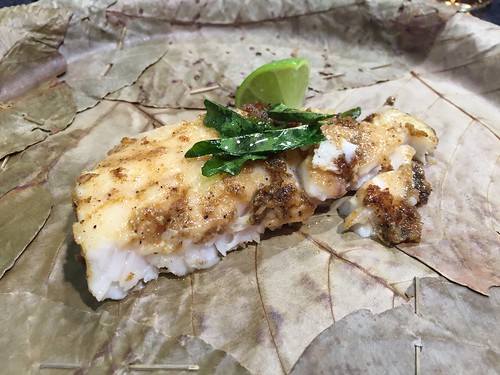 Chettinad fish fry, served on plates made of dried leaves

Chicken lollipops are the perfect street food in many ways, self-contained and not requiring utensils. They’re apparently so popular in India that at the butcher shop, you can purchase already-lollipopped chicken to prepare at home. Mack loved the chicken, battered in a garlic and chili-infused coating and fried to a crisp. 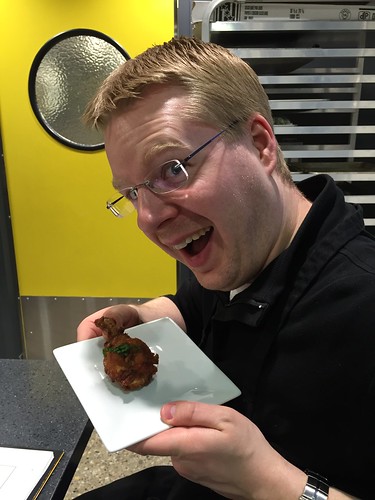 Addie brought in off-cuts of meat with the bheja fry, featuring lamb brains. Although the recipe could also be made with eggs, given the inexpensive nature of offal, it was definitely a truer representation of an Indian street food dish. 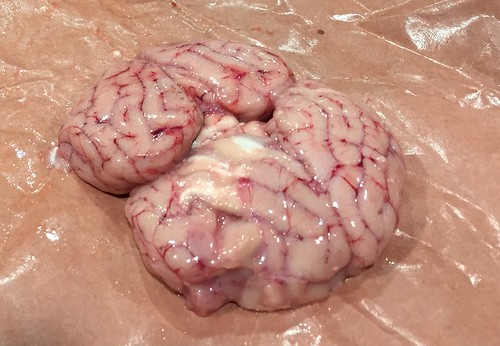 The brains were first boiled, then stir-fried with onions, tomatoes and spices. It was my first time sampling brain, which was creamy in a way I did not anticipate. While it wasn’t my favourite of the recipes shared, I’m glad Addie didn’t just play to a mainstream palate. 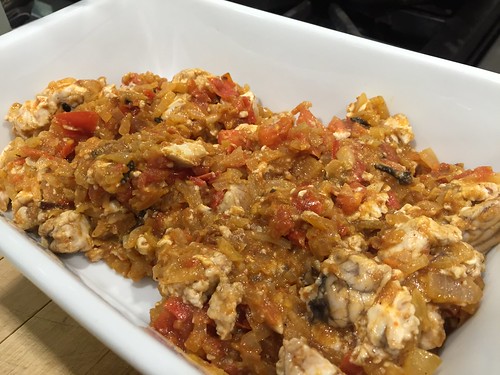 For dessert, Addie made jalebis infused with bourbon. I always find that jalebis are much too sweet for me, although I could appreciate this more “adult” version. 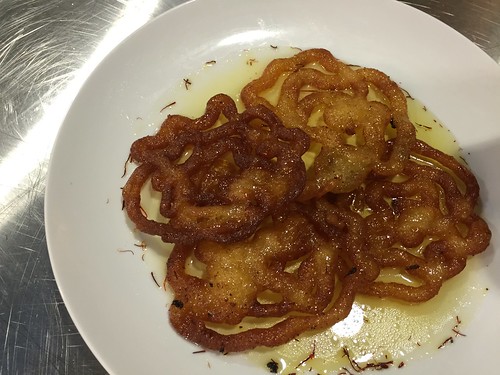 I think Mack and I were anticipating a more hands-on class as a whole, but participation was limited to some instances where Addie invited learners to help chop or fry. I understand the time constraints (seven dishes in four hours!), but it would have been nice for more deliberate opportunities to get our hands dirty.

It was obvious that Addie knew the content; he was able to answer our curiosities and questions with ease. But in terms of organizing the lesson, I would have preferred some context to precede each dish (and to be fair, it was our fault that we were fifteen minutes late). It is possible that we missed an introduction which would have provided a broad overview to street food. Given we visited several different regions through the food, I would have loved a map representing where each dish originated, and more information about the regional influences, ingredients available, and different cooking methods used.

That said, the evening was all-inclusive – we were stuffed by the end of the night, and had our share of drinks; each course was accompanied with a wine or drink pairing. Kathryn and her staff were more than hospitable, and we felt as welcomed as we would have been in her home.

It was an educational session, and I know moving forward, I will definitely be making the fish fry and misal pao in the near future. Thanks to Addie and Kathryn for a night of learning and good food!

Check out the schedule of upcoming Get Cooking classes here, including North Indian Cuisine on May 10 and Indian Vegetarian on June 14 with Addie!