When the Dish and the Runaway Spoon announced the closure of their restaurant at the end of 2016, I mourned the loss of one of Edmonton’s most unique patios. The “secret garden”, as it was known, was tucked behind the back of the building and only accessible through an adjacent gate. Shielded from the traffic noise of Stony Plain Road, the combination of the pergola, hanging plants, and the shelter of a fully grown tree created the feeling of an oasis in the middle of the city. When it was announced that Bodega would be taking over the space (opening their third location to join the original Downtown and the second in Highlands), I was glad that they also decided to reopen the patio as well.

Two weeks ago, I met up with some girlfriends at Bodega 124 Street for brunch, which we enjoyed outside on the patio. Although the furniture and planters have been refreshed, it appears that not much else has changed, and the space is as charming as I remember. 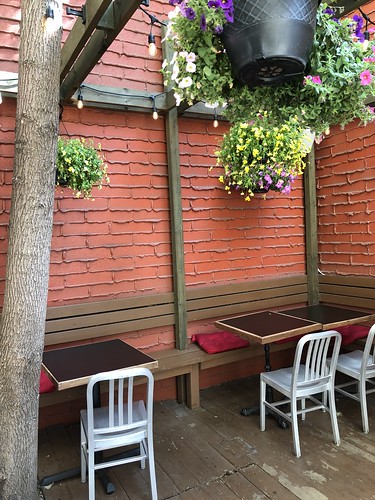 It so happened that same weekend the restaurant had a special 3 course Prairie on a Plate menu, so we were fortunate to also see how Chef Lino Oliveira would choose to showcase some Alberta products for the very reasonable price of $25 (as Sharman noted in her post, he incorporated Alberta canola, eggs, milk, pulses, turkey, and pork).

The menu offered three mains to choose from. It seemed brunch here has changed somewhat since the restaurant opened back in January. Originally, Bodega 124 Street offered many brunch plates (similar to the menu at Bodega Highlands I had tried last year), but as so many diners were requesting their tapas menu, by popular demand, they now offer their full tapas menu supplemented by a trio of brunch specials. Although this particular menu incorporated local products, the server did share that the mains were pretty typical of what they would serve any other weekend.

A note on their coffee (which I consider a brunch necessity) – when we ordered coffee, the server informed us that they were brewing French vanilla. I typically avoid flavoured coffees as the additives are usually trying to compensate for a poor quality bean. In this case, I did find the coffee a bit thin and sub-par; perhaps this was just a one-off for Bodega, but my hope would be that they adopt the same standards for their coffee as they would for their other ingredients.

The first course was a two-bite appetizer featuring a slice of Winding Road’s RDB cheese and quince marmalade on bread. The flavours paired nicely together, the sweetness of the quince balancing out the more pungent notes in the cheese. 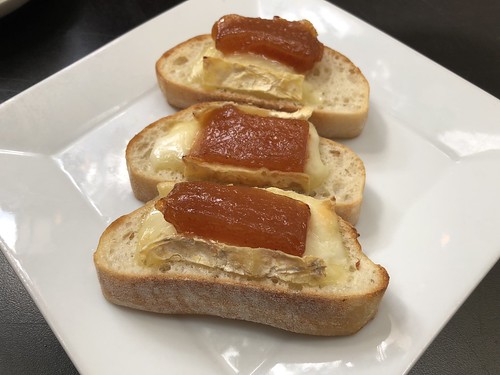 Of the three mains, May’s crispy turkey was the unquestionable winner. Two generous pieces of turkey, breaded with cornflakes and chickpeas and fried, served with a a potato and bell pepper hash and a side salad. The turkey was deliciously crunchy on the outside and moist on the inside. 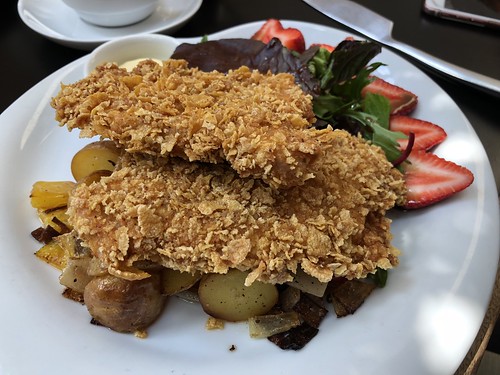 Annie’s enjoyed her choice of potato wrapped braised pork cheeks – I had a bite of the pork which was nicely cooked. 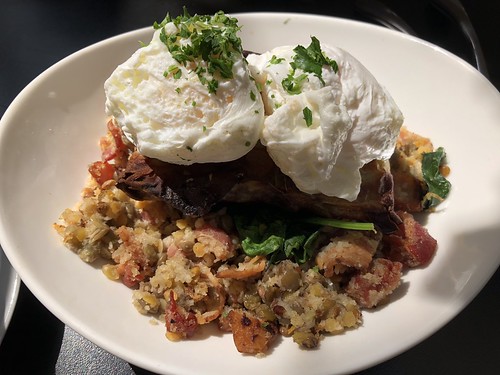 I had ordered the coca verduras, which had been described by the server as somewhat similar to a pizza, with a Spanish flatbread acting as the crust, and another appearance of Winding Road cheese – this time, the fromage blanc and Josef. Although I liked the toppings well enough (the slight tang of the vegetables, and perfectly soft poached eggs), the dough was much too dense and weighed down the dish overall. 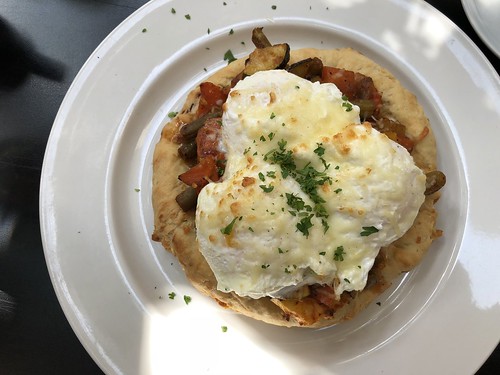 For dessert, we were served a warm Portuguese custard tart with a sprinkling of cinnamon. I confess I was already much too full, and had to pack it up for later. 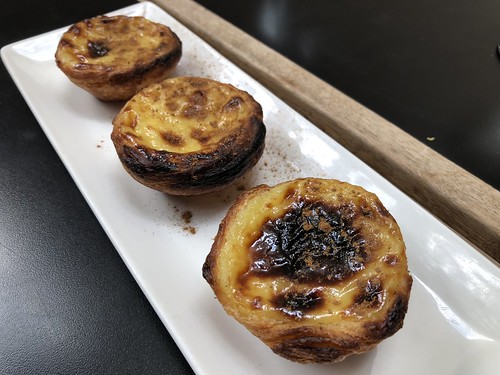 Service was excellent, especially given we were (surprisingly!), the only party on the patio for most of our meal. We never felt rushed, and our server did a great job to make sure our needs were taken care of.

I’d be eager to return to Bodega for a glass of wine and some tapas, which, enjoyed out on that special patio, would surely taste even better on a warm summer evening.

One thought on “The Return of the Secret Garden: Bodega 124 Street”