Even though we were only in Toronto for a week, we managed to cram in many restaurants new to us.

A surprising highlight was Smoke’s Burritorie (how can you not love it based on the name alone?). We stopped there for a pre-Jays game lunch, after we found the wait at Amanda’s neighbourhood brunch place, Mildred’s Temple Kitchen, was upwards of 1.5 hours. As it turns out, we were the only customers in the Burritorie. 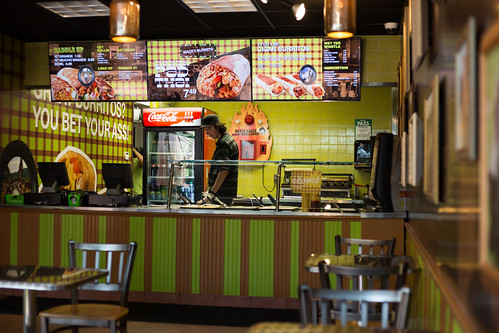 Their poutine burrito, customized with any number of meats, rang in at just $7.49, but with the crispy grilled exterior, slightly sweet gravy, and delectable chorizo, was one of the best things I ate all trip. Smoke’s most recent offshoot, the Weinerie, will definitely be on our to-go list the next time we’re in town.

I’ve been wanting to try Kinton Ramen for some time, and we finally made it in on this trip. The Queen West location was quiet when we arrived around 4pm, but I imagine service to be efficient anytime in this well-oiled machine. The tonkotsu broth was deliciously creamy, and perfectly seasoned, though Mack’s shoyu broth was on the salty side. 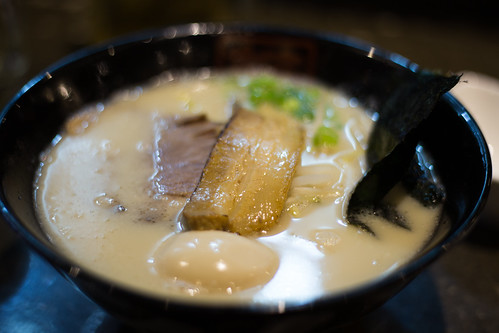 The thin noodles had a nice bite to them, while the pork shoulder and belly was torched to order, further enhancing the flavour. With five locations in the Toronto area, we can understand now the quality that has led them to a ramen empire.

Amanda had been wanting to try Valdez, a new-ish Latin American restaurant, down the street from her condo. The bumpin’ vibe reminded me of Rostizado, with menus also driven by the ever-popular family-style philosophy. The standout dishes for me included the chaufa, a duck confit fried rice dish, and mofongo, a plantain-based dish that made me entirely rethink plantains (and for Mack, lived up to the SNL David Ortiz joke). 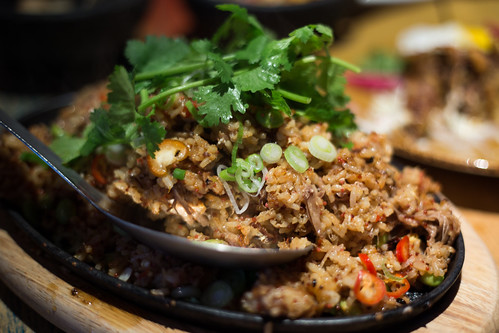 I also liked their take on chips – beyond tortillas, they included fried plantains and root vegetables. 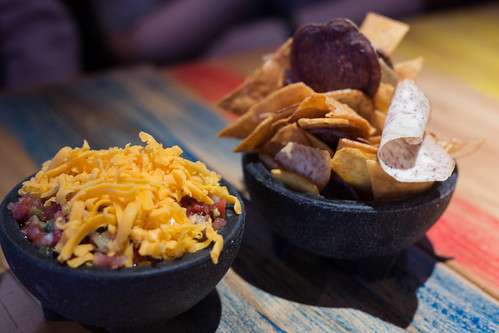 Figo was my post-Jays game pick, one of Toronto Life’s best new restaurants this year. It is a simply stunning room (made for Instagram), with marble table tops, soft lighting and a Parisian feel. I’m still not sure the server should have been so enthusiastic about the feature wine that I tried (a clay-aged white from Slovenia that tasted closer to a cider than a wine), but we really enjoyed their signature zucchini fritters – tempura-battered ribbons of zucchini (and at $9 per plate, must be a huge money maker). 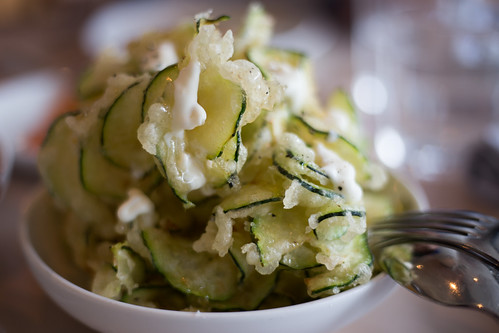 Mack’s scallops were well-prepared, while the pasta in my wild boar bucatini should have been cooked further. 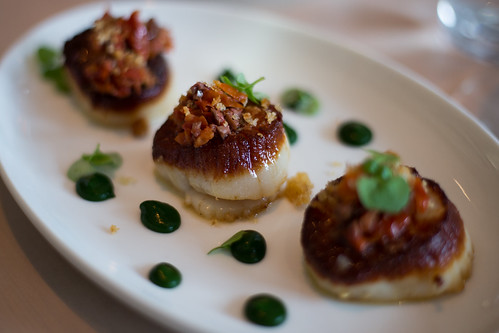 Figo would be a lovely spot for lunch to take full advantage of the windowed space.

Sweet Jesus, a Milk Bar-style soft serve parlour, seemed to be the hottest thing in Toronto, with line-ups easily 50 deep at any given time. The weather wasn’t even particularly fitting for ice cream during our stay, but we braved the lines and tried it anyway. The soft serve centrepiece was noticeably thick and creamy (meaning in the cold we didn’t need the benefit of the melt guard around the base), and held up well to the ridiculous topping combinations. For Mack and I, it was bits of smashed Christie’s cookies, and for Amanda and Jason, studs of birthday cake, complete with a lit candle to celebrate. Is it worth the wait though? It was probably more satisfying than our New York experience of Milk Bar, if that speaks to our enjoyment of it. 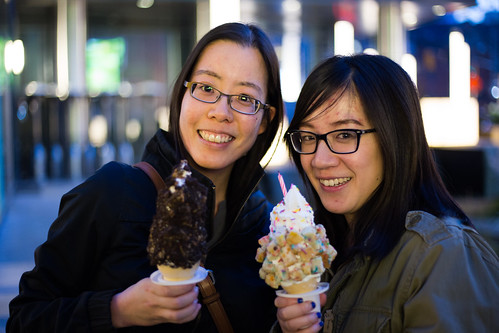 With our Sweet Jesus ridiculousness

DaiLo, a hip Asian fusion restaurant, had an interesting menu. It was packed to the brim even on a Tuesday night, with a noise level that nearly rivalled People’s Eatery. Another establishment that is set-up for family-style sharing, the server started off on the wrong foot by suggesting we "order more dishes than we think we could eat" when asked how many she would recommend for a party of four. Then, when our first two dishes arrived, comically tiny, we thought the small-plate trend had gone to the extreme. By the end, our other plates balanced things out. 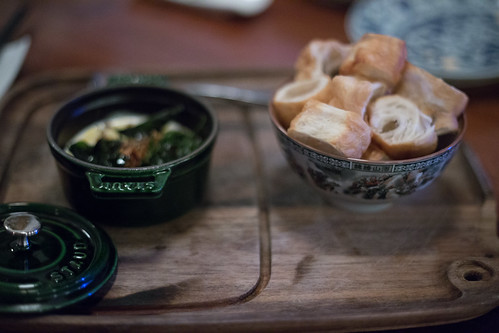 Jason couldn’t get enough of a puréed salt cod dip, served with Chinese doughnuts, and Amanda and I appreciated the masterful hands behind the fluffy steamed buns that formed the basis of a build-your-own char siu sandwich. 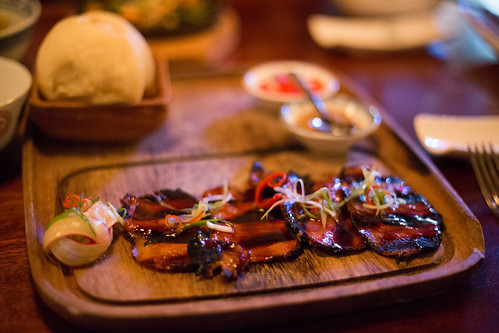 The Korean confit duck legs also had great flavour, with crispy skins and just a hint of gojuchang heat. With the packed Bar Raval next door, it’s a way for out of towners to get a 2-for-1 experience of what’s hot in the T.O.

Our friends Janice and Bennett suggested a new restaurant in their east Toronto neighbourhood for our dinner out. Saturday Dinnette has a great story – the chef/owner found out she was pregnant soon after opening the restaurant, so had no choice but to raise her child at the restaurant, so to speak. 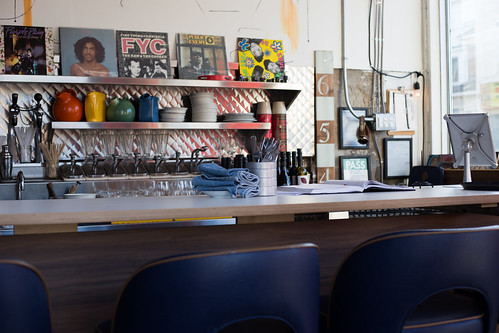 When her son Miles was a baby, the crib was parked next to the stove, and servers would take turns bussing tables with Miles on their hip as his mom cooked. Miles is a toddler now, so his crib has since been moved, but it’s a great reminder of the adjustments some working moms have no choice but to make. The diner-inspired menu featured a creamy mac ‘n’ cheese, though our favourite dish was the cornbread, dusted with icing sugar and sweet enough to be a dessert. 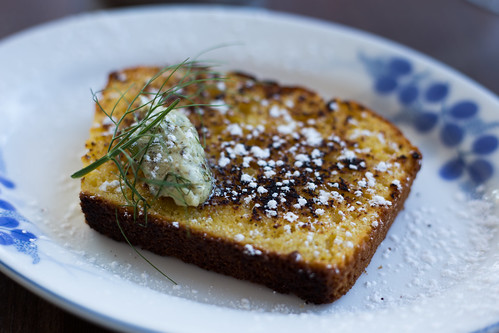 Four years ago, we checked out The Drake when it was one of the new anchors of West Queen West, and Chef Anthony Rose was an up and coming name. Now, he has an empire of his own, so we were curious to see what one of his standalone restaurants would be like. 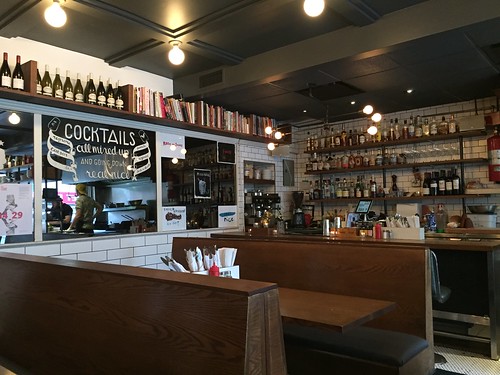 Rose and Sons at Dupont had some of the most laid back but solid service we had experienced on the trip. It was a bit strange to us that they didn’t have their blue plate special up until an hour into their dinner hour, but I did enjoy the matzo ball soup, with its simple but showstopping smoked chicken and generous whack of dill. 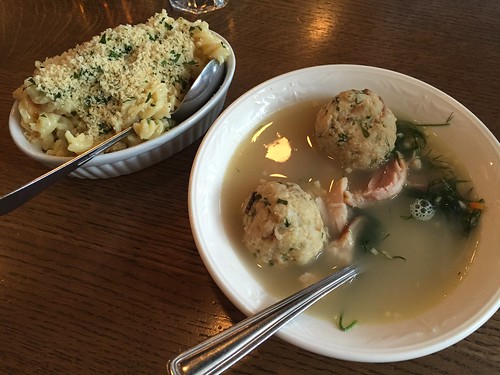 Thai restaurant Khao San Road is known for its epic evening line-ups (my sister had to wait close to two hours once), so we felt fortunate to be able to try their menu as a daytime lunch "pop-up" at their sister restaurant Nana. It felt pricey for the portion size, but that’s typical of Toronto. 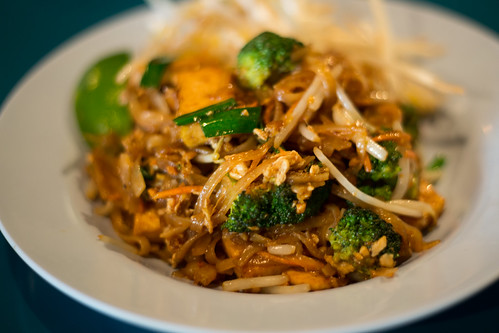 At least Mack’s green curry had a generous amount of chicken, and by the end, I was satisfied with my Bankok-style pad thai. 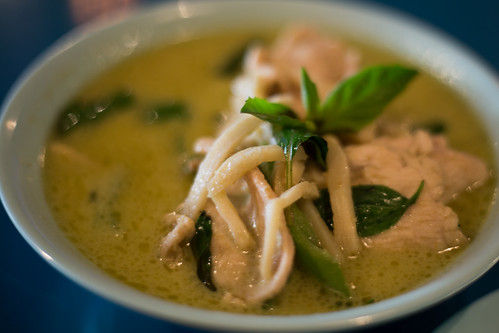 Colette Grand Café was Amanda’s pick, and very much could be the sister restaurant of Figo. It had the same Parisian feel, with natural light, pastels, and marble tabletops, and felt like the sort of restaurant frequented by girlfriends in heels. Our server thankfully removed any pretentiousness we would have otherwise felt. I really enjoyed their version of French onion soup, enhanced with textures of oxtail pieces and crispy fried onions. The roasted carrot salad with flavours of cumin, coriander, creamy sheep’s milk and Aleppo pepper is also something I will try to replicate at home. 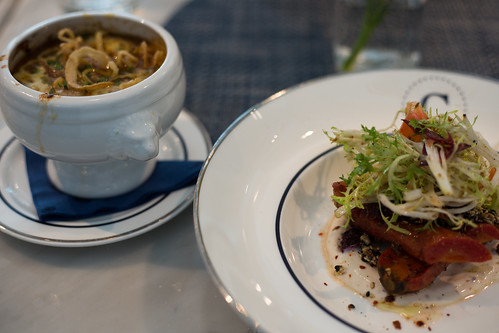 Amanda most liked the dessert, a delectable layered raspberry cheesecake fit for Instagram. 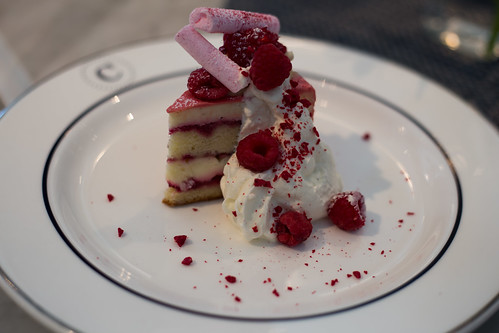 Old School, a Blog T.O. recommendation for brunch, was perhaps our most disappointing meal. Everything in the restaurant, from the fake chalkboard wallpaper to the leather apron-wearing servers, seemed manufactured and disingenuous. 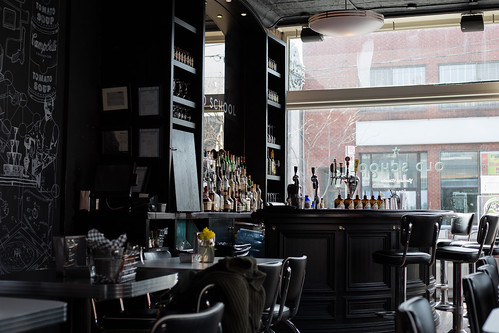 The food was just not good – the fruit was obviously past its prime, and the chive biscuits were several days old. Their "butchers crack" sugared bacon was also unnecessarily chewy. 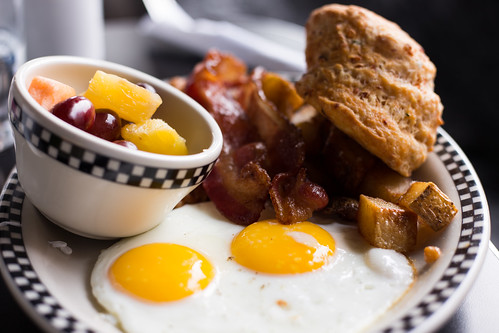 We also hit up a few coffee shops that were new to us. I’ve been wanting to stop by White Squirrel for a while, and finally made it in. It wasn’t warm enough to order from the take out window facing the sidewalk, but I still got to snap a picture next to a pair of sweet pugs just outside the cafe. 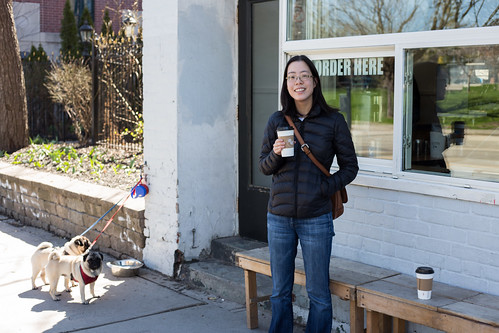 Thor was a sanctuary off busy Bathurst, and produced the best Americano I’ve had in some time. In the middle of the afternoon, it was busy, but not at all with sit down patrons – folks rushed in for their shot and were out the door in no time. 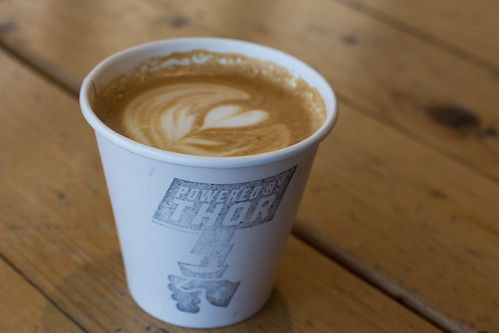 I’m glad we found some new favourites in Toronto, and had the chance to get outside of the city too – more on that next week.

2 thoughts on “Back to the 6ix: All About the Food”