The UN General Assembly declared 2016 as the International Year of Pulses, highlighting their affordability, nutritional value and sustainability. As nearly 10% of Alberta’s crop acres are dedicated to growing pulses, it is a good time to promote this commodity at home.

Mack and I were invited to attend a recent event hosted by the Canadian Association of Foodservice Professionals (CAFP) at NAIT celebrating this hallmark year for pulses. The CAFP is a national organization that represents chefs, hospitality representatives, food manufacturers and nutritionists, among others. Local branches host learning opportunities for their members, including visits to area food production facilities. In February, in collaboration with Alberta Pulse, the Edmonton branch explored the topic of pulses. 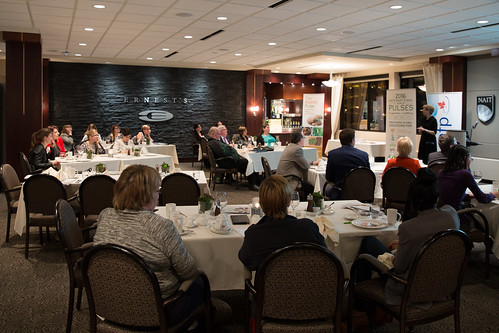 It’s a subject I’ve been learning more about in the kitchen for a few years now. After reading Mark Bittman’s Food Matters more than five years ago (his mission was to encourage more conscious consumption of non-meat proteins), I was inspired to start including more beans and lentils in our diet. In 2011, Julie Van Rosendaal and Sue Duncan’s cookbook, Spilling the Beans, was released, becoming one of our go-to guides for meal inspirations. Now, pulses have just become a part of our regular rotation, both as a meat alternative but also to enhance soups, salads and mains, stretching the meal all while adding nutrients. At this point, our pantry and freezer would feel bare without having some variety of pulses on hand. 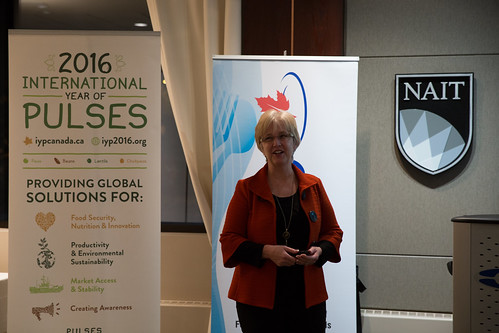 That said, the presentations that evening were informative, especially to provide a local context. Farmer and chair of the Alberta Pulse Board, Allison Ammeter, shared the following:

Alberta grows a variety of pulses: primarily peas (green, yellow, marrowfat), but also beans (great northern, black, cranberry, pink, small red), lentils (red, green) and chickpeas. And though most are familiar with whole pulses, they can be purchased as flour products as well.

It’s also an unfortunate reality that it’s not easy to locate "product of Alberta" pulses. Unless it is packaged in the province, even locally-grown products end up with a broader "product of Canada" label. Perhaps in the grand scheme of things, it doesn’t matter if it lists the growing province, but it does make it more difficult for those hoping to source their food as locally as possible (thankfully in Edmonton, Gold Forest Grains does sell excellent organic red lentils). As the Minister of Agriculture was present that evening, I was hoping that some advocacy might have happened on the need for more production facilities in the province. 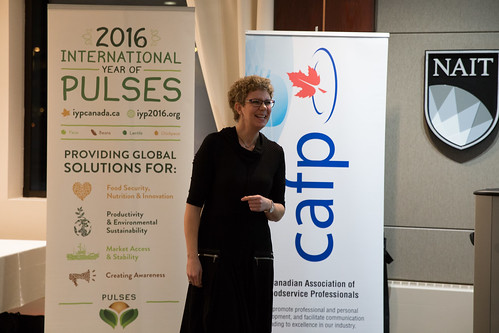 Pulses are also relatively light on the wallet, costing significantly less when compared with meat sources of protein. In the context of rising food prices, affecting everyone from consumers at home to restaurant operators, this spotlight on pulses couldn’t come at a better time.

In collaboration with the chefs at Ernest’s, Debra designed the evening’s menu to highlight the many sides of pulses. To start, we enjoyed a duo of yellow split pea soup and a pork croquette which used a white bean purée to bind the meat. 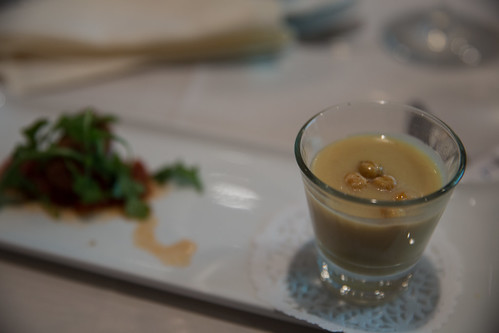 The entrée was a pan-roasted chicken served with a lentil and rice pilaf. The chicken was very well-prepared, and the pilaf tasty enough, but it was a missed opportunity not to highlight pulses as the main event (Indian-inspired dal, or falafel, for instance). 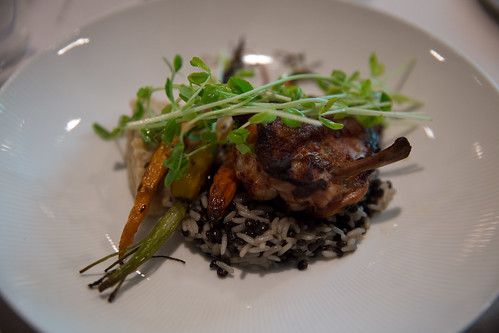 For dessert, we were treated to a lentil fudge pie. The pie incorporated a red lentil purée that could not be detected, taste-wise, and with the added nutrients, it’s almost a guilt-free dessert. That recipe can be found online at the Alberta Pulse website. 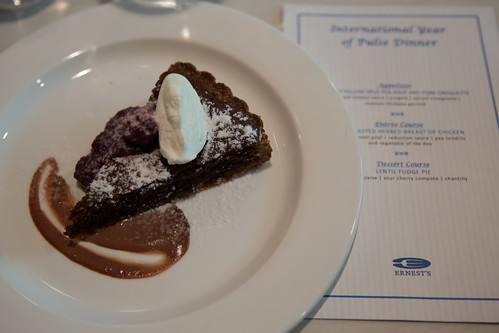 If you’re interested in learning more about pulses, check out more recipes at pulses.org, and consider taking the pulse pledge – all it takes is committing to eating a half cup of pulses per week.

Thanks to the CAFP and Alberta Pulse for having us!