MEÆT is an initiative of Edmonton’s Next Gen, and serves to crowdfund local initiatives. Part of the event ticket proceeds go towards the funding pot, and attendees vote for their favourite project. The events themselves are varied, and the carrot for Mack and I to attend our first MEÆT function was the unique concept: Dark MEÆT would involve a blindfolded dinner. Tickets to the event were $25, with $10 of that reserved for the project pot.

On that evening in May, Mack and I met up on the ground floor of the Epcor Tower, along with other guests. We were asked to blindfold ourselves with the supplied material, before being led in small groups into the elevator and up to the vacant, unfinished sixteenth floor (ironically of course, we weren’t able to enjoy the view with our dinner). 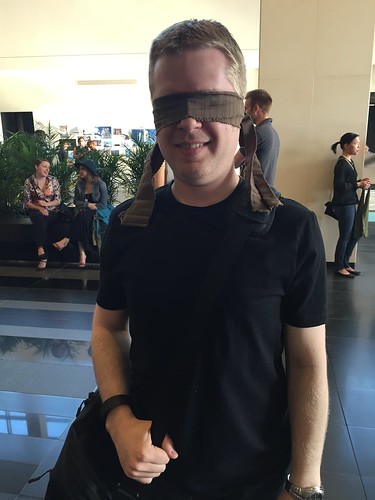 Blindfolded and ready to go!

Even the process of getting from the elevator to our seats reminded me of how much I take my sight for granted. The Next Gen volunteer asked me to put my hand on Mack’s shoulder, and asked Mack to hook his arm into hers. Because of the unfamiliar surroundings (and my fear of tripping over), I took uneasy baby steps all the way there. It was a relief when we were finally able to sit down. 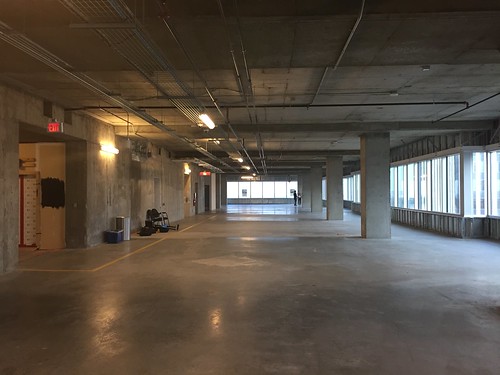 Sixteenth floor of the Epcor Tower

We were seated next to a couple we hadn’t met before. Unlike the typical handshakes, we introduced ourselves and did our best to conduct a conversation without knowing exactly where to look. In some ways, it was an insightful interaction, as we could make no judgments based on appearance – it was a literal blind date! 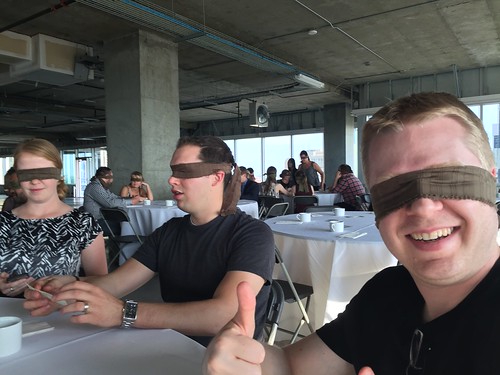 Thumbs up from Mack!

We were provided with a three course vegan dinner catered by The Mercury Room. The first course of noodles with red onion and jackfruit was fine (and was surprisingly easy to eat blind), but the main of couscous arancini and chickpea skewers was unfortunately bland. There also wasn’t clear communication between the chef and the volunteers, as it was only announced after the fact that there were nuts in the dish. The dessert, an ice cream, was a good way to end the meal. 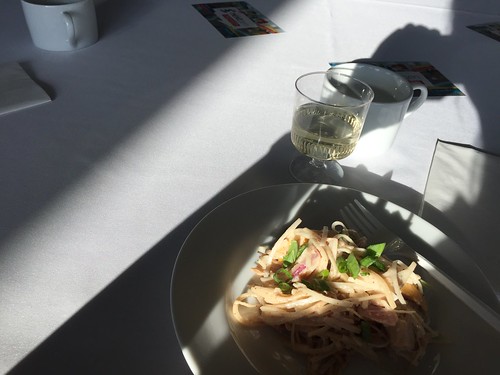 In between courses, we were treated to some entertainment as well as the pitches themselves. Chris Bullough and Jana O’Connor put on a fun radio play complete with sound effects. 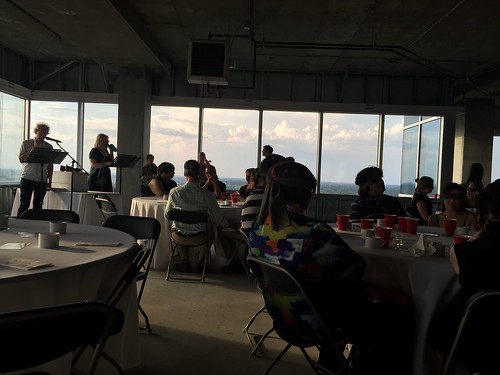 Chris and Janna perform (I could hear the direction of their stomping, so got lucky with this photo!)

Four projects were pitched that night: the RISE Heart Garden, recognizing the lasting impacts of residential schools; Barking Buffalo Café, a new local business on 124 Street; a sexual health clinic based at the University of Alberta; and the Youth Restorative Action Project, which provides youth involved with the justice system support and stability. YRAP ended up with a majority of the votes, and took home the funding pot.

After dinner, we took off our blindfolds and were given the run of the space, including the balconies. Mack had seen the view before, but I appreciated that vantage point for the first time, admiring the forthcoming additions to the downtown core from above. 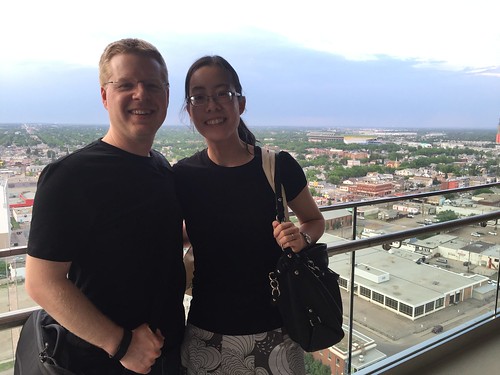 Mack and I enjoyed the view

In spite of the construction, this perspective made clear how many surface parking lots still exist around Rogers Place. It’s a shame the space (while it remains vacant) couldn’t be opened up to the public as a paid viewing point. 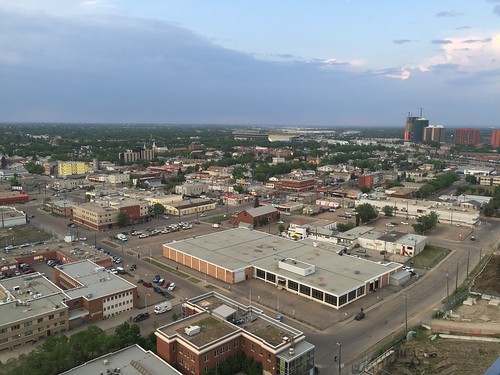 Thanks to the Edmonton Next Gen volunteers for organizing a unique evening!