I’ve been feeling a bit nostalgic lately (it’s no coincidence the series finale of Mad Men drove me to rewatch “The Wheel”, featuring Don’s famous carousel speech). But in the lead up to our fifth season of What the Truck?!, I’ve been reflecting more on where we started.

Some may remember that first event in June 2011, seven trucks huddled between the decorative poles in Beaver Hills House Park. Mack and I were floored that Edmontonians came out, in spite of the rain, to gather, eat and share – it was a demonstration of an appetite for great food to be enjoyed outdoors during our short but brilliant summers.

True to the mobile nature of food trucks, over the years, we’ve continued to shift our festival locations to a number of central neighbourhoods, like Oliver’s Victoria Promenade (anecdotally, our most popular event), Old Strathcona’s family-friendly Gazebo Park, the recently renovated Borden Park by Northlands, and the underutilized Louise McKinney in our beautiful river valley.

Our events have mirrored the increase the number of food trucks vending in Edmonton, growing from seven at that first event to nearly two dozen at our event last September. With more than sixty-five trucks registered this season, we’ll be doing our best to highlight as many as we can. That said, because mobile vendors have become mainstream, found at farmers’ markets, community gatherings, and other food festivals, What the Truck?! has to adapt to stay relevant.

This year, What the Truck?! will be focusing only on large events, to ensure we can cast a spotlight on trucks both new and experienced. You can expect that our gatherings will feature at least fifteen trucks or more, providing a variety of food not found elsewhere. 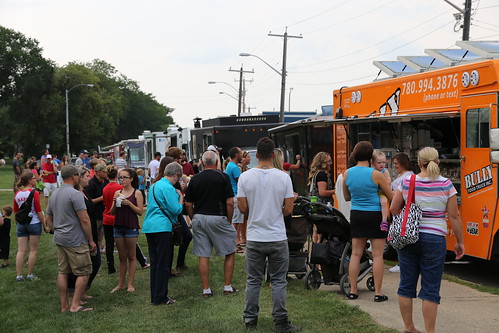 We also believe that What the Truck?! can still play a key role in using food trucks as a conduit to encourage exploration of some of Edmonton’s hidden gems. We’ll be releasing the details of our season later this month, but we hope you’ll be as excited about our new locations as we are!

For the first event of the season, we’ve decided to return to Churchill Square. The reality is – we’ve outgrown most other sites, and it’s hard to beat the central, accessible and open space of the Square.

Even with the ever-growing interest in food trucks, the organizing team (now a group of seven!) has been blown away by the online response to our first event – over 10,000 people have RSVP’d already. We’ve posted the menus, so folks can start to plan their attack, and if you’ve never been before, please review our tips for attendees to make the most of your experience.

We hope you’re as excited for the season as we are – see you on Saturday!

2 thoughts on “What the Truck?! Season 5 Kick-Off”