I recognize that I am biased towards selecting restaurants that are centrally-located, or establishments that are transit-accessible. When I’m on my own, walking or utilizing transit are my only means of transportation, and with Mack, we typically choose to spend the least amount of time in our vehicle as possible. So when a few friends and I chose a southside restaurant for dinner Thursday night, I was grateful for carpooling from a transit hub and as the snow continued to accumulate, the fact that the driver had a jeep.

Noodle Feast has been open in an inconspicuous strip mall off Gateway Boulevard for nearly two years. I would have probably continued to be unaware of its existence without Maria, who had tried the restaurant once before. Noodle Feast offers a “taste of Northern China”, with a specialty of hand pulled, house made noodles.

The storefront itself is clean, but plain; a blank canvas where the obvious focus is on the food. Even on that cold winter night, most of the tables were occupied when we arrived.

The menu may look intimidating at first glance, but the base options involve sliced, rolling or hand pulled noodles. Different meats, soups and toppings rounded out the iterations. Illustrations would have helped distinguish between noodle varieties, but half the fun was playing dish roulette. We also chose one plate from the “other” section of the menu, which featured pancakes, fried rice and dumplings, among other things.

The food arrived swiftly, but short of that, service was non-existent. To have our tea refilled, we had to bring the pot to the counter. But the food definitely made up for some things.

It is difficult for me to choose the better of the two noodle dishes, but because the rolling noodles (with minced pork sauce and hot chili oil, $11.95) reminded me of street food dishes I’ve had in Asia, it edged out the other slightly. Don’t be afraid of the chili – the heat was mild and warming. The noodles, fresh out of their bath, lapped up the surrounding sauce, meaning each bite was deliciously enrobed. 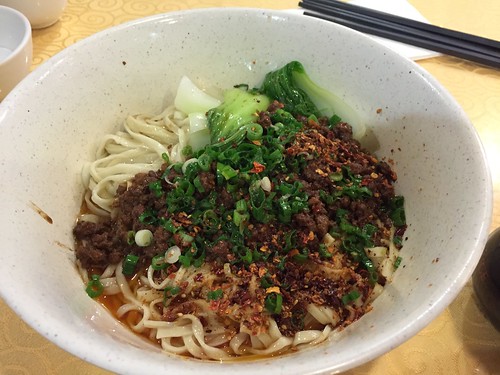 The hand pulled noodles served with beef in soup ($11.95) was also a standout. The individual components of the dish were superb: the beef had been stewed into submission, with just an ounce of fat; the noodles were springy and substantial, about the width of a ruler; and the broth was full of flavour and depth. 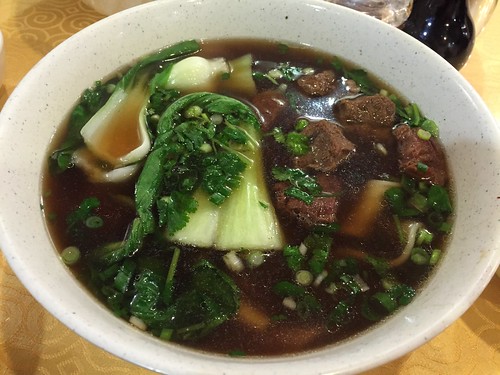 The Chinese chives and pork dumplings ($10.95) were great to nibble at, especially between the three of us. But though they were tasty enough, the dumplings stood a distant third in my eyes. 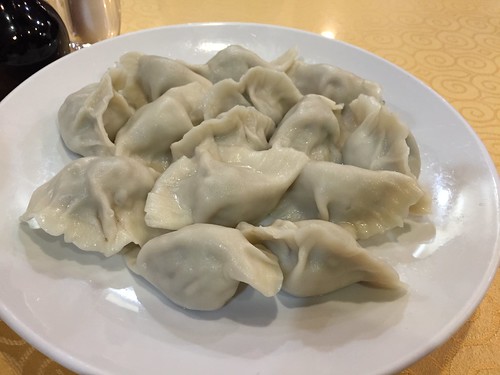 In spite of the barely-there service, Noodle Feast was a welcome respite from the cold, serving up high-quality, reasonably priced food. It was a worthwhile trip to take, and one I will likely make again soon.