The Canadian Finals Rodeo is back again for its 42nd edition, taking over Northlands next week. To engage Edmontonians and visitors alike, Rodeo Week is taking place from November 7-15, 2015, in conjunction with the CFR. Events include a family-friendly wild wagon race at Fort Edmonton Park, a mechanical bull riding championship at Cook County Saloon and the popular chili cook-off at Churchill Square. 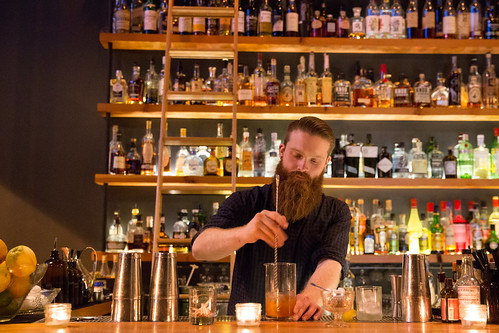 The tie-in extends to 17 local restaurants who have put their best rodeo-inspired dishes forward to ensure diners can get in on the fun, too. On Sunday, Mack and I joined Andrea, Linda and their respective partners on a food crawl organized by Edmonton Tourism to preview some of the dishes on this “Best of the West” menu.

Woodwork has a great cocktail program, so we were looking forward to sampling their feature drink, the Campfire Rambler. Made with High West Campfire Whiskey, vermouth and maraschino liqueur, it was a spirit-forward drink meant for sipping. I appreciated the chilled glass that kept the cocktail cool enough to enjoy. 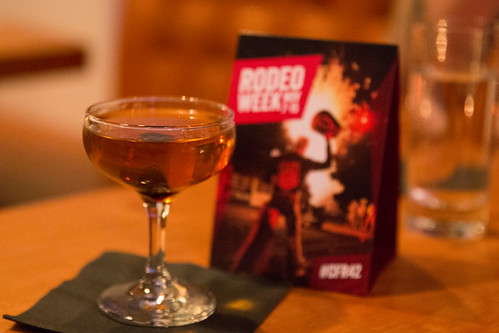 The Colleen’s Amber Ale chili served in a sourdough bread bowl ($14) is sure to be a crowd-pleaser at Sherlock Holmes.  Mack very much enjoyed the fact that the thick, hearty chili was heavy on the meat – sometimes straightforward is best, and indeed, this was Mack’s favourite dish. 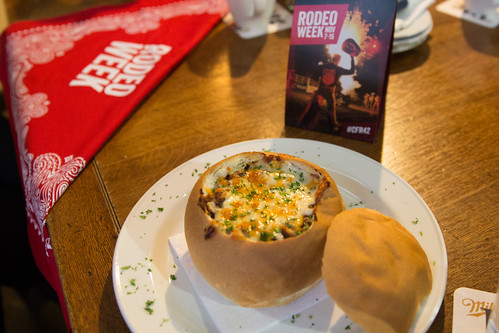 The Confederation Lounge at the Fairmont Hotel MacDonald has one of the coziest tables downtown, surrounded with leather loungers and situated next to a roaring fireplace. With a wicked wind outside, it was an ideal place to warm up and get our bearings.

Not content to feature just one menu item, the Fairmont Hotel MacDonald has two. The wonton nachos ($19) were the most unique plate we tried that day, layered with braised pork cheeks, scallions, cheese and wasabi aioli. In some ways, the substitution of deep fried wonton skins better highlighted the toppings, given they are more neutral in flavour than corn-based chips. 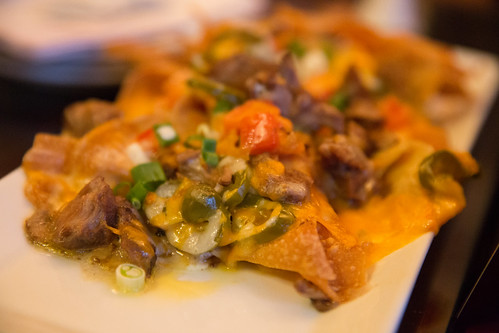 My favourite dish was the chorizo sausage ($21), generously topped with beef chili, smoked cheddar and mustard crème fraiche. The sausage was great on its own, but the flavour was amplified with the addition of the chili. It is definitely something I’d order again. 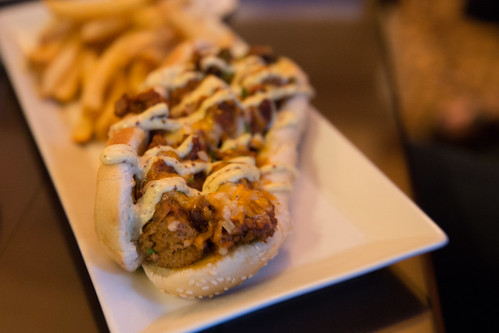 We were also encouraged to order drinks. Mack and I couldn’t resist the Game On Martini, designed to be the shade of Oilers blue. It was definitely on the sweet side, which I enjoyed. The Mac happened to be running a photo contest involving their special martini on social media. After entering, I was randomly selected and won a pair of tickets to an Oilers game. Needless to say, it was a good night. 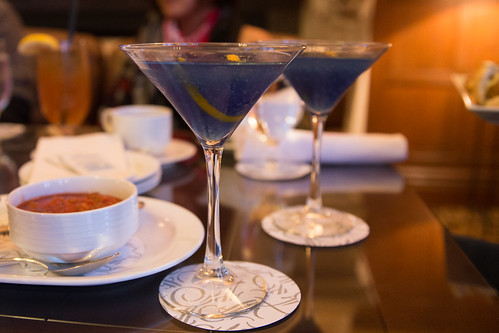 The Best of the West menu is available from October 26 until November 15, 2015. Thanks again to Edmonton Tourism for having us!

When Amanda and I walked into Woodwork for the first time, we both were struck by how much the restaurant reminded us of Toronto. Located in a heritage building, with a serious cocktail menu and a high hipster quotient, the only thing that grounded us in Edmonton was the reality that spaces in Toronto are much more narrow.

Woodwork is a collaboration between Chef Mike Scorgie of the Nomad Food Truck, and Barman Andrew Borley of the Volstead Act. It’s been a long time coming for the restaurant – they celebrated the start of construction with a pig roast pop-up back in April, and after assembling a bar and restaurant from scratch, Woodwork opened its doors in December.

As a downtown resident, it’s always heartening to see a restaurant like Woodwork open up in the neighbourhood. It’s these unique businesses that draw clientele from across the city because their take on food and drink cannot be found anywhere else. Adding to an immediate area already populated with Corso 32 and Tres Carnales, I’m not ashamed to say – keep the dining wealth coming!

I’ve been to Woodwork twice already. Once, on a Sunday in late December with a girlfriend, and more recently, last Friday with my family. Both times it was busy, buzzing with the energy that comes with being the newest kid on the block. Décor was minimal, which further showcases both their impressive bar and open kitchen. Mack also commented that their neon sign, coloured blue, also lends a soft, complementary glow to the entrance.

Since my first visit, Woodwork has made some changes to help manage the temperature of the space. Seated by the front on both occasions, the installation of a door closure and an overhead heater made a noticeable difference. That said, an L-shaped glass partition would do wonders to direct the chill away from the tables – this is definitely a challenge we face in our winter city!

With their attention to detail in everything from the selection of spirits to their ice-making process, Woodwork is raising the bar with their drinks menu. I appreciated the description under each of their creations, and the range of cocktails available (i.e., a take on the Old Fashioned for Mack and sweeter concoctions for me).

As found on many on-trend menus, there is the option to order snacks, in addition to the usual smaller and large plates, sides and desserts. With May, we decided to sample the smaller dishes. On vacation detox, I ordered the brassica salad ($13), a tasty combination of kale, charred cauliflower, tomato, aged cheese and a poached egg. I loved the pickled onions, and my only nitpick was for the kale to have been torn into smaller pieces.

The Nomad baked beans, topped with charred pepper crème fraiche ($11) was a much larger serving than I was expecting. Though I could have used more bread, the beans had a nice sweetness. As a bonus, the leftovers made a great lazy lunch the next day.

May’s smoked chicken drumsticks ($8) was an equally generous serving (classified as a “snack”, after all), and she enjoyed them well enough. The chowder St. Jacques ($13) was her favourite, containing a well-cooked scallop and a cheddar biscuit. The shallow bowl made it more challenging to slurp up every bite, but it was worth it!

With my family, we shared a few sides, including the Saskatchewan yellow grits ($11) with red eye gravy and the mac n’ cheese ($14). The latter was no doubt their most popular truck offering, so we knew it had to make an appearance on their regular menu. In the restaurant, it has been upgraded to a cast-iron pan, piled high with pork crackling. It definitely had more heat than I remembered, but there were favourable comments all around.

The Toulouse for two ($29) consisted of sausage seasoned only with salt and pepper and Parisienne potatoes in a pork and onion reduction. This was my favourite dish; the kitchen was able to coax great flavour out of what could otherwise be a very basic item.

My sister’s confit of pork shoulder ($22) was gone before we knew it, flaked apart with her fork alone. And for someone who doesn’t usually like lentils, she finished all of the yolk-flecked side without complaint.

Mack’s hangar steak ($24) was a slight disappointment. Cooked close to well-done (as opposed to the promised medium rare), the steak could have been more charred, and less chewy. He did appreciate the beurre bercy, a butter containing reduced wine and shallots.

Thankfully, the kitchen wasn’t out of the peanut butter, chocolate and raspberry thang ($9) on my second visit. I’m not sure the presentation was appealing for me (given I’d just eaten the similarly shaped Toulouse), but the whipped peanut butter was delicious. Perhaps a mason jar could be used for serving, to visually denote the layers of flavour?

Service on both occasions was great, warm and friendly. It was busy throughout the evening, but we were never lost in the shuffle, and did not feel rushed.

This is just the beginning for Woodwork – with a solid menu of food and drinks, I look forward to watching this restaurant evolve with the seasons and become a fixture of the downtown restaurant scene.

To celebrate the start of construction at their upcoming storefront in the McLeod Building, the folks behind Woodwork decided to throw a pop-up party in another historic location! Mack and I headed to the Rossdale Brewery last night for the festivities.

The event started at 8pm, and we were glad we decided to arrive early – it filled up fast! The $10 ticket entitled the bearer to a plate of Nomad’s specialties. The kitchen staff were working hard at dishing out the plates, though the distribution was a bit haphazard, given it was difficult for the wait staff to keep track of who had already been served.

Pork is no doubt Nomad’s strength, and we thoroughly enjoyed the pulled pork and accompanying roasted apples. The smoked salmon over cucumber was a dainty two-bite appetizer, and the pickled vegetables were a nice touch.

The Volstead Act were offering four mixed drink options. We chose to share a Blinker, featuring Bulleit Bourbon, grapefruit juice, and house-made preserves. The bourbon was prominent, but I appreciated the balance from the juice and berries.

It was great to catch up with some familiar faces, who are equally looking forward to what will be Downtown Edmonton’s newest restaurant. If you can’t wait, make sure you consider a membership to their Sunday Dinner club, which will grant you access to four private seasonally-inspired dinners, or peruse the Top Shelf program, where you can have your very own bottle to return to at the bar!

It sounds like the blank slate of the McLeod space will be a blessing to Woodwork’s owners, as they can design it to specification, but just in case, here’s hoping for expedient construction!