Back in 2013, the Arbour Restaurant in the Rutherford House shut down due to staffing and financial issues. It was a loss to the local food scene to be sure – their afternoon tea (and legendary raspberry butter) was a favourite of many, but it was also unfortunate for the provincial historic site and the home of the first Premier of Alberta to be without a culinary anchor.

In October of last year, Vintage Fork took up the Arbour Restaurant’s mantle. Open during the day, they introduced a slightly different model – instead of the usual a la carte options, Vintage Fork offers up set multi-course menus for lunch. But it was learning that they would also be serving up afternoon tea that I was most excited about.

Two friends and I made a reservation for their first afternoon tea service in mid-November (offered on weekends between 3-5pm). At $34.99 per person, it’s one of the more reasonably priced afternoon teas available in the city (Cally’s Teas would be the most comparable). When we arrived, we found one other party of three seated in the sunroom. We were told word about their afternoon tea was still trickling out; we were just the third group to be served that day.

The furniture and arrangement of the room, as one would expect in a historically designated site, remained similar to its prior occupant. However, instead of the more traditional floral tablecloths, Vintage Fork has opted for butcher paper coverings, even offering guests pencil crayons to doodle during their meal if desired. 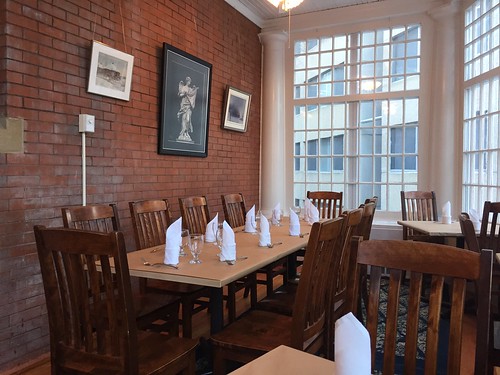 We were provided a selection of a dozen loose teas to choose from (jars are kept on the mantle in the adjacent room for those hoping to rely on their nose to help them narrow their pick). The servers may want to brush up on the tea options however; when asked about some of the different blends, they weren’t able to provide any information about the teas. On the positive end of the service front, when my friend had called to make the reservation, she had requested that any undercooked meats or seafood be left off our plates. Thankfully, they had this duly noted, and substituted beef for the smoked salmon normally provided.

No doubt, the presentation of the three-tier tray was a showstopper. Not only was the kitchen very generous with the serving portions, but everything we sampled was delicious. Among the items served were chicken skewers, braised beef, lemon meringue tarts, and croissants. 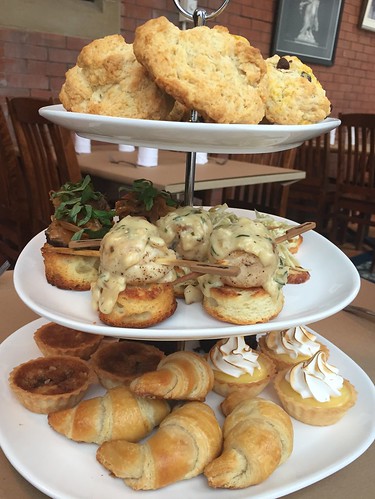 My favourite of all the treats were the scones. Fans of the Arbour Room’s raspberry butter will be disappointed to know that Vintage Fork serves the more traditional cream and jam, but these were excellent companions to the flaky, buttery scones.

We all left that day with intentions of returning again because we were so impressed. For me, this meant a visit two weeks later with Mack and Grandma Male just before Christmas. 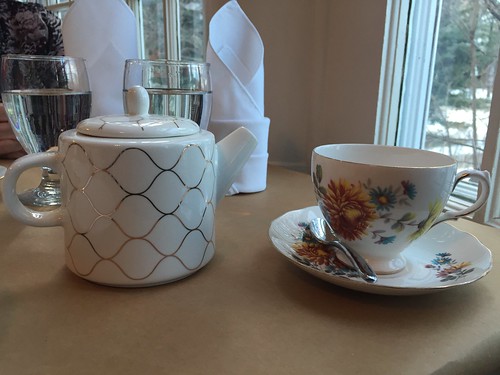 Understanding that they were still in the early stages of developing their tea service, I didn’t expect that everything from my first meal would be replicated, but I also didn’t anticipate an experience that took two steps back.

For starters, when I made the reservation, I had asked for a similar substitution regarding undercooked meats and seafood that my friend had requested. But this wasn’t noted anywhere, so smoked salmon ended up being among the savoury bites served. I simply gave my portion to Mack, but given their attention to detail on the previous occasion, I was disappointed they couldn’t follow through again.

It was also very obvious that the kitchen scaled back their portions, including (sadly for me) much smaller scones. The croissants, which the servers had highlighted on our first visit as scratch-made and had showcased the skill of the pastry chef, had also been dropped. 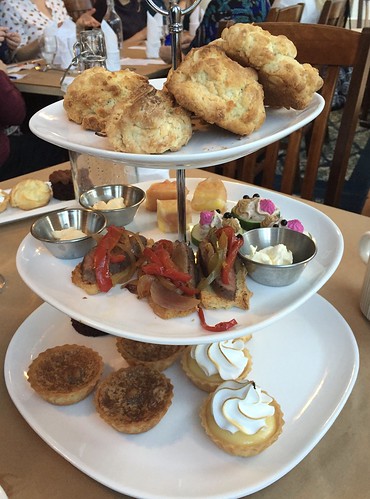 Perhaps most frustrating was the poor service we received after being seated. We had to request cutlery after our tea tray was delivered, and even then, no forks were provided (only butter knives). Staff only intermittently checked on us, even though we were one of just two groups being served that afternoon. To pay the bill, we had to physically notify the staff in the next room that we wanted to settle the cheque, a task that seemed like a burden for our server.

Given my two experiences were so different, it’s hard to reconcile them to determine what a future visit would entail. In all honesty, I will say that based on my second trip, I am hesitant to return again. But I do hope that with time, Vintage Fork will find their footing and find a happy medium where food and service expectations can be met on a consistent basis.