It seems ramen’s the thing in Edmonton right now. There were only a handful of restaurants serving this Japanese staple before this year, and the inventory has grown since then, with Kazoku Ramen joining the ranks this fall, and Prairie Noodle Shop’s pop-ups making way for a brick and mortar storefront soon.

Restaurants in St. Albert have joined this list as well, with Ohana-ya offering ramen for lunch on weekdays, and Yuzen complimenting that with ramen on Saturday afternoons. While in St. Albert last Saturday, we planned for a ramen brunch at the latter to make the most of the trip out.

We were told by friends to arrive early, but unbeknownst to us, Yuzen shifted their Saturday hours back half an hour, and now serve ramen from 11:00am-2pm. So our 11:30am arrival meant an already full house, and an approximately 30 minute wait for a table. 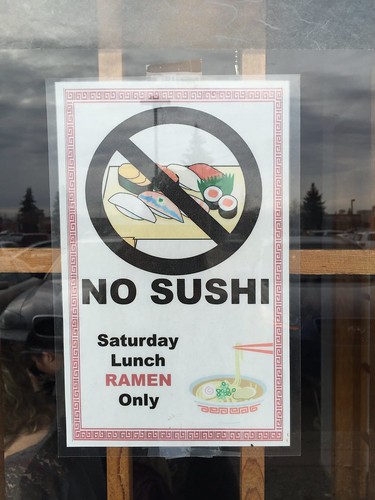 The menu is pretty straightforward, with 5 different bowls to choose from. I chose the pork-based tonkotsu ($11), while Mack selected the soy-based shoyu broth ($11). We each added an egg as well ($1).

Given the singular menu focus, the kitchen was able to maintain a fairly efficient speed. Service as a whole was also very pleasant and friendly throughout. 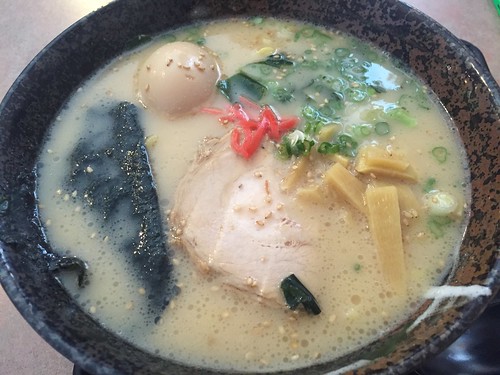 I quite enjoyed the tonkotsu broth, full-bodied and seasoned just right. Both Mack and I found the noodles well-cooked, and enjoyed finding a creamy yolk centre in our eggs. Our only complaint lay with the pork, sliced too thick for my preference and ultimately on the dry side. 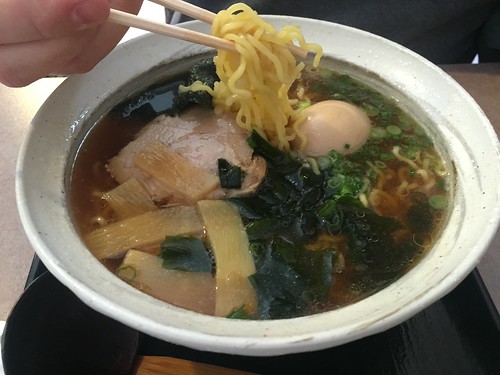 We were told the crowd was actually on the small side that day, so I think the word is getting out about St. Albert’s ramen brunch option. It is a bit too far for us to frequent often (Ninja Club is our current go-to), but I would consider it again when in the neighbourhood. 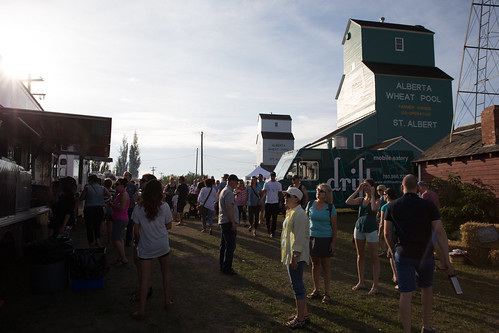 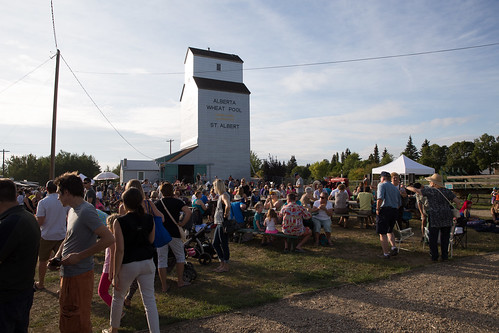 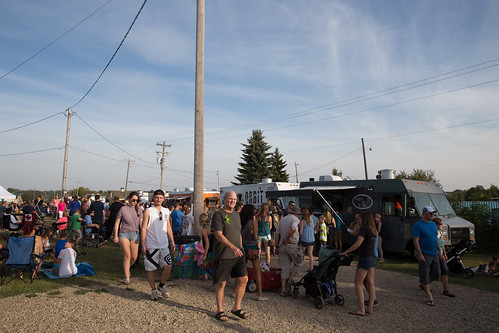 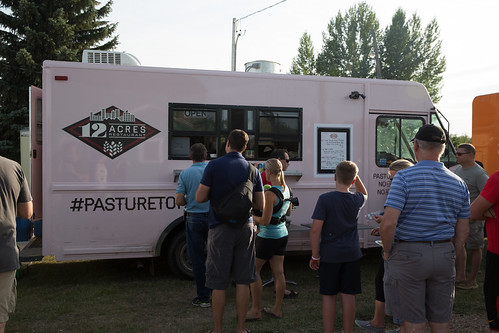 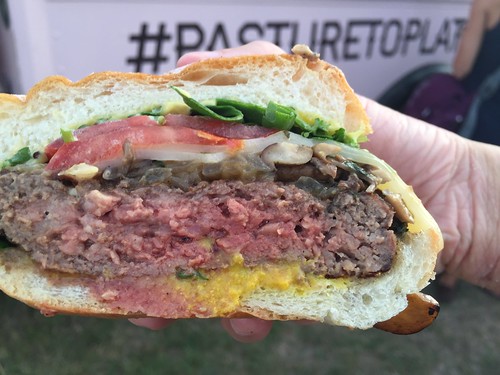 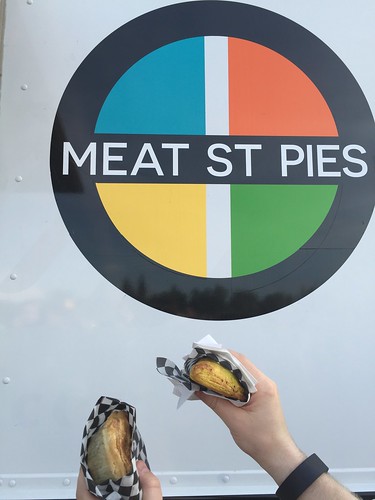 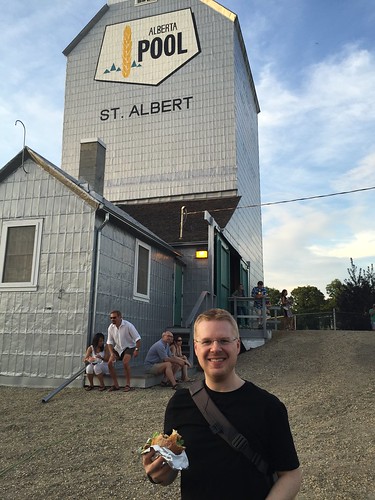 The newest food and wine festival on the scene is the Sturgeon Valley Food & Wine Festival, held this past Saturday for the very first time. Given the rising number of these types of events, it was very important that the Sturgeon Valley edition differentiate itself somehow. At first glance, it definitely edges out the others in terms of venue. The Enjoy Centre, with its glass ceiling and gorgeous sconces, outdoes both the Shaw and Expo Centre.

Mack and I were invited to attend for free, and were also lucky enough to receive $20 in sampling tickets. That said, I am not sold on this model (which is the same as the Rocky Mountain Wine & Food Festival), which charges admission cost and additional dollars for sampling tickets. As a patron, I’d much rather pay a steeper ticket price for an all-inclusive event.

For our admission period of 4-6:30pm, we found the crowds a bit sparse, but this was to our advantage – no lines, ample seating, and we felt we had more time and space to converse with the reps. I know at the Rocky Mountain Festival in the past, I have felt a bit claustrophobic at times, and somewhat rushed at certain tables with others jockeying in for samples.

Enjoy Centre (can you spot Phil and Robyn?)

There were about two dozen liquor and food vendors, but only three tables sampling wine. This was likely due to the fact that the festival ran over the same weekend as Co-Op’s Grape Escape, which featured sixty wine and spirits producers.

Because wine was not as prominent, it definitely drew our attention to the range of beers and spirits highlighted. Notably, this was our first encounter with Ribstone Creek Brewery, which, although no longer Alberta’s newest beer (that distinction probably belongs to Hog’s Head now), we were happy to learn about. It seems the founder wanted to build some sort of business in his hometown of Edgerton, Alberta, and settled on a brewery. It has already won some awards (silver for best domestic lager at the Calgary Beer Fest), and based on our taste, did find it to be quite a light beer (even for me, as a non-beer drinker).

We were also introduced to Solstice Botanical Vodka, a new vodka distilled by Yukon Brewery, which makes it the first craft brewery in Canada which is now also a craft distiller. The company wanted to make a unique spirit that combined herbs and berries available in the area, and with the guise of a local herbologist, steeped raspberries, rosehip and sage with the vodka to create the final product. It was noticeably smoother than more mainstream vodkas, though still probably a bit too harsh for me to sip straight up.

The first of the two wine vendors we patronized featured BC wine blends from Backyard Vineyard under the name Nosey Neighbour. Both the red and white we tried were pretty easy drinking wines.

On the other side of the spectrum was Chinese Happy Wine. A blend of white wine and Osmanthus flower, the vendor described it as a dessert wine. While it was sweet, the lingering aftertaste was not a memorable one (I also had to wonder at the price point – I’ve never seen a dessert wine priced at $8.70 a bottle).

Of course, we were also able to try some of the food offerings. Most of the restaurants represented are located in St. Albert, great for us given we don’t often frequent eateries in that area. First up was a teaser of mac and cheese and baked beans from La Crema Cafe and Smokehouse. Mack commented on the Velveeta-like consistency of the sauce, but we both really enjoyed the smoky-sweet beans with bits of bacon stirred in.

Mac and beans from La Crema Cafe and Smokehouse

Darcy’s Meat Market enticed us with their display, and we chose to try their applewood smoked pulled pork slider and handmade beef jerky. Neither was the most elegant to consume at an event like this, though we did our best. The slider could have used more sauce to bind and flavour the meat, while I prefer my jerky a little more dehydrated.

The star of the food samples was from The River House (though I don’t have a usable photo, unfortunately). Their braised short rib was hot, tender and delicious.

As a whole, we had a great experience. The Sturgeon Valley Food & Wine Festival has ample room to expand, both in the areas of food and drink. That said, hopefully they can manage their growth and maintain their great hospitality and the intimate nature of the event. Thanks again to the organizers for the invitation!